On War & Society: A Microhistory of an Ace

Episode #12–A Microhistory of an Ace 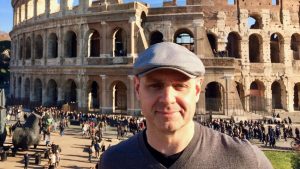 Billy Bishop is one of the most recognizable names in the military history of Canada. He was Canada’s top ace during the First World War, credited with over seventy victories during his career as a pilot with Royal Flying Corps. But there were many other pilots whose names have been forgotten because of Bishop’s looming shadow. Graham Broad, associate professor of history at King’s College at Western University, has uncovered the story of another ace, Eddie McKay, from London, Ontario. In this episode, Broad talks about not only the story of McKay, but also the process of researching and writing the story of McKay.

Graham Broad is an Associate Professor of History at King’s University College at Western University. He is the author of two books, A Small Price to Pay: Consumer Culture on the Canadian Home Front, 1939-1945 (UBC Press, 2013) and One in a Thousand: The Life and Death of Captain Eddie McKay, Royal Flying Corps (UTP, 2017).

Graham Broad, One in a Thousand: The Life and Death of Captain Eddie McKay, Royal Flying Corps. Toronto: University of Toronto Press, 2017.