On War & Society: In Search of the Canadian Officer with Dr. Geoff Hayes

Episode #8–In Search of the Canadian Officer

Many have fallen down the rabbit hole of over-researching. Telling the entire story is tempting, but it is an unattainable standard. Reconstructing the past out a series of texts simply cannot measure up to the multifaceted and dynamic realities of an all-encompassing history. And so it is imperative that historians abandon this idealized goal––if not for the sake of time, at least then for one’s sanity. 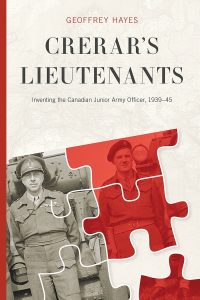 Dr. Geoff Hayes, an associate professor of history at the University of Waterloo, visited us this month to talk about his new book Crerar’s Lieutenants. But before we discussed its content, Geoff talked about the challenges of the project, from the initial search to the eventual discovery of a satisfactory framework, and the necessity of imposing self-limitations on one’s historical research.

Crerar’s Lieutenants unfolded over a period of many years, during which several drafts of the eventual manuscript were written. And with each revision, a new story was told. It wasn’t until he began to explore the Junior Army Officer through the lens of gender and masculinity though that Geoff finally found a framework that he felt was appropriate. It was an arduous journey to the final manuscript, but a fruitful one that led him to discover the military’s ideal Junior Army Officer, and how the real-life officers negotiated these ideals while fighting on the battlefields of the Second World War.

Hayes is also the author of Lincs: A History of the Lincoln and Welland Regiment; Waterloo County: An Illustrated History, as well as the co-editor of Vimy Ridge: A Canadian Reassessment; Canada and the Second World War: Essays in Honour of Terry Copp.

——. The Lincs: A History of the Lincoln and Welland Regiment at War. Waterloo: Laurier Centre for Military Strategic and Disarmament Studies, 1986.