“One of the Principal Weapons in Trench Warfare:” Hand Grenades and the Decline of Infantry on the Somme – Part 1/2 by William Stewart

The nature of operations in the present campaign has developed the employment of rifle and hand grenades both in attack and defense to such an extent that the grenade has become one of the principal weapons in trench warfare.

– The Training and Employment of Bombers – SS398

Grenades were an indispensable weapon of trench warfare, and in the right circumstances, they were brutally effective. By the Somme, however, they had become the dominant infantry weapon, but this predominance had pernicious effects on the infantry’s combat capabilities. This and the next blog entry will explore the advantages and disadvantages of grenade use, the deleterious effects of an over-reliance on them, and an example of how this dependence negatively affected the infantry. The first blog entry will focus on the description and advantages of grenades, with the second covering their disadvantages and the impacts.

For the purposes of this blog, I will focus on the Mills grenade to keep the entries at a manageable length. Outside the scope of the discussion are the four patterns of rifle grenades and one smoke grenade employed by the Canadians. I will follow British terminology, which rather oddly referred to the men trained to use grenades as bombers. The term grenadier was reserved exclusively for members of the British Army’s prestigious Grenadier Guards regiment. Confusingly, men using rifle grenades were called rifle-grenadiers. Operational orders and after action reports on the Somme used bombs and grenades interchangeably to describe the Mills grenade and I will follow that practice.

The bombs first issued to the army in 1914 and 1915 were dangerous weapons, often as much to the wielder as to the target. They required considerable training and practice to reduce the risk of misfires and premature explosions. As a result, the bombers were pulled out of the line infantry and concentrated into company, battalion, and brigade bombing sections. This made sense given the delicate and potentially lethal aspects of the bombing contraptions in use. By the time of the Somme, the British had standardized on the Mills Number 5 Mark 1 grenade. Invented in January 1915, the British manufactured more than 75,000,000 Mills grenades of all patterns during the war. The Mills was a reliable and effective weapon, and Commonwealth armies and others used it and its derivatives until well after the Second World War. It was a defensive weapon in that its blast effect radius was greater than the distance it could normally be thrown. This meant the bomber had to take shelter as soon as they threw the grenade or risk injury or death.  Weighing 638 grams, the grenade’s primary components consisted of a segmented body filled with an ammonal or amatol explosive, a detonator, a lever, and a safety pin. Prior to battle, the bombers armed the grenades by unscrewing the base cap, inserting the detonator, and screwing on the base cap.

In battle, the bomber would depress the lever, pull the safety pin, and throw the grenade, which had a four to five-second fuse at this point – initially the fuse was seven seconds, which gave time for the Germans to throw the grenade back. The grenade’s effects were two fold when it exploded. First, the body of the grenade shattered into irregular shards that could inflict injury up to 30 metres in distance. Second, it had a blast effect that could stun the enemy, especially in an enclosed area such as a trench or dugout. Soldiers learned to throw the bomb overhand like a British cricket bowler and were expected to master throwing from a standing and kneeling position, in the open or a deep trench. In a general attack rather than a raid, all members of the bomb squad including the throwers carried rifles, in addition to their grenades. 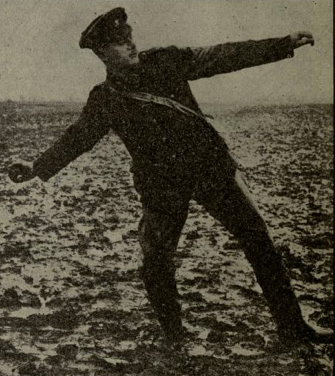 Staged photo earlier than 1916 showing a bomber at the ready position to throw. He has about five seconds to find cover or risk injury. (The Training and Employment of Bombers – SS398, [General Staff at GHQ, September 1916], Plate 1.)

Bomber in a Deep Trench

Throwing from a deep trench. In battle conditions, the bomber would wear a helmet and was encumbered with a rifle and other paraphernalia that restricted the distance they could throw. (The Training and Employment of Bombers – SS398, [General Staff at GHQ, September 1916], Plate 4.)

The Mills had five significant advantages over other infantry weapons that made it more effective in the conditions on the Somme and contributed to an over-reliance on bombing. Unlike rifle fire, which in an attack required exposing the head and part of the torso to return fire, the bomb thrower could remain sheltered to throw. Of course, this reduced distance and accuracy, but to a soldier, hearing the clatter and feeling the clods of earth thrown up by machine gun fire, and the howl, explosions, and debris of shells, it was a worthwhile trade-off. Being an area effect weapon, this resulting inaccuracy was less of a concern than with rifle fire where accuracy was necessary. The old adage is close only counts in horseshoes and hand grenades applied here. Further, bombers advancing along an intact trench system were sheltered from enemy rifle, machine gun, and artillery fire.

The grenade was an impersonal weapon, where the bomb thrower did not have to see the enemy directly. In battle, it was discovered that only a portion of riflemen would fire at an enemy because of reluctance to kill or injure. Recognizing this reality, the authorities ensured recruit training was oriented to foster aggression to overcome this inhibition – this was one of the reasons for the emphasis on bayonet training. As the bomber often could not see the enemy, it was likely bombs were thrown at a higher rate than rifles fired.

The grenade’s fragmentation and blast effects could knock out multiple enemies in trenches and dugouts, unlike the single shot effects of a rifle. In trench fighting, the defender had all the advantages in a direct fire engagement where the attacker tried to advance along a trench. The defender could take cover, so they were only partially exposed while the attacker had to move out of cover to attack. Bombs removed this advantage and equalized the situation between the attacker and defender, making it indispensable for trench fighting.

It took less time in training to create rudimentary skills at grenade throwing than developing accurate rifle fire. In 1917, Canadian rifle training in England—called musketry in another of those wonderful throwback terms to a different era— scheduled 153 hours for musketry versus 12 for bomb training.[1] However, additional training and constant practice was required to develop and maintain a fully proficient bomber. This meant that given the paucity of training received by replacements on the Somme, units would tend to rely on bombing because their replacements were likely more capable with bombs than their rifles. Senior officers complained about the deterioration of rifle skills—one British battalion commander went so far as to claim that the English archers at Agincourt were more effective at ranged fire than his men.

Grenades had the merit of working in almost any condition—vital in situations where mud and water were ubiquitous, such as on the Somme in October and November 1916. Rifles, Lewis Guns, and pistols were likely to jam when the conditions were at their worst, while grenades could be counted on to continue to function. At the Battle of St. Eloi Craters, the Canadian defenders facing the attacking Germans in the early morning hours of 6 April 1916 were reduced to throwing grenades until their supply ran out because their rifles and Lewis Guns were hopelessly jammed with mud.[2]

Grenades had their uses and considerable advantages, but they also had significant disadvantages that allied with the organization of bombers contributed to a less effective infantry force on the Somme. This will be reviewed in the next blog entry.