The young clerk sits me down in the waiting room, the walls covered in posters and pamphlets. Across the room a mother and her son half nervously and half excitedly discuss something they’re reading. After waiting six months for my records to clear I’m finally here, waiting for the offer. I get called into the office and the burly artillery officer tells me bluntly that because I’m colour blind nearly every choice of trade is off the table except the infantry or armoured. He recommends armour because infantry is back-breaking work and he probably didn’t think my scrawny frame could handle it – I quickly agree with him and sign the stack of papers to enlist in the armour corps. This is how I joined the military in 2008. The more difficult and most frequently asked question is why I joined. When I signed that piece of paper, I had no idea what the armour corps was (are there tanks in Canada?) and definitely had no idea what I would be doing: I just knew I wanted to get that tan uniform on and go to Afghanistan. 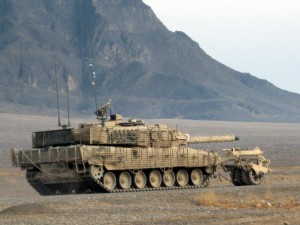 Leopard C2 with Mine Rollers in Panjwai

When I graduated high school in 2006, almost every day the cover of the newspaper featured portraits of men and women killed in Afghanistan. This bothered me. It bothered me that they were fighting and dying, while I was living in comfort and safety in Canada. This might be misconstrued for blind jingoism, but it’s far from it. I believe that there are some ideas worth dying for, even if I didn’t fully understand what those ideas meant. Philosopher Albert Camus writes that no one has died for an ontological argument, but plenty of people are willing to die for an idea (or illusion) that gives a reason for living.[1] At the age of twenty I felt (and still feel) that there are endless things worth living and dying for. There are complex and well-articulated arguments and philosophical treatises regarding justice and reasoning for war, but to my twenty-year-old self the reason was far simpler: that the idea of justice is worth dying for, fueled by a keen thirst for adventure. An answer too simple for even myself to accept now, seven years later. 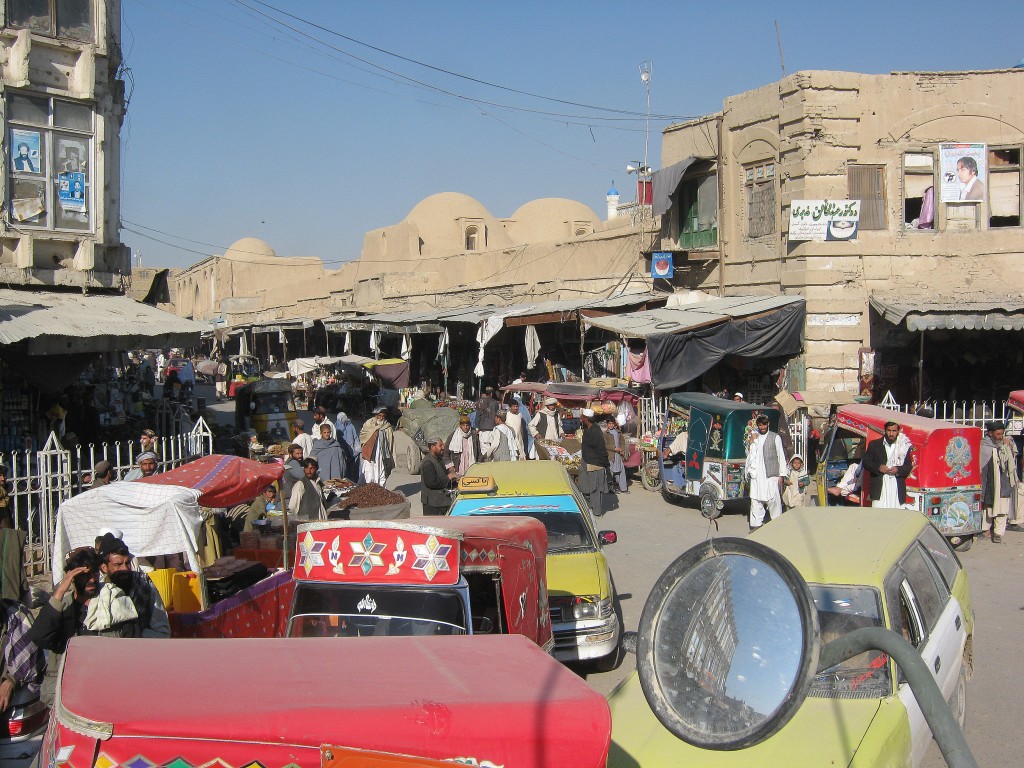 Leading a convoy through Kandahar City

Following basic training, I was told I would be going to Petawawa to join the Royal Canadian Dragoons, a regiment within the Royal Canadian Armour Corps or Calvary. Historically, the roles of each regiment have shifted, but normally they are comprised of two aspects: heavy or light armoured squadrons. I was assigned to B (not ‘bravo’) Squadron, a light armour squadron that performs reconnaissance and scouting tasks. Scouting is a high-speed role in which specialized small units gain information on terrain and enemies prior to the main force. To perform this task, we used light armoured vehicles called Coyotes that are equipped with a 25mm chain gun and two 7.66mm machine guns. These vehicles are able to hold four crewmembers: a driver, surveillance operator, gunner and crew commander. Being the newest recruit to the squadron, I would become either a driver or a surveillance operator depending on my performance during training and need.

Training for war is a process designed to determine if soldiers are physically, mentally and emotionally capable of performing under high-levels of stress for extended periods of time. Most Canadian soldiers would normally receive brief training of 6 months before being sent off. We were lucky to have almost a full year including two six-week exercises of ‘operations-style’ training in Alberta, a measure of how soldiers cope with distance from loved ones and how well they can do their jobs in unfamiliar territory. Only about 2/3 of those training with the Dragoons would be given a highly coveted position to deploy. I was selected to drive for 63D (delta), the most junior of eight vehicles, and one of the most dangerous (and most expendable) positions to be in, as we would be tasked with leading patrols, although the difference between other vehicles’ danger level is probably only marginal at best.

Our squadron was also responsible for repatriating members of our unit who were killed in action. I had the honour of attending in parade the repatriation of Trooper Brian Good, who was killed in Afghanistan in January 2009 while serving with D Squadron. Although our deployment was still nine months away, this experience made me acutely aware of the reality of what deployment truly meant. Other men in my regiment had multiple tours under their belts, with many having served in the early combat tours in 2006 & 2007 in Kandahar; they had no illusions about what we were heading into.

In the weeks leading up to deployment the realization that death was possible, perhaps even likely, began entering my mind in a subliminal way. Most families who had a spouse in the unit but no other reason to be there headed out of Petawawa. We began storing our cars, packing up our lives, and saying goodbye to our families. When I said goodbye to my mom, she did not believe me when I told her I wouldn’t be in a fatal situation. My row house became a boarding house, with five men sleeping on couches and mattresses in the last week. Everyone was a little nervous but all of us laughing, all the time. Laughter and jokes became our strongest defense against reality. 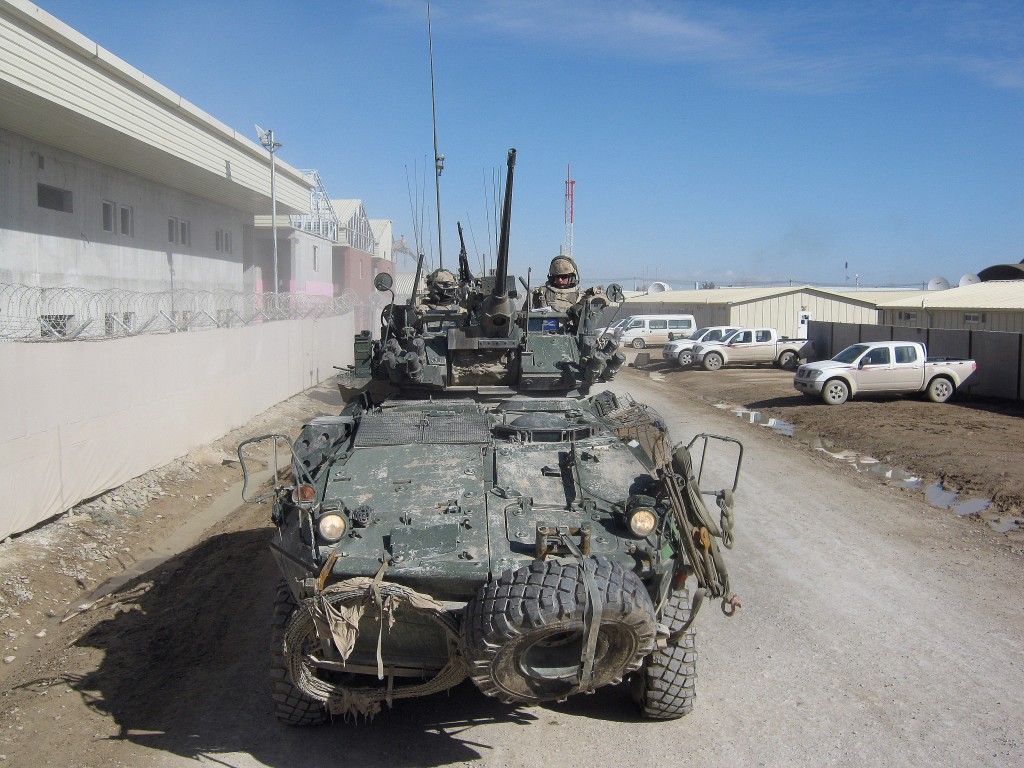 On the first of October, 2009, still drunk from the night before, we made our way to the bus that would take us to the airport where our transport to Afghanistan awaited us. A friend of mine, who fought in 2007 and was going on his second tour in 2009, had a former friend from his first tour seeing him off. The three of us were making small talk and joking while waiting to board when he casually asked me what my position was and I replied him – 63D driver. With that he stopped laughing, asked my full name, and with a firm handshake looked me in the eye and said, “Have a safe tour man”.

My friend told me on the bus that his friend had said that 63D drivers don’t usually make it home.

Corey Pembleton is Graduate Student at the University of Waterloo, studying Progressive Mapping and Analytics. He served in the military with the Royal Canadian Dragoons from 2008-2011, with a combat tour in Afghanistan. He has also written for the Guardian.

[1] Albert Camus, The Myth of Sisyphus And Other Essays. New York: Vintage Books, 1961.