Part I of “The Dieppe Raid Seventy Years On: Commemorations and Continuing Controversies” Guest Blog by David Hall

Seventy years on the anger and the pathos many Canadians experience when they consider the fateful Dieppe Raid of 19 August 1942, Canada’s worst military disaster in the Second World War, has not diminished.  Historians, surviving veterans, and those who have an interest in Canadian military history remain divided over their answers to even the most basic questions about the raid: what was the reason for the raid?  What was the gain?  Why Dieppe?  Why the Canadians?  Who was responsible?  What did the Germans know about the raid before it occurred?  Rarely if ever in war does a battle go according to plan and the planners and commanders of the Dieppe raid faced an extraordinary number of challenges for a small one day operation.  On Wednesday evening, Professor Terry Copp and Mike Bechthold of the LCMSDS conducted an interactive reassessment of the decisions made in planning and conducting the Dieppe Raid.  The results of this exercise will have increased the participants’ detailed knowledge of the raid and made them more aware of the many nuances of planning and conducting a complex military operation but will it have assuaged either their anger or their anguish over the raid’s apparent futility and failure, and the heavy loss of Canadian lives?

This weekend a number of commemorative events in Canada, the United Kingdom, and France will mark the sacrifices of those who fought, died, and survived at Dieppe.  In Hamilton, Ontario, the Royal Hamilton Light Infantry (RHLI) will hold a Dieppe dinner on Saturday night followed by its annual Dieppe Parade on Sunday morning.  A delegation from the regiment, including the present commanding officer, Lt Col Dan Stepaniuk, will be part of an official Canadian party led by the Governor General, His Excellency, the Right Honourable David Johnston and the Minister of Veterans Affairs, the Honourable Steven Blaney, MP, marking the 70th anniversary of the raid in Dieppe, France, on Sunday.  Commemorative events honouring the Essex Scottish, the Calgary Tanks, and les Fusiliers Mont Royal are also taking place in Windsor, Calgary, and Montreal respectively this weekend.

In the United Kingdom the main commemorative event is being held at the War Memorial Green in South Way, Newhaven.  The Lord Lieutenant, the High Sheriff, and the deputy mayor of Dieppe along with senior dignitaries from the Canadian High Commission and the US Embassy in London will be present along with representatives from the Royal British Legion and the Canadian Veterans Association of the UK.  Wreaths will be laid at the Canadian Memorial on the Green and the ceremony will conclude with a fly pass by the Battle of Britain Memorial Flight.  Smaller ceremonies will also take place at the Canadian Memorial in Green Park, London, and at The National Memorial Arboretum, the UK’s centre of remembrance, where a Dieppe Raid Memorial will be unveiled in the Allied Special Forces Grove.

The main commemorative event naturally is being held in Dieppe itself.  In addition to Canada’s Governor General and the Mayor of Dieppe, veterans of the raid, veterans associations, present members of the participating regiments, and national dignitaries of all the participating nations will be represented.  One of the veterans who will be part of the official commemorative events is 92 year old Fred Engelbrecht from Hamilton, Ontario.  Engelbrecht was one of 582 soldiers from the RHLI who landed at Dieppe on that fateful morning in August 1942.  His war, along with 173 of his comrades, ended that day when he became a prisoner of war.  Of his other regimental colleagues, 211 returned to the UK, most of them injured, and 197 were killed during the battle.  Before leaving Canada for Dieppe, Engelbrecht was interviewed by Kate Adach of CBC News.  He told Adach that he would never forget Dieppe and that despite his advanced years he ‘remembered everything like it was yesterday.  I could walk you through everything that happened on the beach.’  Summing up his searing experience at Dieppe seventy years ago he said: “The raid was a massacre, a complete massacre.  A stupid massacre of thousands of men.” 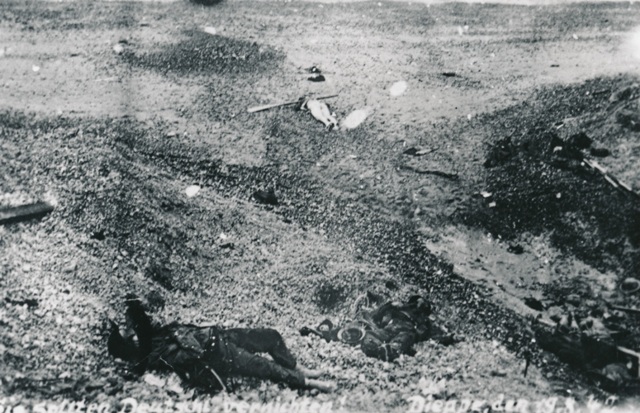 Beginning next week, after all of the commemorative events and services have concluded, this multi-part blog will examine the main controversies that still exist over the raid.  The rich historiography on the Dieppe Raid is dominated by two central debates.  The first centres on the question of who authorised the raid and was therefore was responsible for it taking place (and its disastrous consequences).  The second question is what did the Germans know about the raid before it was launched?  The main protagonists in the first debate are Brian Loring Villa and Peter Henshaw.  Villa contends that Mountbatten mounted the raid without the Chiefs of Staffs’ authority a point that Henshaw contests.  In the second debate the main protagonists are the controversial historian David Irving, who argues that the Germans had detailed intelligence warning of a seaborne attack on Dieppe weeks before the raid, and Stephen Roskill, one of the official British historians of the Second World War, who accused Irving of distorting the evidence to prove something that was not true.  Roskill is adamant that the Germans did not have any foreknowledge of the raid.  Both debates are far from concluded and new research has increased the likelihood that the controversies will continue rather than be resolved any time soon.

Beginning with the first debate on authorisation and responsibility for the raid you may want to watch Dieppe Uncovered on History Television Sunday evening at 9 p.m.  This documentary (repeated on History Television on Monday 20 August at 8 p.m.) by military historian David O’Keefe claims that the raid was cover for a top secret mission.  O’Keefe’s extensive research suggests that the real reason for the raid was to obtain through a ‘pinch operation’ aimed at the German naval headquarters in Dieppe the new four-rotor Enigma machine the Germans introduced in February 1942, the setting sheets for the coding machine, and German naval code books.  Presented as a television documentary rather than a scholarly paper, O’Keefe’s work premiers in Dieppe on Saturday 18 August in a theatre a mere 75 metres away from the Hôtel Moderne where the German naval headquarters were located.  Given the secrecy surrounding Ultra throughout the war this new material may challenge the existing narrative on who authorised the Dieppe raid and why it was prosecuted the way it was.

New material concerning German foreknowledge of the raid has also come to light.  The oral history collection at the Imperial War Museum in London contains testimony from German soldiers stationed in Normandy in the spring and summer of 1942 who claim that it was common knowledge that the English were going to attack at Dieppe.  In addition, SS reports from the Protektorat Böhmen und Mähren, drawing on the interrogation of Czech citizens rounded up after the assassination of Reinhard Heydrich, also warn of an impending invasion near Dieppe in August 1942.

History is always full of surprises and I hope that you will follow this blog and contribute to it with your own thoughts based on your knowledge of the Dieppe Raid and your comments on the arguments and material that I present over the coming weeks.

Dr David Ian Hall, is a Senior Lecturer in the Defence Studies Department, King’s College London, based at the Joint Services Command and Staff College, Shrivenham, United Kingdom, and Research Associate at the LCMSDS. View a video of his 2011 LCMSDS lecture on the Germans at Dieppe here.