Photography on the Front Lines (Part 3): Soldier-Made Photography of the First World War by Carla-Jean Stokes

In a 1917 Canadian War Records Office report, Sir Max Aitken, Lord Beaverbrook, stated “the events and men may pass, but the photographic plates remain for years as an indelible record …five, or ten, or twenty five years from now, they will be shown to us and our sons, and will link the decades together in a way unimagined by our ancestors.” Beaverbrook clearly believed in the importance of creating a visual document of the Great War. For more than a year, the CWRO employed two official photographers to capture images of the front. Although originally intended for documentary purposes, the official photographs of Captain Harry Knobel and, later, Lieutenant William Ivor Castle, were put on exhibition and sold as prints or albums.[1]

The first exhibition of official Canadian war photographs took place at Grafton Galleries in London on 4 December 1916. There were 200 photographs by William Ivor Castle, Canada’s second Official War Photographer, on display. They were massive prints, enlarged to dimensions of 3×3 feet and up to 6×10 feet. During the six-week run, over 50,000 spectators came to see the exhibition, including King George V and Queen Mary, who viewed it twice. Castle’s exhibition travelled through North America for two years, coming to Toronto in the summer of 1917 for the purposes of drumming up support for the continued war effort.[2] The final exhibition of official Canadian war photographs also took place at Grafton Galleries. This time, on 7 January 1919, William Rider-Rider, the third of three official Canadian photographers, showed his images of the Last Hundred Days. 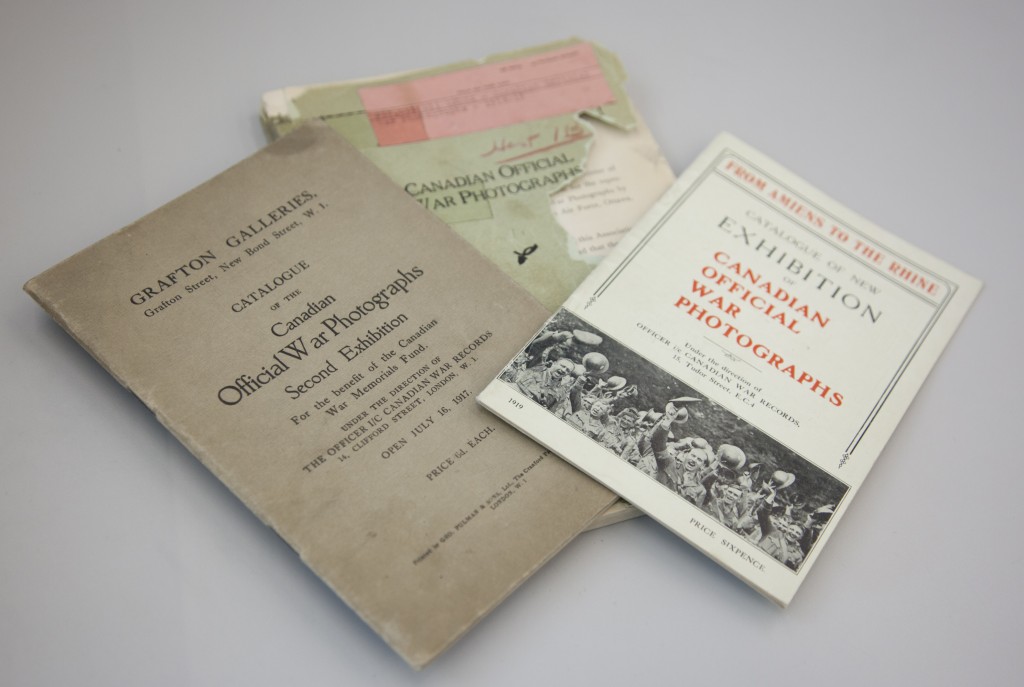 The CWRO put on a number of exhibitions of official war photography, but many soldiers ignored the ban on photography at the front and took their own photographs.

The Canadian Official war photographs – also known as the “O” series – are comprised of approximately 4705 images. The “O” series is accompanied by series’ “S” (sports), “N” (Navy), and “M” (Miscellaneous). However, this large number of official photographs does not make up the entire body of Canadian imagery that was produced during the war. Indeed, although cameras were banned from the front, Laura Brandon, art historian of the Canadian War Museum, reminds us that “the bulk of the images [in the CWM collection] are the work of regular soldiers, nurses, and other military personnel.”[3]

Photographs were obviously as important to the soldiers and nurses of the Great War as they were to Beaverbrook and the CWRO. As Andrew Rodger points out, the First World War was the first major conflict that involved soldiers who also happened to be amateur photographers.[4] The release of the Kodak Brownie in 1900 meant that the average person could purchase an inexpensive, fixed-focus camera and take “snapshots.” When the war began fourteen years later many people had experience taking photographs. After the fighting broke out, Kodak marketed the Vest Pocket model, and encouraged soldiers to begin creating their own record of the war. Sales of this tiny camera, measuring about 2 and ½ by 4 and ¾ inches when closed, exploded between 1914 and 1915.[5]

By early 1915, it was clear that the order not to send photographs home or to the press was not being followed. Military leaders feared photographs that revealed sensitive information could fall into enemy hands. They also worried images that might hinder morale could be sent home. As such, Routine Order No. 189 was enacted on 20 March 1915. This order stated that all cameras must be sent home, and would be inspected to ensure they did not contain film. This order was partially revoked to allow commanding officers to have cameras for documentary purposes, such as taking portraits for regimental histories. However, this allowance was itself revoked on 18 May 1915, and original Order No. 189 stuck. Taking photos was punishable by death.

Despite logistical difficulties and a ban on cameras, soldiers continued to take photographs in abundance. Film could be brought out when a soldier went on leave, but this was not always a common luxury. It was less difficult for officers to take photographs, simply because they had a little more leeway to smuggle film in and out of the Front. However, George Bell, an Englishman who joined the CEF from Windsor, Ont., remembered, “My sister mailed films to me from England, and I sent them back by soldiers to London, where they were developed and printed and the prints mailed to my sister who, in turn, mailed them to me, a roundabout method which worked quite successfully.”[6]

Private Edwin Pye[7], who enlisted in Moose Jaw, Saskatchewan in 1914, seems to have been another such covert photographer. His photograph album contains 57 black and white prints of life at (and behind) the front, images of the destruction at Ypres, and even distant scenes of battle. A number of the photographs in Pye’s album were taken in 1915 – a full year before Canada hired an official photographer. It is unclear whether he took any of the photographs in his album, but he does appear in several of the shots. 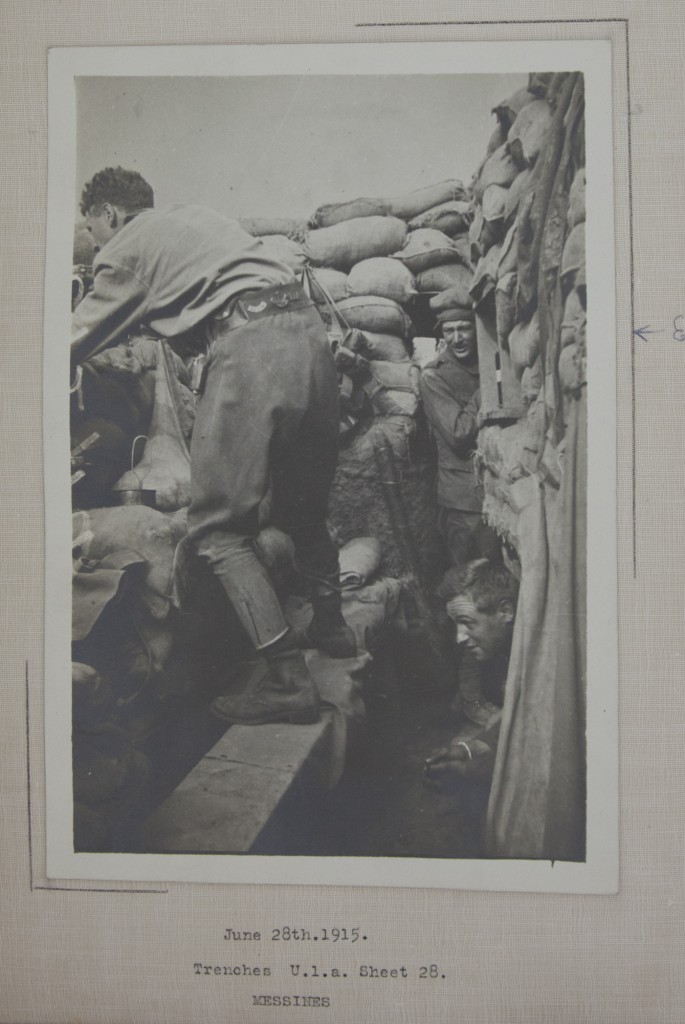 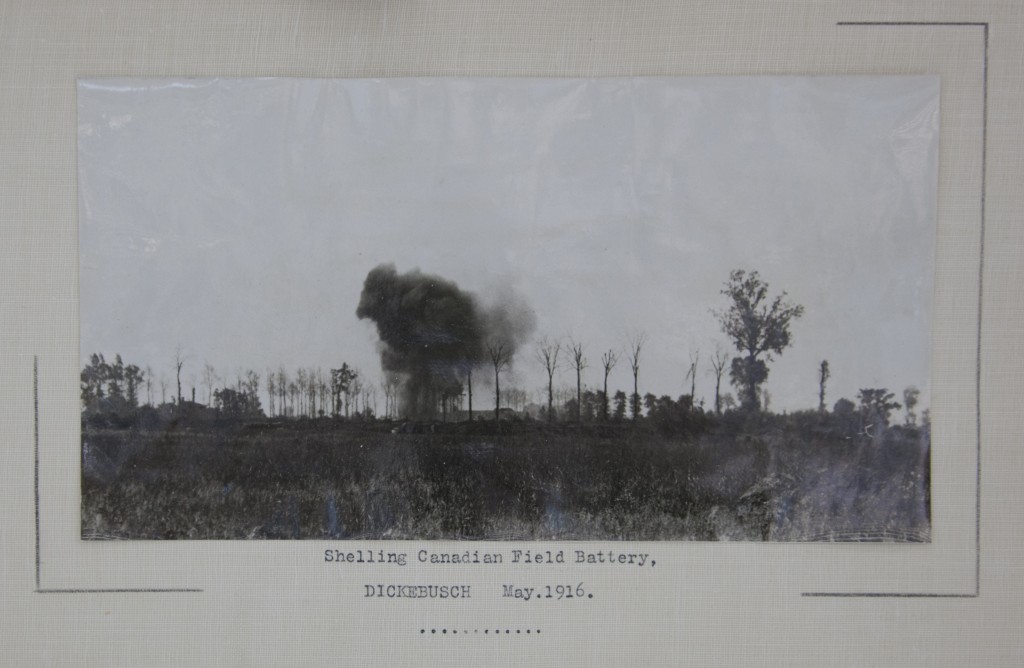 Towards the end of the war the idea of the “war souvenir” grew in popularity amongst both officers and rank and file soldiers.[8] Such objects were advertised in Official War Photography exhibition catalogues and newspapers, just as we would see commemorative coins, stamps or plates today. Pye’s album is particularly interesting for this reason. It is unclear when he compiled it, but there are multiple types of captions, as though he revisited the images and added new insights. Jonathan Vance argues that soldiers in the postwar period often revisited battlefields or held unit reunions, because soldiers remembered the positive aspects of the war: the relationships they forged and the sights they saw. 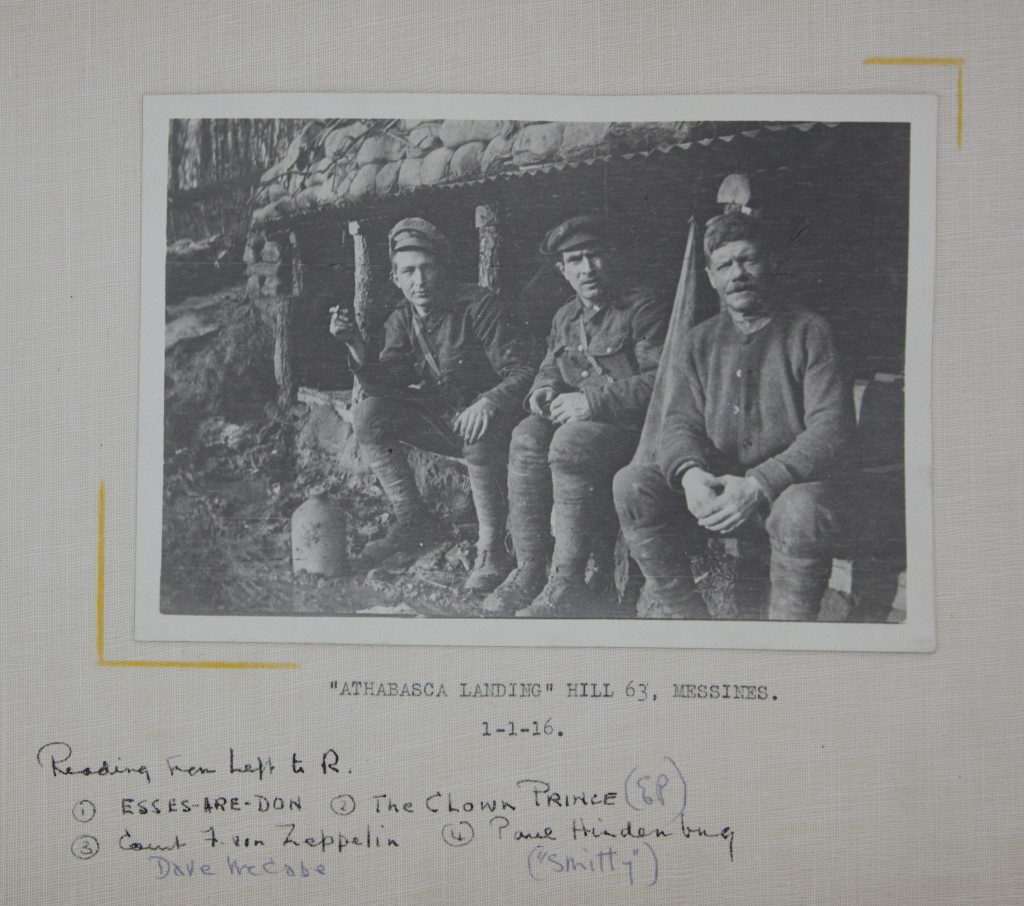 Note the three different annotations on this photograph. This indicates that Pye (who refers to himself as the Clown Prince) revisited his album and added new insights.

Beaverbrook was correct in stating that the official photographs of the CWRO would provide future generations of Canadians with a visual document of war. Viewing the unofficial soldier-made photographs suggests a similar photographic style, and indicates that those who directly experienced the war would use photography as their own form of remembrance.

[1] This is contrary to Jorge Lewinski’s assertion that First World War photographs were hidden from spectators at home until long after the war ended, thus creating less impact. While it is true that a number of photographs were not revealed to the home front, clearly a large number were indeed shown. Currently, Library and Archives Canada houses 3 scrapbooks of newspaper clippings in which these photographs appeared. The third volume was compiled from July 21-October 5 1917, hardly a year after the advent of the CWRO. (Library and Archives MIKAN # 4600761).

[2] A Grafton Galleries exhibition of Canadian Official War Photos has been re-enacted at the National Gallery of Canada, Ottawa this summer, as part of the “Persuasive Power of Photography” exhibition, curated by Ann Thomas.

[3] According to Brandon, of approximately 32,000 First World War photographic objects housed at the Canadian War Museum, only about 6,800 photographic prints are “Official” images. She also states that this collection has not been extensively studied, perhaps because the collections at Library and Archives Canada are more well-known.

[7] The very same Edwin Pye who went on to work as a civilian Historical Researcher for the Canadian Army Historical Section after the war and authored the “Pye Papers.” http://www.archeion.ca/edwin-pye-fonds