Piracy and the Experience of Somali Women by Andrea Hall 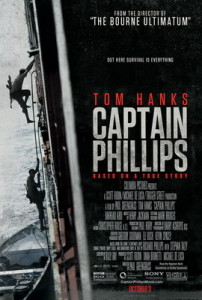 The issue of Somali piracy has become so internationally recognized over the last several years that even Hollywood is taking notice. Captain Phillips, Tom Hanks’ latest film has received critical acclaim for its depiction of the 2009 hijacking of the MV Maersk Alabama. While the action and drama on the high seas may translate well into a feature length film, the broader impact of piracy on Somali women is not widely documented. Media and academic attention has almost entirely focused on the actors directly involved – the pirates, who are virtually all men, and the foreign victims of pirate attacks. How the events on the seas affect the women who remain on land has been largely overlooked.

There is a division of opinion in Somali society over whether the pirates are heroes or criminals. In part the debate stems from the origins of piracy: “The last resource Somalis have is the sea, but foreign trawlers have plundered all our fish. This is what drove us to piracy. We have to engage in piracy in order to survive.” These are the words of Daybed, a pirate leader on the hijacked ship Sirius Star, quoted from Mary Harper’s 2012 book Getting Somalia Wrong (148). Daybed is one of many pirates who justify their plundering as a defensive action rather than something of opportunism or greed.

Depending on the source, illegal fishing has taken anywhere from $94 million to $450 million annually out of Somalia. The United Nations Office on Drugs and Crime estimates that in 2009, one of the most active years for Somali pirates, profits ranged from $50-100 million. Considering the extent of illegal foreign fishing, it’s easy to understand how piracy may have been born and even justified by those who undertake a career in plundering. Years without a government meant no central army or navy to protect the extensive coastline – Africa’s longest stretching over 3,300 kilometres – or those who make their livelihood with modest fishing ventures. It also has meant no Somali force to defend against pirates. 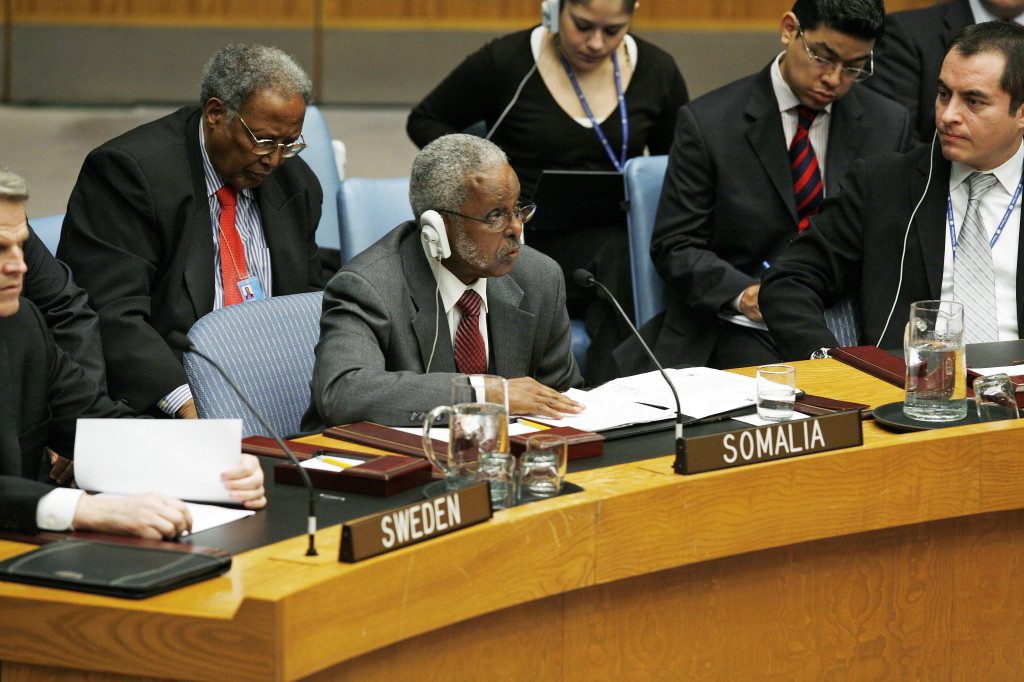 Elmi Ahmed Duale (centre), Permanent Representative of the Somali Republic to the United Nations, addresses a Security Council meeting on his country. The Council considered the Secretary-General’s report providing an updated assessment of the situation with regards to piracy and armed robbery off the Somali coast. (November 2009)

On the other hand, some Somalis see the pirates as criminals who only cause suffering. A 2012 UN Human Development Report on Somalia quotes a resident of the pirate town Haradhere: “We live in a state of fear and violence. The presence of pirates seems to prolong Somali conflict.” Similarly, in a 2009 story from Al Jazeera, a man described as an Islamic leader in the pirate town of Eyl decried piracy, proclaiming, “We hate the pirates but can do nothing about them. They are more powerful than us.”

While many pirates may have started as fisherman who needed to defend their livelihoods, piracy has ultimately emerged as one of the most lucrative, if dangerous, careers for thousands of young, unemployed Somalis, many of whom were left homeless or displaced by constant conflict. The business has brought men from all over Somalia to the coast, looking for work. Unbeknownst to many, it has attracted women too.

For many women who set off in search of income in a pirate town, it means leaving families and making a dangerous journey across the country to the coast. But not all women are able to find the kinds of jobs they were looking for, and even if they do, pirates can be forced to move their base and jobs can disappear. Rather than search for employment then, many women instead seek a pirate.

A 2011 article in The New Republic quotes a young Somali woman who says, “We marry pirates! Otherwise we’d go hungry.” But pirate husbands do not necessarily provide the security the women seek. Pirates often have the option of luring younger wives with the promises of luxury, ultimately abandoning their wives and families for someone new. An article from Somalia Report, a news organization based in Mogadishu, quotes one woman as saying, “For the first few months we had a good time, but then he began to go out with another woman after he got another ransom. Finally I asked for divorce.” On the other hand, not all pirates achieve that kind of financial success. The windfall of cash that comes with one ransom quickly dries up as men who have lived their whole lives with next to nothing spend boundlessly, leaving the pirate and his wife (or wives) once again destitute.

Despite these potential consequences, some women see a pirate husband as their chance to escape poverty. Alternatively, families will offer their daughters as wives to pirates – in a poverty-stricken country like Somalia, marrying off your daughter is often a source of income because dowry payments are traditionally made between families and not individuals. Incidentally, this has made marriage more difficult for poorer men in areas where pirates operate, as families have come to expect higher dowries that may be unattainable for non-pirates.

It is not only the cost of marriage that is on the rise. Pirates bring in substantial amounts of cash to coastal towns, and in some cases, this is the primary source of revenue keeping local economies afloat, but not everyone benefits from the cash flow. The United Nations Office on Drugs and Crime says the sudden influx of wealth creates a false sense of inflation and raises the cost of goods for everyone, including women and their families.

For successful pirates, who are swimming in ransom money, this of course is not a problem. And as scholar Shukria Dini points out, “Young men who gained enormous money, arms and power through piracy are also able to purchase anything that is available in the local market including female flesh.” While there may not be much written on the prevalence of sex workers in Somalia, and particularly in pirate towns, multiple sources mention in passing that prostitution is a main expenditure for many Somali pirates. For instance, one man quoted in the UN Human Development Report says of the $70,000 he made in his one successful ransom attempt, “I squandered the money on alcohol, khat, commercial sex workers and a new car.” In Jay Bahadur’s book The Pirates of Somalia, one vendor of khat, a plant chewed to produce mild hallucinations, concurs saying, “Most pirates spend money on three things: khat, alcohol, and women.”

Khat itself is the cause of controversy in some Somali communities. For the predominantly female vendors, it is at least a source of income. Routinely selling khat to pirates, however, can also be a pathway to sex work. For instance, one woman told Somalia Report that a pirate customer once asked her to strip for him. “He promised me $100 just for a ten minute service. I couldn’t believe it,” she says. The article, originally published in 2011, says she no longer is part of the sex trade but that it was a source of income for some time. The United Nations High Commission on Refugees points out that women who take up sex work during humanitarian emergencies in order to feed themselves or their families are new to the industry, and have a harder time networking with other sex workers and negotiating safe sex.

For many women, the act of piracy and the dangers associated with it can also have a direct impact on their lives. Pirate husbands can get lost at sea, captured and imprisoned, or killed. In other cases, women are married to fishermen who can no longer make a living because piracy has made them the target of attacks – either by the pirates themselves or by foreign vessels that are attempting to track down pirates but cannot tell the difference. They are left without a husband and often without an income to raise families. Furthermore, piracy disrupts the distribution of food aid – obviously it is much more difficult to ship in food aid to ports affected by piracy, and some 95% of aid to Somalia is shipped by sea (the MV Maersk Alabama of the aforementioned Captain Phillips was carrying 5,000 metric tons of aid amongst its cargo). The 70-80% of refugees who are women and children and rely on that can be added to the tally of pirate victims.

Of course on the broadest level, the insecurity caused by a mass of impoverished and often desperate young men with arms creates a dangerous situation for women, and the general population of Somalia and beyond. A recent report from the World Bank, UNODC and INTERPOL says from 2005-2012 hijackings off the coast of Somalia and the Horn of Africa led to as much as $413 million (USD) in ransom payments. It goes on to say that much of that money has then been used to finance criminal activities across the globe, including the funding of militias, as well as arms and human trafficking. 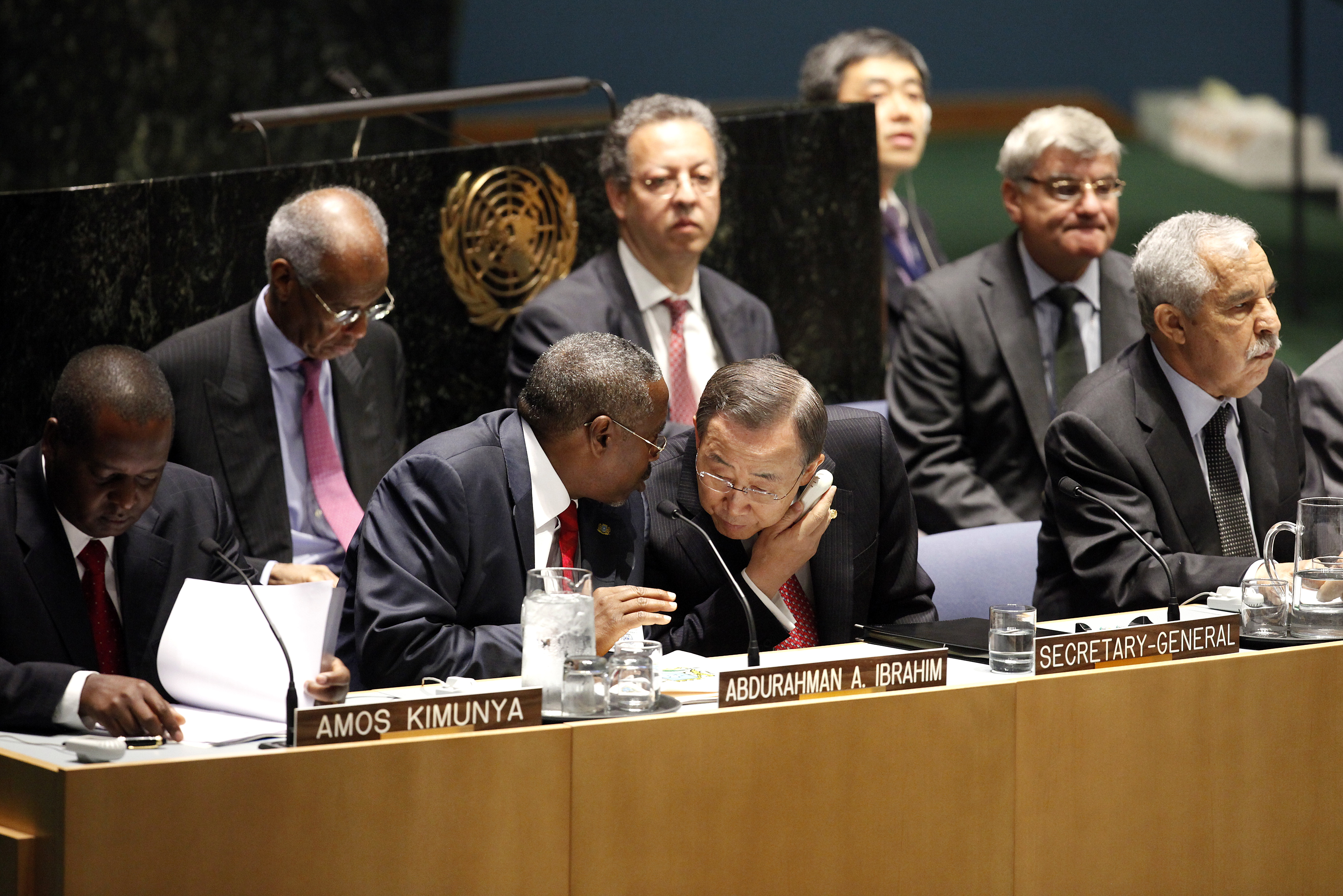 Secretary-General Ban Ki-moon (second from right) speaks with Abdurahman A. Ibrahim, First Deputy Prime Minister and Minister of Fisheries and Marine Resources of the Somali Republic, during a morning session of the General Assembly’s panel discussion on piracy. (May 2010)

Causes of piracy may have started with grievance and shifted to greed, but the roots of the problem, including poverty and conflict, cannot be addressed with a naval response. Moreover, that kind of response does not eradicate the problems that piracy creates for women in Somalia. An October 2013 report from the UN Assistance Mission to Somalia (UNSOM) notes that piracy attacks are declining; 17 attacks took place during the first nine months of 2013, compared with 99 attacks in the same period of 2012. This could, in part, be related to the establishment of a government in Somalia, as elections were held in September of last year. In a section entitled “Addressing the root cause of piracy off the coast of Somalia” the UNSOM report details some of the efforts being made to do exactly that, including strengthening the fishing industry, skills training programs and the promotion of alternate livelihoods for young men. In this push however, the women who have struggled as a result of piracy must not be again overlooked.