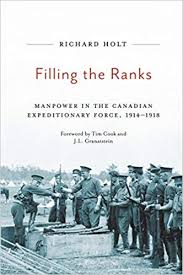 Lieutenant Colonel Richard Holt passed away 14 April 2017 after a battle with ALS and one month after Filling the Ranks was published. After retiring from the Canadian Reserves in 2004, he dedicated the later part of his life to the study of history and to the commemoration of Canada’s fallen soldiers.

In this book based on his 2011 PhD thesis at Western University, Holt studied recruiting in the Canadian Expeditionary Force as a bureaucracy under the old banner of von Ranke’s seemingly apolitical archival approach (p. 4). The result is an institutional history written from the perspective of those behind the desk at the Department of Militia and Defence and the recruiting offices. This is achieved by extensive archival research on both sides of the Atlantic. Any student of Canadian history would be wise to read Filling the Ranks as a reference work alongside A.F. Duguid’s official history appendix.[1] It is important to understand the bureaucracy of recruitment and training and how the management of manpower in Canada evolved in order to contextualise the resulting social problems on the home front. In their foreword to the book, Jack L. Granatstein and Tim Cook highlight how a study like this was long overdue in the Canadian historiography of the Great War (pp. xii-xiii). In Broken Promises, Granatstein had discussed recruitment and conscription with the dominant theme being the 1916 collapse of the voluntary recruitment system under Sam Hughes and later in life, Granatstein grew more sympathetic to the cause of conscription.[2] Holt builds on this basic premise and expands it to include studies of how the recruiting process worked and how, throughout the course of the war, the process became streamlined through experience, trial, and error resulting in the recruitment and equipment of an elite force within the British Army by 1918. This evolution began with militia recruitment, and direct unit-based recruiting, and later compulsory service.

Of particular interest is Holt’s third chapter which discusses the criteria for enlistment including the changes made to the minimum height, a relaxing of strict eyesight criteria, and of other conditions required for acceptance into the Canadian forces. While he was able to make use of recruiting records to determine the numbers of men deemed unfit in 1917 as an example, (pp. 64-65, 82) it is disappointing to find that he could not make use of Nic Clark’s recent compilation of statistical data on the health and mental well-being of rejected volunteers.[3] While the premise is true that health regulations were relaxed to meet the demands for more men, there is a break in the linear development. Canadian soldiers in 1916 were deemed unfit by British doctors and shipped back to Canada, forcing stricter regulations to be reinstated to a limited degree. The result was the decimation of units that had spent 1916 starving for volunteers which did not reflect well on Canada’s ability to effectively recruit.

The issue of recruiting from Central Power states (Germany, Austria-Hungary, Bulgaria and the Ottoman Empire) is a subject that could fill volumes on a unit by unit basis. In general, they were immediately suspect as they could potentially be spies or liable to desert to the enemy but many would serve overseas regardless (p. 70). Because this was handled on a case-by-case basis there was little room for Holt to discuss it fully. Holt leaves this discussion at simply stating that naturalisation was the only requirement for a man born a subject of the enemy to enlist as, according to the Naturalization Act of 1914, new subjects were obligated to fulfill all obligations as a British subject (p. 70). He does, however, lay the groundwork for further studies as he points out that, with the abandonment of recruitment through the militia, the commanding officers of local units took charge of the recruiting process (pp. 112-113). To clarify, these officers would conduct interviews with the enlisted man and require reference letters from previous employers. He could then make recommendations that would allow a man to serve if they met the satisfaction of the Assistant Adjutant General of the military district and, in some cases, the satisfaction of the District Intelligence Officer.

Training was another bureaucratic nightmare in Canada and it is masterfully represented by Holt in his sixth chapter. He accomplishes this by taking a critical reading of the archival evidence. In the case of soldiers’ backgrounds, rather than take the words of soldiers and attestation papers at face value, Holt’s research points out that soldiers and officers were often less than honest about their backgrounds. As an example, discharge papers were rarely required to be produced as evidence of previous service to the recruiting officers. After combing the British National Archives for their discharge papers, Holt found that 17 of 49 men at Valcartier, as one small sample, who claimed to have served in the British Army were falsifying their records (pp. 132-133). Holt also critically assesses the training curriculum in Canada compared to Great Britain. In short, until Canada could establish an effective curriculum, method of evaluation, and procure the necessary equipment, it was only through the training in England that many of the lives of the men of the First Canadian Contingent were saved. As early as 1915, training manuals had become obsolete and incompatible with frontline conditions (p. 135). This would be rectified by the adoption of the British fourteen-week programme, but fourteen weeks was too long as the front line needed to be reinforced as soon as possible (p. 137). These issues were further complicated by the shortcomings of the infamous Ross Rifle. After changing from the Ross Rifle to the British Lee Enfield, there was a significant problem of shortage of weapons for basic training in marksmanship. Some units were only trained in the use of more antiquated models (pp. 163-164). To summarise, Holt argues that training was an integral part of manpower management but, in essence, effective training came at the cost of speed and vice versa.

Conventional wisdom holds that conscription solved the crisis of 1916 when the well of voluntary recruitment had dried up. Canadians had witnessed the carnage of the Western Front and no longer wished to enlist. Holt reiterates Desmond Morton’s argument from When Your Number’s Up that only infantry battalions had this problem and voluntary recruitment in other units never declined (p. 104).[4] This speaks volumes to what Canadians thought of joining suicidal infantry units. Here it is used to demonstrate that Canada had the manpower to fill the quotas of the CEF but, pending medical issues, greater more-centralised pressure was needed for success. In order to make this argument, the use of secondary literature is selective. Works on the divisive nature of conscription for example, while briefly mentioned in the historiographical section of the introduction, are rarely used in the body. Morton’s criticism of conscription found in When Your Number’s Up, as well as articles on French Canadians and conscription, are never cited in the body of the work. Another absent voice is Henri Bourassa’s which effectively silences the dissenting voices of conscription. This selective use of the available literature thus grounds Holt’s discussion of manpower in a strictly bureaucratic insider’s perspective.

Since it is written as a bureaucratic history and it is advisable to read as a reference work, as a piece of historiography Holt’s book leaves much to be desired. While he does list a number of useful works in the introduction, how these works influenced his philosophy of history or thinking about the archival materials is absent. Thus, his survey of the evolution of manpower politics in Canada is not initially grounded in the existing literature, political or social. Still, an insider’s study answering the question of how recruiting worked, let alone evolved, was indeed long overdue and fortunately that is precisely what Holt has accomplished in a well-organised manner that unravels the nightmare of military bureaucracy.

[4] Desmond Morton, When Your Number’s Up: The Canadian Soldier in the First World War (Toronto: The Random House of Canada Ltd., 1993), 60.