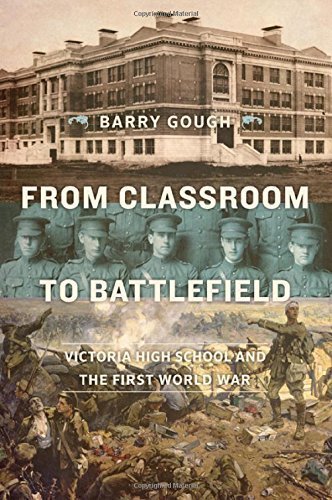 Barry Gough’s From Classroom to Battlefield offers a glimpse into the experiences of students and staff at Victoria High School (VHS) in Victoria, British Columbia during the First World War. As the son of a VHS alumnus and a graduate of the school himself, Gough combines his personal connection to the community and school with his expertise in military history. The end result is an engaging case study of a Canadian high school in wartime that pays tribute to the sacrifices of Victoria’s soldiers and their families during the war.

The book’s layout is logically organised and offers a traditional chronology which covers the outbreak of war and mobilisation (Chapter 1), the fighting at Ypres (Chapter 2), the Somme (Chapter 3), Vimy Ridge and Passchendaele (Chapter 4), and the final Hundred Days at Amiens and Mons (Chapter 5). This is followed by a series of shorter thematic chapters that consider various aspects of memory and commemoration in the postwar years. Chapter 6 examines the Armistice, Chapter 7 outlines casualty figures and the impacts of death and injury on the Victoria community, and Chapter 8 discusses the construction of local and national memorials. Throughout each chapter, Gough expertly weaves together narratives about individual students and staff with wider wartime contexts. Additionally, Gough regularly shifts his focus to consider the participation of the VHS community in theatres of war beyond the Western Front. He also incorporates details on those who served in the navy and air force to complement his discussion of the army. By highlighting the far reaches of VHS during the war, Gough supports his argument that the school made significant contributions to the Canadian war effort.

As the chapters unfold, the changes Victoria experienced during the war are revealed through Gough’s attention to a few major themes. The negotiation between supporting the Empire and emerging notions of Canadian national identity is a recurring theme that is always considered in relation to Gough’s characterisation of Victoria as “the most British of all Canadian cities” (p. 14). Hometown pride and family sacrifice are also prominent themes in discussions of all stages of the war and postwar commemorative efforts, and rightfully so for a study of wartime experiences at the local level. By analysing these themes, Gough situates VHS and the city of Victoria within wider discussions of war and its impact on Canadian communities.

This study relies on a variety of local sources that help piece together the experiences of high school students and staff within the Victoria community. The VHS archives proved a valuable source for documents, photographs, and material culture, as well as a collection of the student magazine, the Camosun. Gough’s extensive reference to the Camosun is one of the greatest contributions that he makes to existing scholarship as he provides opportunities for the reader to hear from VHS students in their own words. Student magazines and yearbooks are an ephemeral source that are difficult to come by for the First World War so the inclusion of this source, in addition to local Victoria newspapers, offers important insight into the lives of Canadian youth during the war. However, Gough would have benefited from consulting secondary scholarship that raises questions about the benefits and limitations of student magazines and yearbooks in order to better inform his methodological approach. For instance, in The Dominion of Youth, Cynthia Comacchio points out that high school yearbooks are a valuable source that reveal adolescent views and “uncover the normative culture,” but that they are also strongly influenced by “official institutional culture” and may not reflect a diverse student body.[1]

Gough also draws from military records, including personnel records and war diaries, to trace individual stories of students and staff from their prewar experiences through to their deaths or postwar lives. The most poignant stories are those in which family relations are emphasised, such as Jessie Nelson King, a Nursing Sister who was able to visit her brother’s grave in Belgium before dying from meningitis shortly after the war’s end; and Blayney Scott, a pilot who succumbed to his injuries following a plane crash and died before reuniting with his brothers who survived the war. Each of these stories, which appear in different chapters of the book, contributes to Gough’s argument and demonstrate the war’s impact on families in Victoria.

It is clear that Gough’s selection and analysis of these sources was informed by his interest in examining “the faces in the crowd” rather than government and military operations which “have received so much attention” (p. 12). While this approach contributes to our understanding of the individual’s experience of war in Victoria, there is no discussion of minorities or Indigenous peoples in the area. Rather, the individuals whose stories are recounted are largely white Anglo-Canadians from prominent middle- and upper-class families. His focus reflects the demographics of VHS students and staff, but Gough does not acknowledge that VHS represents a small portion of Victoria’s population—and of Canadian society as a whole—during the First World War. Instead, Gough speculates that Victoria “epitomizes what we might well find in any other older community in Canada” (p. 18). On the contrary, the picture that emerges from Gough’s study is that VHS was quite unique due to the “homogeneous” population of Victoria and—to use Gough’s term—the “super-high-school status” the school achieved as a result of its connection to Victoria College (pp. 11, 34).

Another aspect of the book that could have been strengthened is the discussion of the intersections between the home front and front lines. The book examines some interesting subjects that are often overlooked in the scholarship of the First World War, particularly those related to adolescents and their contributions to the war effort. However, the snapshots of home front activities provided by Gough should have been discussed in more detail. For example, one of the photographs included in the first insert depicts three female students working in a VHS victory garden, but Gough offers no further information on this important wartime activity. There were other missed opportunities, such as references to school fundraisers, donations of goods, salvaging campaigns, and rationing, which could have uncovered more about the flow of materials—and not just people—from the classroom to the battlefield. Furthermore, a greater consideration of these topics would have revealed more about the impact of war on the school itself. Gough hints at a rise in school spirit during the war but does not pursue this idea further other than a brief mention of the expanding VHS Portia Society debating club (p. 72). As a result of Gough’s preoccupation with soldiers and the battlefield, women and students on the home front are rarely featured throughout his work, and, therefore, the impact of the war on VHS and Victoria is not fully explored.

Gough’s case study of VHS during the First World War is a welcome addition to a scholarship that has increasingly examined the impacts of war at the community level, and on Canadian youth in particular. In an article Gough wrote for Canadian Military History following the publication of his book, he acknowledges the contributions his study makes to the historiography of Canada and the First World War and offers commentary on his approach. He explains that there was no Canadian model to follow so he was “treading new ground writing a high school history.”[2] While this may be true in the context of the First World War, Gough did not engage with existing literature on youth studies or student contributions to the Second World War.[3] This has resulted in a lack of generational consideration, for Gough selected the individuals in his study based on their connection to VHS, whether or not they were recently students of the school. Nevertheless, Gough provides a foundation for others to pursue research on high school contributions to war while adopting age as a category of analysis.

From Classroom to Battlefield is recommended to those with a connection to VHS or Victoria, students and educators, as well as a general audience of Canadians who take interest in this period of history. Gough has produced a work in which his passion for sharing the stories of those who walked the halls of VHS before him is evident from beginning to end.

[3] See, for example, Christine Hamelin, “A Sense of Purpose: Ottawa Students and the Second World War,” Canadian Military History 6, no. 1 (1997): 34-41; Anne Millar and Jeff Keshen, “Rallying Young Canada to the Cause: Anglophone Schoolchildren in Montreal and Toronto during the Two World Wars,” History of Intellectual Culture 9, no. 1 (2010-11): 1-16; Frances Helyar, “‘Gladly given for the cause’: New Brunswick Teacher and Student Support for the War Effort, 1914-1918,” Journal of New Brunswick Studies 1, no. 3 (2012): 75-92; Cynthia Comacchio, “‘To Hold on High the Torch of Liberty’: Canadian Youth and the Second World War,” in Canada and the Second World War: Essays in Honour of Terry Copp, J.T. Copp, Geoffrey Hayes, Michael Bechtold, and Matt Symes, eds. (Waterloo, Ontario: Wilfrid Laurier University Press, 2012), 33-66; and Kristine Alexander, “An Honour and a Burden: Canadian Girls and the Great War,” in A Sisterhood of Suffering and Service: Women and Girls of Canada and Newfoundland during the First World War, Sarah Glassford and Amy J. Shaw, eds. (Vancouver: University of British Columbia Press, 2012), 173-194.