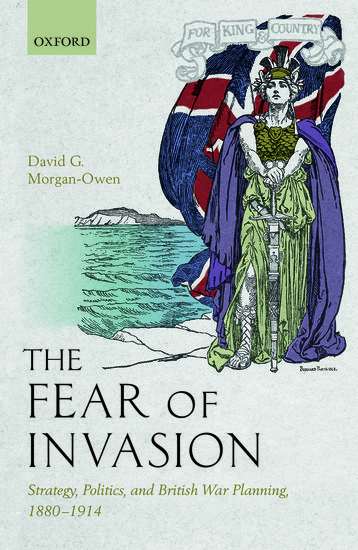 The past decade has seen a surge in the study of the British Empire’s grand strategy and war planning before the First World War. Indeed, historian Matthew Seligmann has gone so far as to identify the past decade as “The Renaissance of Pre-First World War Naval History.”[1] David Morgan-Owen’s new monograph, The Fear of Invasion, is an excellent addition to this trend. He tackles a formidable objective: proving that the threat of attack on the British Isles had a significant influence on the formation of the British Empire’s pre-First World War defence policy. To the layperson, this may seem a simple goal but in doing so, Morgan-Owen is refuting over sixty years of established historiography. Despite this daunting goal, Morgan-Owen’s argument and use of evidence will sway both newcomers to defence studies as well as experienced academics.

For over sixty years, the historiography of the United Kingdom before the First World War has consistently regarded the prospect of the British Isles being invaded, and the invasion scares of the pre-1914 period, as nothing more than a ‘bogey.’[2] Many works treat the invasion issue, particularly the deliberations of the Committee of Imperial Defence, as purely political; the machination of Army officers seeking higher budgets, jingoistic conscriptionists, or even naval officers who sought to bend the British Army to their will.[3] Morgan-Owen identifies this gap within the historiography, arguing that, while political intrigue was an influence, this interpretation unjustly brands home defence as having a negligible impact on pre-war British strategy. The historiography of British war planning has been overwhelmingly concerned with the formation of naval and military offensive war plans against Germany. Morgan-Owen argues that this has “created a false dichotomy between ‘Continental’ and ‘blue water’ schools,” in which the pre-war period was defined by cutthroat competition for funding and operational prestige between the British Army and Royal Navy (p. 4).

Distancing itself from these themes, The Fear of Invasion’scentral objective is detailing the strategic dilemmas facing the British Empire before the First World War. Buttressed by extensive archival research, Morgan-Owen argues that the United Kingdom’s pre-war strategic thinking was primarily defensive. The goal of British leaders was maintenance of the Empire and of the European status quo. In turn, Morgan-Owen believes this bred an “unwillingness to discuss offensive issues” (p. 232). The blame for this, he argues, lies with the pre-war political leadership who above all desired European peace, and if not that, hoped “sea power, financial strength, and geographical isolation would insulate Britain from the most immediate effects of a European conflict” (p. 6). Rather than coordinating the armed services into an effective war machine, the politicians reinforced the ‘Continental Commitment’ of sending the British Expeditionary Force to the aid of France. This decision was one of political expediency rather than military practicality because, as Morgan-Owen argues, “beyond the diplomatic imperative to support France, the government had no concrete conception of how to fight a war against Germany” (p. 226).

The bulk of the book, and its strongest sections, concerns the growing strategic predicament faced by the Royal Navy in its war planning against Germany. Faced with an increasingly strategically divergent and reticent British Army, the bulk of defensive duties were thrust upon the Royal Navy. The story of the gradual withdrawal of the Royal Navy-planned blockade of Germany in the face of submarines, nautical mines and torpedo craft has frequently been told before, but Morgan-Owen provides the most radical account yet. Not only were offensive naval operations sidelined by the establishment of ‘far blockade,’ but as early as 1906, under the leadership of dogmatic First Sea Lord Jackie Fisher, the fear of German attack on the British Isles, either purely naval or amphibious, began to dominate Royal Navy thinking. Drawing upon an impressive quantity of Admiralty memorandum, Morgan-Owen illustrates that the reforms in fleet disposition and coastal patrol all geared towards combating a German coup de main against Great Britain’s east coast. In doing so, Morgan-Owen refutes naval historian Andrew Lambert’s revisionist theories on Royal Navy ‘flotilla defence’ and strategic economic warfare.[4] Moreover, Morgan-Owen contends that the Admiralty recognised its impotence, and it became the primary proponent for readdressing the divergence in naval and military planning, although it ultimately failed in bringing about change before August 1914. Thus, the United Kingdom entered the First World War with only a set of general principles on defending the Empire.

The conclusion of The Fear of Invasion is reminiscent of David Lloyd George’s famous quote chronicling the beginning of the First World War: “The nations backed their machines over the precipice… not one of them wanted war; certainly not on this scale.”[5] David Morgan-Owen gives credence to Lloyd George’s claim about British apprehension towards war, but also illustrates that, despite its obligations, the British Empire did not have an effective war machine in August 1914. The Fear of Invasion is an important work on a subject that needed a modern revision. While other historians have been satisfied with squabbling over the minor minutiae of British military and naval thinking before the First World War, David Morgan-Owen offers an innovative and tactful account on the role of home defence in shaping British strategy.

← Book Review: “Backs to the Wall: The Battle of SainteFoy and the Conquest of Canada” by D. Peter MacLeod Book Review: “From Classroom to Battlefield: Victoria High School and the First World War” by Barry Gough →