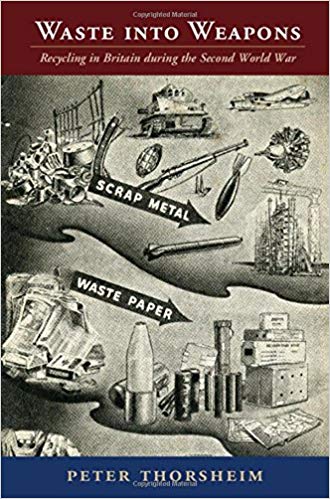 The Second World War killed millions of people over six years and laid waste to large areas of the world in unprecedented scale and fury. The titanic battles fought over land, sea, and air by large and technologically sophisticated militaries necessitated the mobilisation of entire populations, the consumption of natural resources, and the expansion of government power to sustain. Delving into these important themes, scholars such as David Edgerton and Lizzie Collingham have shown how logistics, technology, and natural resources shaped the war’s course and character, while Peter Thorsheim’s recent book, Waste into Weapons: Recycling in Britain during the Second World War, makes another innovative contribution to this historiography.[1] Waste into Weapons recounts how the British government mobilised a nation-wide recycling and resource conservation programme designed to support the nation’s war effort. Thorsheim offers engaging and timely insight into a range of topics, from how recycling helped and hindered war production and civilian morale, to its impact on Anglo-American relations and the destruction of cultural artifacts and property. Waste into Weapons is a very good book that will appeal to scholars and general audiences interested in military history, environmental history, waste management, material culture, and heritage conservation.

The book is divided into ten chapters and three sections. In the first section, Thorsheim explores the history of recycling in Britain, the origins of the government’s wartime recycling programme, and the challenges involved in achieving its objectives. The section opens with a chapter covering important background material on salvage up to 1939. In the wake of the industrial revolution and mass production, Britons generated more trash than their ancestors thereby forcing local and national governments to assume more control over refuse disposal, particularly in urban areas like London and Manchester. By the early twentieth century the overriding priority was to remove garbage from cities so it could be burned or buried to protect public health and sanitation. However, the outbreak of war in 1939 forced many Britons to temporarily abandon the idea that their waste was both harmful and valueless. In the midst of a deteriorating strategic position and the exodus from Dunkirk’s beaches, the Ministry of Supply established a Salvage Department under the leadership of two important figures, Harold Judd and J.C. Dawes, who remained with the Department and its various wartime and postwar incarnations for approximately ten years each.

During Britain’s darkest hours, waste became an essential source of supply. From 1940 onwards, Judd and Dawes coordinated reclamation programmes designed to attenuate shortages in raw materials, such as wood pulp, aluminum, and iron. In an effort to expand recycling, the British government relied on propaganda about resource conservation and voluntary contributions from civilian organisations, such as the Women’s Voluntary Services and the Boy Scouts. Salvage campaigns harnessed voluntary action and encouraged donations, while government propaganda enticed citizens to part with items that they might have otherwise retained in ordinary times. Thorsheim convincingly argues that the state weaponised household objects by redefining regimes of value and utility. Within this wartime context, aluminum pans and cast iron railings were most valuable if they were turned into Spitfires or some other weapon system (instead of fulfilling their typical household uses). In doing so, Thorsheim states that many boundaries were dissolved “between public and private life, paid and unpaid labor, soldiers and civilians, munitions and everyday objects, and home and battlefield” (p. 7). Of course, not everyone was happy about the situation. Voluntary contributions and donations brought public enterprise into conflict with the waste industry and private companies, as government-sponsored scrap drives cut into profits, sopped up resources, and resulted in duplication and inefficiencies that prompted some cynicism about the importance of recycling.

The book’s second section explores wartime recycling within the war’s expanding international and strategic contexts. According to Thorsheim, British salvage campaigns were viewed by American officials as a litmus test for continuing Lend-Lease aid. Before the Japanese attack on Pearl Harbor, Avril Harriman (President Roosevelt’s Special Representative for Lend-Lease aid in London) used recycling programmes as proof of British resolve in the fight against Nazi Germany and justification for continuing aid at a time when the war was going very badly for the British Empire. Once the United States entered the war, however, Britain’s supply situation changed as American rearmament programmes kicked into high gear. British factories lost access to key resources. The supply of scrap metals (an important ingredient in forging new steel) dried up quickly and added further incentive to increase the scale of reclamation. In the book’s third and final section Thorsheim invites readers to consider the consequences of wartime recycling by examining a cross-section of objects and artifacts in light of the overriding political, economic, and cultural contexts. By salvaging the built environment, the British government turned the damage and destruction wrought by the Battle of Britain and its aerial bombing campaigns into something useful. The recovery and repurposing of “Blitz scrap” (the remnants of bombed-out buildings or destroyed infrastructure not worth the costs of reconstruction) yielded crushed stone, wood, and other building materials used in the construction of airfields by the Royal Air Force.

The removal of iron railings from public places and private homes is another case study, but one with some dubious benefits. As a propaganda tool, removing railings from parks, homes, and even the Soviet embassy was an especially powerful statement of resolve. However, the total tonnage recovered versus the costs of salvage (and repairs to the surrounding landscapes) left many wondering why Lord Beaverbrook’s Ministry of Supply pushed so hard to requisition railings. A similar situation played out with tin cans. To neglect collecting tin cans would have undermined the government’s messaging about recycling and resource conservation. Tins cans were a ubiquitous household item and an obvious source of scrap metal. In the end, though, the cans were too expensive to clean and shred, which meant that they sat unused in dumps and became a symbol of government largess and inefficiency. Waste paper serves as another case study. Paper was an essential input for manufacturing ammunition and other types of weapon systems so there was a special urgency surrounding the reclamation of waste paper. People donated all manner of paper products and in doing so precipitated a major purge of Britain’s cultural heritage. Records from hospitals and local organisations, commissions, personal letters, family records, court documents, and countless other valuable historical sources were sent to the shredders. Books were the most plentiful source of waste paper and consequently library stacks across Britain were thinned out at a feverish pace. As Thorsheim notes, “in 1943 alone, Britons donated 600 million books for recycling – thirty times as many volumes as the Luftwaffe destroyed during its most intensive year of raids against Britain” (p. 184).

If there is one issue with the book it is the periodisation. The narrative and supporting archival materials are significantly skewed towards the early war years and mobilisation. Certainly, this is not a significant fault—the 1940-1942 period is a critical juncture of the war and worth the space devoted to it—but the book missed an opportunity to explore the later war years and demobilisation. When hostilities came to an end, the weapons of war were turned back into waste, as recycling programmes were used to support disarmament, demobilisation, and munitions disposal. Thorsheim touches briefly on the subject when addressing German scrap, but it is worth noting that British armaments and materiel were rapidly turned into waste once victory rendered them surplus to requirements. Indeed, the postwar militaries of almost every Allied country were cannibalised, to varying extents, within a global network of “boneyards” and supply depots. This was done so that armies could weed out obsolete kit and maintain operational requirements at a high level, but it also created a large source of spare parts, technologies, and raw materials that aided in postwar reconstruction and rehabilitation.[2] How the British government and armed forces employed recycling to demobilise and demilitarise after the war remains an unexplored topic of some significance. However, one scholar’s complaint about a missed opportunity should not detract from this otherwise fantastic and innovative study on wartime recycling in Britain.

← Book Review: Filling the Ranks by Richard Holt Book Review: Empire of Guns: The Violent Making of the Industrial Revolution by Priya Satia →