1812: A Guide to the War and its Legacy by Terry Copp, Matt Symes, Caitlin McWilliams et al. 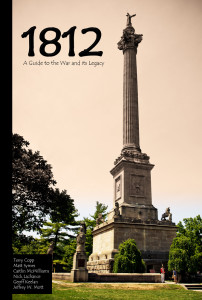 In Canada, the War of 1812 has taken on various meanings. In the immediate aftermath, alongside the “Loyalist” narrative of fleeing from the defeat of the British at the hands of American rebels, the War of 1812 provided a sort of redemption for those still loyal to British North America. From the American perspective, the War of 1812 is merely one in a host of small scale wars in North America and the events of 1812—1815 are mostly forgotten in the collective memory of the United States.

The authors of 1812: A Guide to the War and its Legacy believe that the War of 1812 was an important event in North American history with lasting consequences for Canadians, Americans, and the First Nations. This is the latest guidebook published by the Laurier Centre for Military Strategic and Disarmament Studies that uses modern satellite images, archival records, paintings, and contemporary photographs to offer enough information to allow for a basic understanding of what happened and why it happened that way.

1812: A Guide to the War and its Legacy is organized into two parts. First, an historical section that seeks to place events in their strategic, operational, and human context. Second, there is a tour section that is designed to introduce and guide readers to key locations of war and memory, and offer an explanation of the fluid memory that has evolved over the last 200 years. The War of 1812 has been forgotten, re-imagined, and invented anew many times and the itineraries of the guide illustrate that ever-changing process of commemoration.

Terry Copp is Professor Emeritus of History at Wilfrid Laurier University and Assistant Director of the Laurier Centre for Military, Strategic and Disarmament Studies (LCMSDS). Copp is an influential advocate for military history in both military and civilian post-secondary education. His volumes, Battle Exhaustion (1990), The Brigade (1992), Fields of Fire (2003) and Cinderella Army (2006), have led to a reinterpretation of Canadians in the Second World War. Copp’s interest in the battlefields of Europe led to the creation of memorials and study tours for teacher and students, and the publication of invaluable battlefield guides to Canadian participation in both world wars. He is also the founder of Canadian Military History, Canada’s leading journal of military history. Copp conceived of the project, wrote the history section and sketched out the tour sections of the guide.

Matt Symes is a former Publications Manager for LCMSDS, editor of canadianmilitaryhistory.ca and a current PhD Candidate (ABD) at Wilfrid Laurier University. 1812: A Guide to the War and its Legacy is the fifth battlefield guide that Symes has worked on, including Canadian Battlefields 1915—1918: A Visitor’s Guide and three battlefield guides on the Italian Campaign during the Second World War. Symes was also the co-editor (with Geoffrey Hayes and Mike Bechthold) of Canada and the Second World War: Essays in Honour of Terry Copp.

Caitlin McWilliams is an MA (History) graduate from Wilfrid Laurier University and a Research Associate at LCMSDS. Drawing on her educational and battlefield touring experience as well as her photography talent, McWilliams scouted, wrote, edited and/or added photographs to parts of every tour section in the guide.

Nick Lachance is a former student of Wilfrid Laurier University and Research Assistant at LCMSDS. Many of his photos appear in this guide. Lachance’s primary responsibility was to use modern satellite images from Google Earth and rework them into the 59 historical and tour maps inside the guide.

Geoff Keelan is a PhD Candidate (ABD) at the University of Waterloo and a former Research Associate at LCMSDS. As a veteran of many European battlefield tours, he and Nick Lachance traveled to many of the locations in the tour section. He used that experience to write several of the tour sections.

Jeffrey W. Mott is an MA (History) graduate from the University of New Brunswick. He has worked extensively on the War of 1812 for the Gregg Centre at UNB and for the St. John River Society. Mott was responsible for adding the historical context of the war in what is now New Brunswick and Nova Scotia, in addition to writing the touring sections for the two provinces.