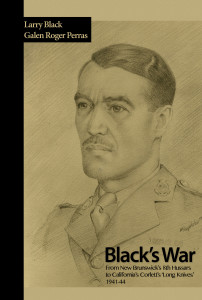 “Lt. Col. J. Laurence (Laurie) Black (1900-1992) graduated from RMC in 1921 and began his career as a reserve officer with the 8th Hussars (NB). He went active and overseas as second-in-command of the regiment in 1941. As a result of a family tragedy, he took what he thought was a temporary transfer back to Canada in 1942. These diaries and letters document his experiences battling military bureaucracy while serving the Canadian armed forces variously as training officer, intelligence officer, liaison with US forces, and even as adviser for wartime propaganda movies. His on-site analyses of Operation Greenlight (Kiska), the US management of the Attu invasion, and Canada’s western coastal defences, are insightful. His comments on the behaviour and training of Canadian and US troops, British attitudes, Japanese forces, conscription in Canada, and other issues, provide a glimpse into the war effort from a rarely seen perspective.”

J. Laurence (Larry) Black, Professor Emeritus and Distinguished Research Professor (Carleton), has degrees from Mount Allison, Boston University and McGill, and has written, edited, or co-edited over 30 books on Russian and Soviet history, and Canadian-Soviet relations. He has taught at Laurentian University (1967-76), and Carleton University (1976-2004). At Carleton he was a member of the History Department, director of the Institute for Soviet and East European Studies, and founding director of the Centre for Research on Canadian-Russian Relations (CRCR). He has served as a researcher for NATO and has prepared briefs for several federal government departments and CSIS. He is the editor of the Russia & Eurasia Documents Annual series published since 1987 in Florida and, in retirement, a sessional lecturer for Laurentian University at Georgian College, Barrie, and is still director of the CRCR, now also located at Georgian.

Galen Roger Perras is an Associate Professor of History at the University of Ottawa. He holds an MA in War Studies from the Royal Military College of Canada and a PhD in History from the University of Waterloo. Specializing in Canadian-American relations and North American military history, he has more than 40 academic publications located in academic journals and edited monographs. His major publications include: Franklin Roosevelt and the Origins of the Canadian-American Security Alliance, 1933- 1945: Necessary But Not Necessary Enough (Praeger 1998); and Stepping Stones to Nowhere: The Aleutian Islands, Alaska, and American Military Strategy, 1867-1945 (University of British Columbia Press & Naval Institute Press, 2003). The University of Ottawa selected him as an Educator of the Year in 2008-09.