Canada in Africa: Addressing Insecurity in Somalia and the Horn of Africa – Edited by Kirk W. Goodlet, Alistair Edgar and Roger Sarty 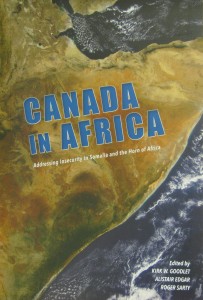 Insecurity and conflict are not unique to Africa; however, with ongoing violence in the Democratic Republic of Congo, a civil war in South Sudan complete with renewed atrocities against innocent civilian populations, murders and mass abductions of school children in Nigeria, new and expanding threats of maritime piracy in the gulf of Guinea, and descent into brutal violence in Central African Republic – with warning being issued by the United Nations of a potential for genocide – Africa certainly has more than its share of violent circumstances facing those who seek to improve the lot of its long-suffering peoples.

This volume features papers delivered at the workshop Insecurity in the Horn of Africa: Challenges, Threats, and Canadian Interests jointly hosted by LCMSDS and ACUNS in 2012. It begins with a look at Canada’s history of engagement in Africa, and broader discussion on humanitarian intervention. The three central chapters examining Somalia offer guarded, but nonetheless constructive, analyses of development in peace building in Somalia. The third and final section of the volume gives some thoughts on how this region, and this subject, has been examined and taught in Canadian classrooms, by scholars attempting to engage their students – younger and older, civilian and military – and build greater critical awareness of the governance challenges that exist, for local and national authorities, external actors, and of course, the populations who are working to build their futures there.