Germany’s Western Front: Translations from the German Official History of the Great War, 1915 – Edited by Mark Osborne Humphries and John Maker with a forward by Hew Strachan 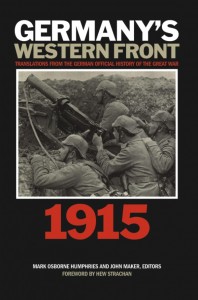 This multi-volume series in seven parts is the first English-language translation of Der Weltkrieg, the German official history of the First World War. Originally produced between 1925 and 1944 using classified archival records that were destroyed in the aftermath of the Second World War, Der Weltkrieg is the untold story of Germany’s experience on the Western front, in the words of its official historians, making it vital to the study of the war and official memory in Weimar and Nazi Germany. Although exciting new sources have recently been uncovered in former Soviet archives, this work remains the basis of future scholarship. It is essential reading for any scholar, graduate student, or enthusiast of the Great War.

This volume focuses on 1915, the first year of trench warfare. For the first time in the history of warfare, poison gas was used against French and Canadian troops at Ypres. Meanwhile, conflict raged in the German High Command over the political and military direction of the war. The year 1915 also set the stage for the bloodbath at Verdun and sealed the fate of the German Supreme Commander, Erich von Falkenhayn. This is the official version of that story.

“For over ninety years, the German forces in the Great War have been obscured on the other side of a historical No Man’s Land. But now, in this monumentally important work, expertly translated and edited, English-speaking military historians will better understand those forces against which the British, Canadian, and other allied armies fought and died in the trenches on the Western Front. Germany’s Western Front, and the volumes that will follow, will be required reading for historians of the Great War.” – Tim Cook, Canadian War Museum