Growing Up and Going to War 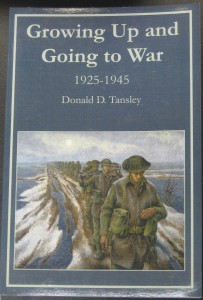 Out of stock; out of print

After the war, Donald Tansley attended the University of Saskatchewan where he earned degrees in Arts and Commerce. Over the next 35 years, he served as a senior public servant in Saskatchewan, New Brunswick and the Government of Canada. Highlights included his work as Charmain of the Commission which implemented Medicare in Saskatchewan and his contribution, as Deputy Minister of Finance, to the revolutionary program of reform in New Brunswick. His federal appointments included Executive Vice-President of C.I.D.A., Administrator under the Anti-Inflation Act and the first Deputy Minister of Fisheries and Oceans. From 1972-1975 he was on leave of absence to the International Red Cross, charged with producing a report on their future role in the world, an assignment which involved visits to some 45 countries.

In 1999 Donald Tansley was awarded the highest honours possible by both the Canadian and International Red Cross. In that same year, he became a member of the Order of Canada.