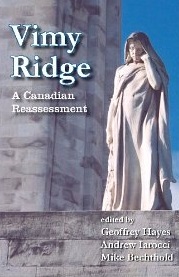 On the morning of April 9, 1917, troops of the Canadian Corps under General Julian Byng attacked the formidable German defences of Vimy Ridge. Since then, generations of Canadians have shared a deep emotional attachment to the battle, inspired partly by the spectacular memorial on the battlefield. Although the event is considered central in Canadian military history, most people know very little about what happened during that memorable Easter in northern France.

Vimy Ridge: A Canadian Reassessment draws on the work of a new generation of scholars who explore the battle from three perspectives. The first assesses the Canadian Corps within the wider context of the Western Front in 1917. The second explores Canadian leadership, training, and preparations and details the story of each of the four Canadian divisions. The final section concentrates on the commemoration of Vimy Ridge, both for contemporaries and later generations of Canadians.

This long-overdue collection, based on original research, replaces mythology with new perspectives, new details, and a new understanding of the men who fought and died for the remarkable achievement that was the Battle of Vimy Ridge.