I was glad to receive a call from the Canadian Battlefields Foundation last summer, asking if I would be interested in leading the May-June 2013 tour to France. Although I had been on various battlefield tours over the years, first as a participant (CBF 1998), and later as a guide, it had been seven years since my last trip; it was time to get back into the game. As tour leader, I was soon joined by Dr. Graham Broad, of King’s College at Western University. His wife Amanda Green volunteered to come along as the second driver for our two vans. 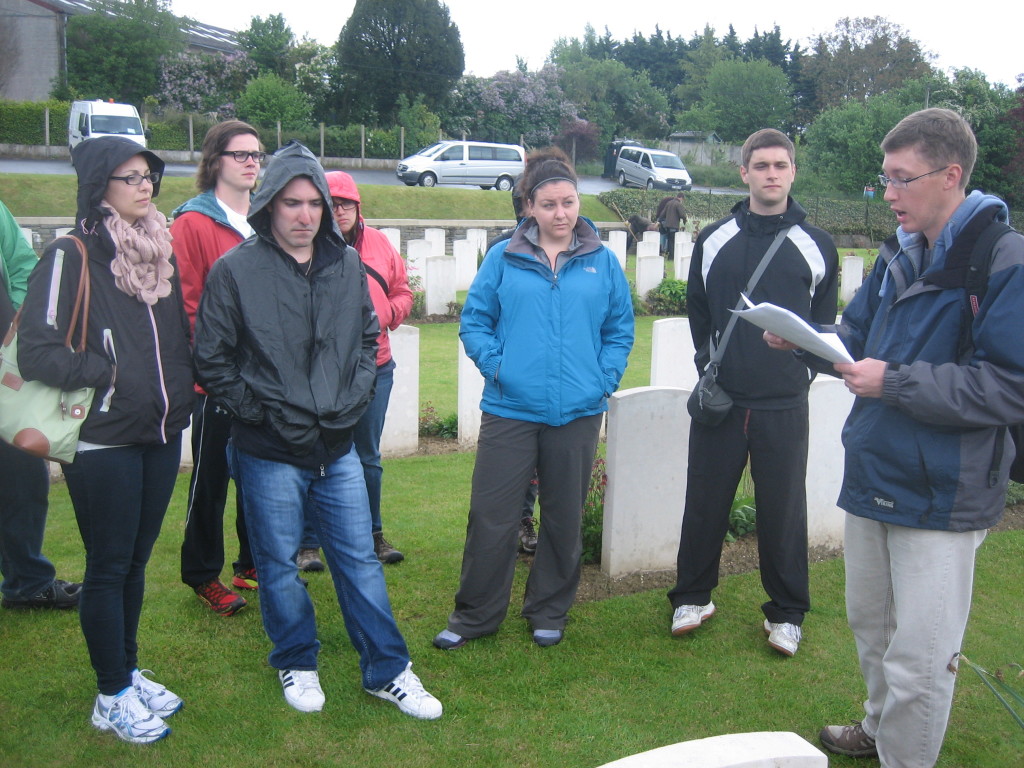 The first task was to find twelve suitable students to participate in the tour. Fortunately, women and men from all parts of the country answered our call for applicants in early January of this year. The applications that poured in were excellent across the board. It was a challenge to work the list down to twelve names, and we did our best with the information that was available. But as with any selection process based on paper applications, there was a degree of uncertainty. Would the group have the right chemistry? Could we all live and work together for two weeks in a foreign land? Time would tell.

After touching down in France, and jumping through the usual hoops to collect our two nine-passenger vans, we lost no time in hitting the road, bound for Péronne, where we started the tour with a visit to the Historial de la Grande Guerre, one of the world’s finest First World War museums. Naturally, the first day on the ground after a night-flight over the North Atlantic can be a long one, and the group was pretty tired by the end of the museum visit. It was too soon to tell how everything would come together. 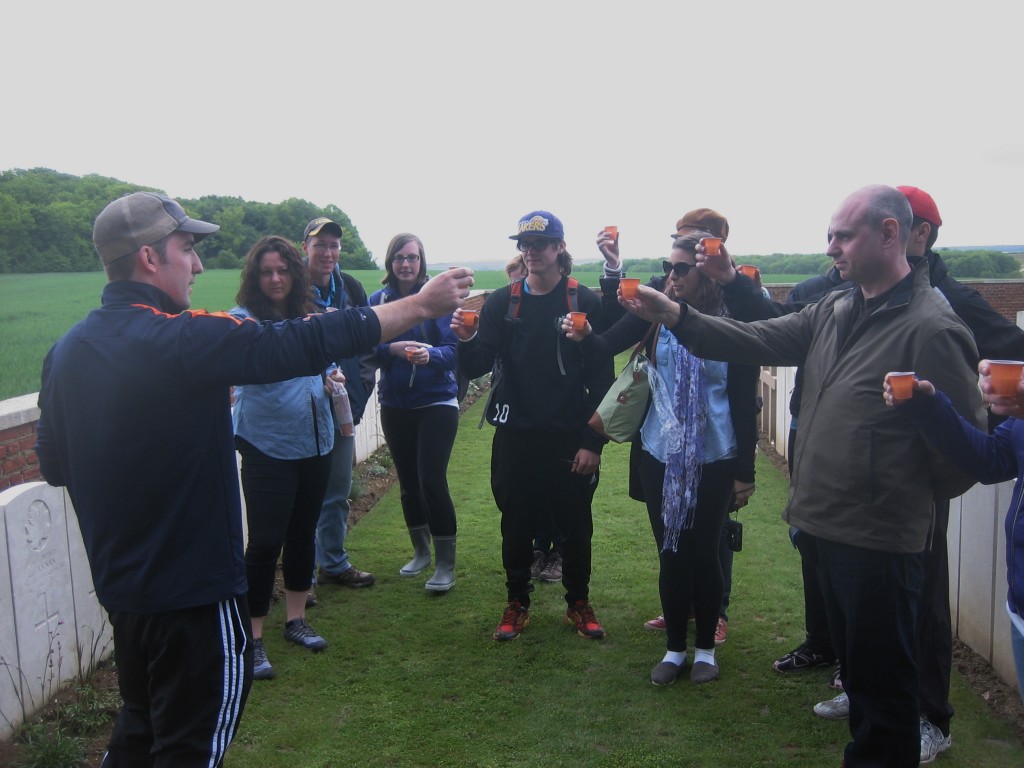 Later that evening, and during the next couple of days, I gradually realized that we had a special group this year. All twelve participants were clearly intellectually and emotionally engaged in the undertaking. This struck me especially on the fifth day, when we visited the Arras-Vimy sector. As with past tours, I began that morning not at Vimy’s Hill 145, but a little further north on the crest of Notre Dame de Lorette spur, a height that overlooks much of the 1917 Arras battlefield. Notre Dame de Lorette is also the burial place of many thousands of French soldiers who died on those same fields in 1914 and 1915 – there are nearly 40,000 burials at the site. The point of that particular stop was to contextualize the 1917 battlefield, and to remind the students that Canada fought the war as part of an alliance. Based on the discussion that followed, I was certain that we had achieved these two objectives. However, I also realized that Notre Dame de Lorette, as a commemorative site, had deeply moved the students. One of them, Eric Fowler, later said to me, ‘you didn’t prepare us for that.’ He was right, but sometimes it is best to let a place speak for itself. 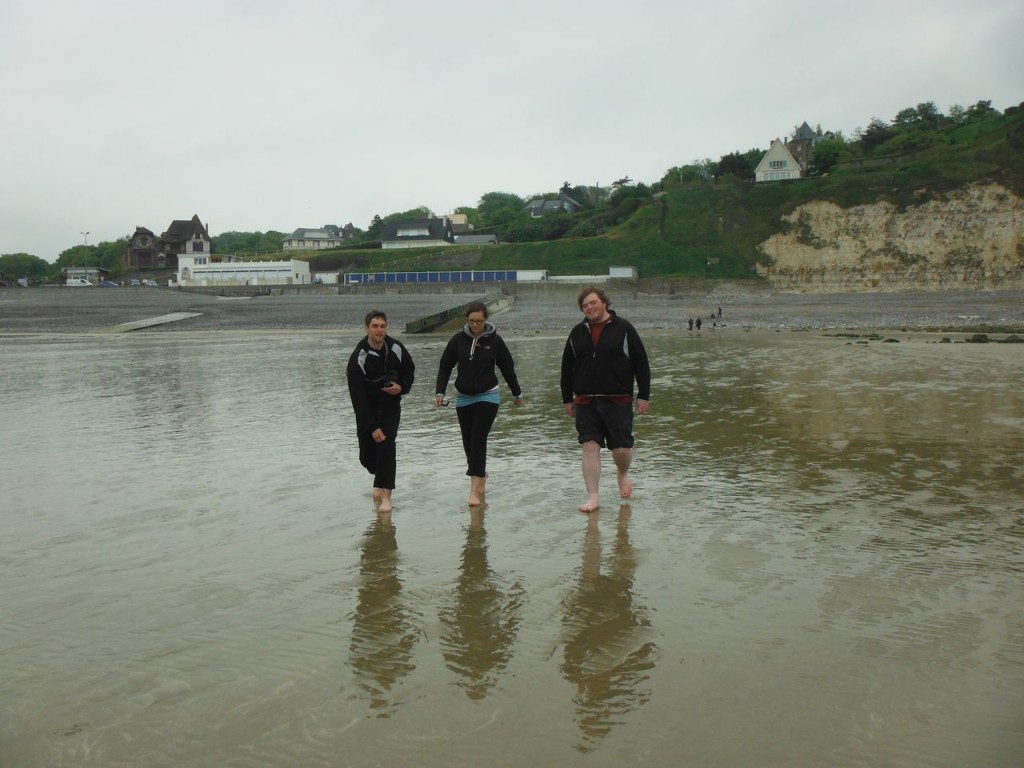 David Suatac, Lacey Zukewich, and Eric Fowler get their feet wet in the English Channel at Blue Beach (Puys), one of the Canadian landing sites in the ill-fated Dieppe raid of 19 August 1942. (Photograph by Amanda Green)

I will not say much more about the itinerary  – the participants have already blogged extensively on our daily activities, including Katie Domansky, who has recently posted a guest blog here for LCMSDS. But I would like to say something more about the individuals in this year’s group, because they humbled me. Without fail, they treated each other kindly. (Even after two weeks crammed into a couple of vans together, I was thrilled to learn that the whole gang had stayed together for their final day in Paris before flying home. That is something.) They also made a universally positive impression on everyone we met along the way, including my parents, who joined us for a few days in Normandy. (We were also delighted to cross paths with Professor Terry Copp at Juno Beach on 6 June – Terry was my supervisor when I was a graduate student, and we first met fifteen years ago when he was the tour leader on the 1998 CBF tour. Where did the time go?) 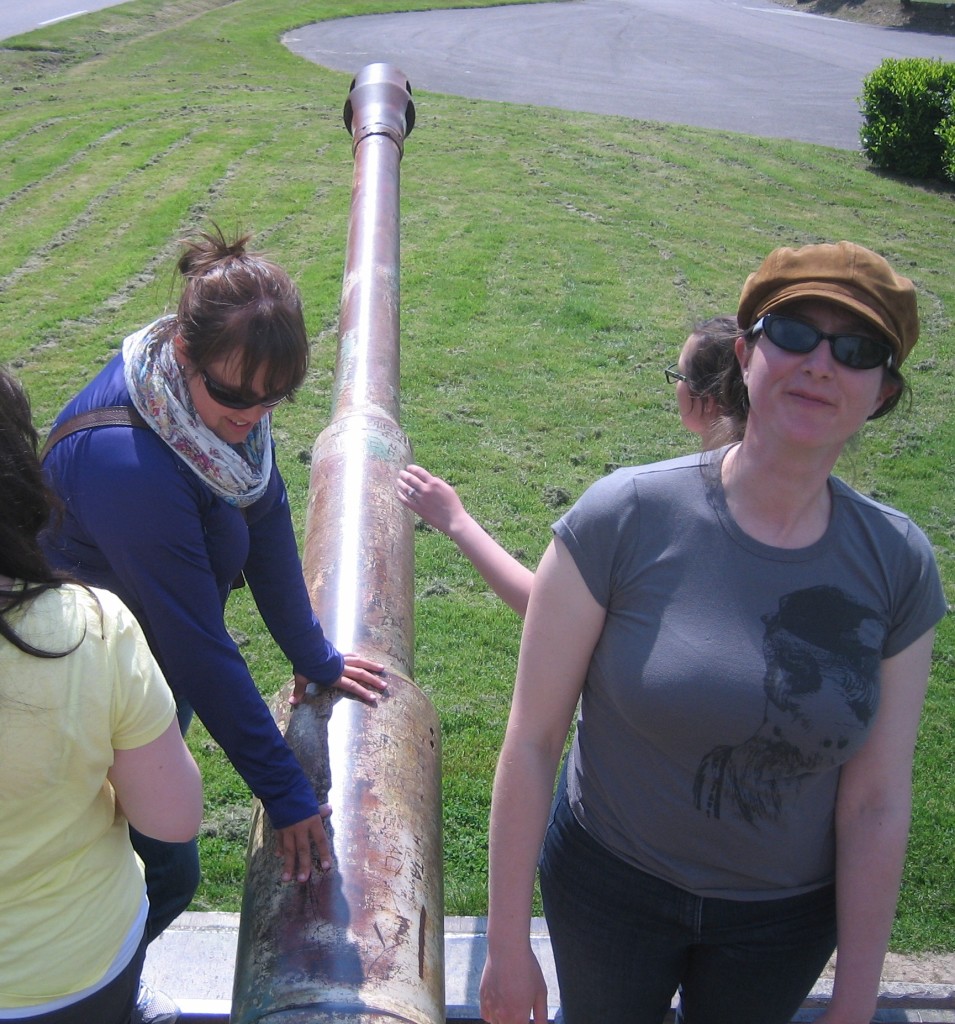 Becky Weir and Sanna Guerin size up the main gun on the Tiger tank at Vimoutiers, in Normandy.

Each participant brought something special to the group this year, and to be sure, each had an unmistakable personality that made the tour especially enjoyable and satisfying. Let me try to do justice by saying a few words about each one:

Erin Cerenzia, from Newmarket, Ontario, is a graduate student at Western University. Erin displayed unfailing cheer at every moment, and better still, a genuine curiosity and amazement with each new discovery. One cannot ask for better qualities in a student.

Eric De Kroon, from Eastern Ontario, and a student at Trent University, is a gentleman and a scholar in the truest sense. Eric easily commanded any room with his gifted speaking voice, his way with words, and his understated confidence.

Katie Domansky is a doctoral student from Calgary. Katie was unflappable. As the rest of us shivered in the cold and damp at Arras, or on drizzly shores of the English Channel, Katie maintained a calm serenity, ready to tackle the next intellectual challenge. (If we had to refight the battle of the Somme or the battle of Normandy, I would want Katie to be nearby.)

Eric Fowler, from Memorial University, is a true Canadian in the sense that he grew up moving across the country with a Canadian Forces family. Rarely have I encountered a student who was affected quite as profoundly by the human cost of the operations that we examined. And Eric was tough enough to show it.

Sanna Guerin is an old colleague from the Canadian War Museum, who is also taking graduate studies in Ottawa. Sanna was fully invested in the tour from the first minute, and deeply moved us all when she made a graveside presentation about her great-uncle Francois Houle, who was killed on 27 August, 1918.

Colleen Molloy is a graduate student at Western and a native of London, Ontario. Her mature, quiet wisdom reminded me more than once that I had jumped to a conclusion too quickly, and needed to rethink the issue at hand. I hope that she knows that.

Bruce Moncur is a recent graduate of the University Windsor, and a proud Windsor boy. A veteran of the war in Afghanistan, Bruce’s spirit was indomitable, and his sense of humour never failed. He quietly carries life experience and wisdom far beyond his years.

Karl Price is an engineering graduate from the University of Waterloo who had no trouble at all finding his feet in group dominated by historians. As one of the few group members who speaks French, he was also a real asset to his mates when ordering meals or buying groceries.

Eric Story is an accomplished young scholar from Saskatchewan, and a great ambassador for that province. His keen questions from the back of the van reassured me that he, and the group at large, was genuinely interested in the historical material that we covered throughout the tour.

David Suatac studies in Ottawa, and has his own fair share of guiding experience under his belt in Canada. His dry sense of humour brought relief during some of the difficult moments of the tour, and David’s easy manner of speaking made for some excellent historical presentations.

Becky Weir put life’s other preoccupations aside to return to school in pursuit of a graduate degree at the University of Waterloo. She was a force of nature on the tour, always ready to kick-start a discussion with provocative insights.

Lacey Zukewich has recently completed a teaching degree in Manitoba. Lacey is a dynamo. As a Canadian Forces reserve soldier, Lacey demonstrated excellent presentation skills, be it on the battlefields, or teaching yoga or Irish dance steps to her tour mates. 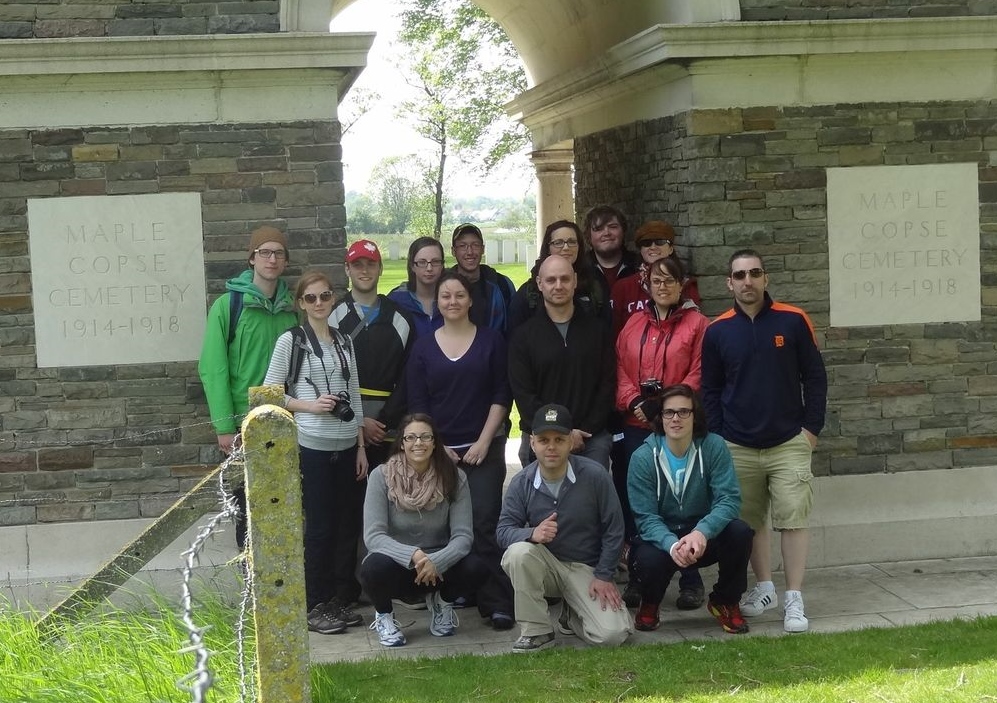 And finally, I salute my guiding partners, Graham Broad and Amanda Green. Graham is a scholar who is especially widely read, and could speak on just about any topic with two minutes warning. He spearheaded the blogging program on this year’s trip, and coordinated some fine meals at Chavasse Farm. Amanda had probably the toughest job of all – piloting the second of our two vans. Despite my sudden turns and erratic way finding in the lead van, Amanda kept up – without complaint – for the full two weeks.

Sometimes the tour leaders get so preoccupied with countless daily administrative chores, driving, navigating, and preparing for the next stop, that we forget to pause and take it all in. I would like all of the participants from CBF 2013 to know just how much I prized the experience, primarily because the company was so fine. I learned something from everyone, and I would pack up and do it all over again tomorrow without a second thought.