By Adam Lajeunesse (University of Calgary)

In 1958 the USS Nautilus completed its historic transit under the North Pole and across the polar ice-cap. The voyage was as a much about publicity as it was a strategic exercise. Nonetheless, it demonstrated in dramatic fashion how accessible the Arctic had become to modern submarines. Given its strategic location between the competing superpowers it was inevitable that both would seek to expand their presence in the region. As such, as part of a larger Arctic program, the US Navy deployed its first submarine into Canada’s northern waters in 1960. The USS Seadragon was sent through the Parry Channel to survey the region and to determine the feasibility of using the Northwest Passage for future under-ice operations. The mission was a success and followed two years later with a similar transit by the USS Skate.

These two operations were undertaken with the consent and cooperation of Canada yet, after the Skate,the US Navy ceased to make its northern operations public. This classification meant that the number and frequency of these voyages have long remained a mystery. So too has their operational purposes, their routes and, most importantly from a Canadian perspective, the political framework in which they took place. Given the Americans’ historic refusal to accept Canadian sovereignty over the Northwest Passage, the question most often raised was: were these operations taking place in secret and, if so, were they setting a precedent which might damage Canadian sovereignty?

This research note presents the first evidence of what transpired in the Canadian Arctic after the voyage of the USS Skate in 1962 and provides the first answers a number of important questions. Attached is a short list of under-ice cruises which has been compiled from documents found in the Waldo K. Lyon Collection, housed at the US Navy’s Naval Historical Center’s Operational Archives in Washington, DC. The principal source used is entitled “Under Ice Data,” a chronological list detailing the US Navy’s circumpolar operations from 1945 to 1986 with brief but important descriptions of the Navy’s northern operations. Attached as well is a map from that same collection showing the circumpolar transits from 1958 to 1986 and a chart illustrating the number of circumpolar operations in relation to the transits through Canadian waters. Material for this chart was taken from the above mentioned list with details from the US Navy’s Arctic Submarine Laboratory used for the years 1986-2011.[1]

This documentation is, however, very incomplete because the overwhelming majority of material covering these voyages remains classified. Indeed, the documents from which this list was compiled are themselves no longer available, having been removed from the archives to undergo a fresh security review. Yet, from what has been made available, a few crucial conclusions can be reached with some confidence. Firstly, the number of American transits through the Canadian Arctic Archipelago has been relatively small. From 1960 to 1986 there were only eight complete transits through the region. The idea that the US Navy used Canadian waters as a regular patrol area can therefore be discarded. So too can the theory that it may have used Canadian waters as a deployment area for ballistic missile submarines (SSBNs). From the records it is clear that the submarines transiting Canadian waters were all attack boats.

Of more importance was the political framework in which these operations took place. From the brief operational details uncovered it is clear that the majority were undertaken with the full cooperation of the Canadian government and even occasionally with its participation. The voyages of the USS Archerfish and the Silversides were officially labelled joint operations while the presence of the USS Flying Fish in Canadian waters even appears to have been at Ottawa’s request. The USS L. Mendel Rivers is listed as testing Canadian sensor systems in the region, a common task which seems to have been designed to increase Canadian detection capability in a number of strategic choke points. In fact, of all the operations listed there are only two for which there is no immediately available evidence of Canadian participation (the USS Pintado and Spadefish). Yet information on these voyages remains classified and it is too soon to say with any certainty that they were undertaken without the knowledge of the Canadian government.

From what is available, it is probably safe to conclude that the United States and Canada worked closely on the question of under-ice defence throughout the Cold War. American submarine operations were not undertaken in secret but with the full knowledge and support of the Canadian government. What affect this may have had on Canada’s political and legal position in the North remains uncertain, however it is not likely to have been detrimental, as has been generally assumed.

These are, in fact, very new conclusions which go against much of what has previously been assumed. For the most part, academic experts have traditionally suggested that it was unlikely that Canada was closely involved in American submarine operations and it was often feared that these voyages might have serious consequences for Canada’s northern sovereignty. In 1987, for instance, John Honderich wrote that “to expect the United States to routinely inform Canada every time one of its submarines traverses Canadian waters is to fail to understand how the U.S. military works.”[2] In a book that same year, Franklyn Griffiths hypothesised that one day the United States might be able to bring the log books of secret submarine transits to the International Court of Justice as evidence that the Northwest Passage had long been used as an international waterway.[3] In 1998 Elizabeth Elliot-Meisel wrote that Canada likely had no way of monitoring or stopping the transit of these boats.[4] In 1990 David Larson guessed that Canada might have been able to establish some form of secret agreement with the Americans, though he felt that it was just as likely that the transits were being made without Canadian permission.[5] In 2008 the authors of Arctic Front wrote that these submerged transits, if secret, might establish the precedent required to classify the Northwest Passage as an international strait.[6] In the most recent major work on the subject, Shelagh Grant argued in 2010 that the presence of these undetected submarines posed a danger to Canadian sovereignty, even if only a theoretical one.[7]

Yet, it seems unlikely that this could be the case. The Canadian Department of National Defence had certainly considered the issue and, as early as 1971, had concluded that a submerged transit could not establish a right of passage.[8] In order to be admissible to a court as evidence of a strait’s usefulness to international traffic, these submarine voyages would have had to have been public knowledge. An examination of the records of the ICJ and similar bodies does not yield a single example of a state using a secret voyage as evidence and Rob Huebert has noted that international tribunals can only publish evidence that is publicly acknowledged. As state secrets, submarine voyages would have no such standing.[9] The Corfu Channel Case itself used only the records of British warships and the commercial vessels that had docked at Corfu harbour and submitted themselves to customs inspection.[10] The many vessels that transited without submitting themselves to customs in Corfu were not included in the court’s calculation. As this case is the precedent upon which the relevant law is based, it seems highly unlikely that unregistered and highly secret submarine passages could be considered a precedent for making the Northwest Passage an international strait.

If the fact that Canada knew about the transits could serve to remove the secret nature of the operations then a case would have to be made that they were being undertaken without Canadian consent and had been conducted with enough regularity to establish a certain route as a convenient international waterway. This would seem an impossible proposition. To begin with the transits appear to have taken different routes through the Archipelago, obviously to chart and explore as much of the region as possible. As such, there was no one route through the region which was travelled repeatedly – no one route which these boats were establishing as a useful strait for navigation. There also exists clear evidence to show that at least the majority of these voyages were being undertaken with Canadian concurrence and even cooperation. Canadian observers were aboard a number of voyages while Canadian forces were often involved in the transits in one way or another. These voyages were part of the decades long joint continental defence effort and were no more likely to establish a right of international navigation than the DEW Line resupply voyages of the 1950s.

Like those icebreaker missions, American submarine operations were also covered by pre-existing joint defence arrangements. In 1952 the PJBD had decided that a need existed to streamline and simplify the operations of Canadian and American warships engaged in continental defence. Vessels often travelled into the waters of the other state and constant diplomatic applications for clearance was considered both unnecessary and inefficient. As such, the PJBD established simpler rules for naval clearance in the form of Recommendation 52/1:

In the interests of the security of the northern part of the Western Hemisphere, Canada and the United States should make provisions to ensure that public vessels of either country engaged in matters of concern to mutual defence should be able to visit ports or territorial waters of the other country, or its possessions, with a minimum of formality.[11]

To ensure that this was the case, the PJBD stipulated that, while diplomatic visits should continue to be coordinated through diplomatic channels, “informal or operational visits” would require only “advanced notification through service channels.”[12] These new rules were approved by the Canadian government on May 19, 1952 and two days later by the Americans. Since American submarine transits were clearly engaged in matters of mutual defence and clearly operational and not diplomatic in nature, there was no need for a formal diplomatic request and no need for Ottawa to have granted any formal permission. All that was required was the notification of Canadian service authorities and this appears to have taken place.

As such it seems unlikely that American submarine operations could be considered a danger to Canadian Arctic sovereignty. They were undertaken with the full knowledge of the Canadian government, which both gave its consent to the operations and cooperated with the US Navy in a series of war games, sensor tests and scientific missions. The common assumption, that the United States might have been sneaking around the Northwest Passage or that its operations might in any way have been detrimental to Canada’s political or legal position, therefore appears quite mistaken. This conclusion is, of course, based on a very small amount of documentation and a more complete understanding of the defence relationship from the period will have to await further declassification. For the time being however, many old assumptions about Canadian-American relations in the Arctic will have to be rethought. 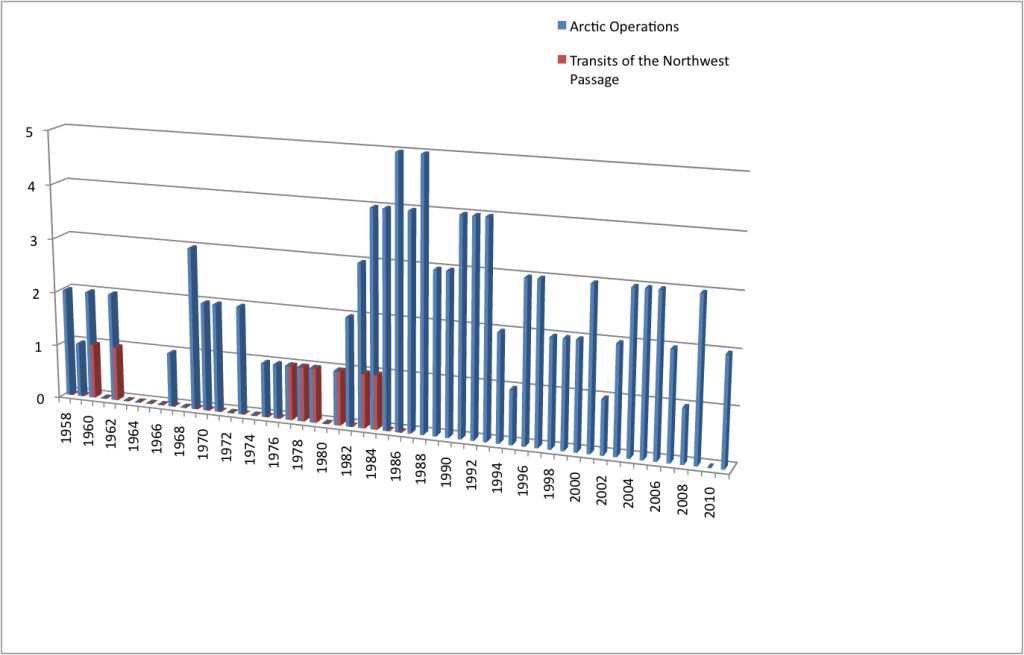 US Submarine Operations, 1958-1983 (date from the Waldo K. Lyon Papers and the US Navy’s Arctic Submarine Laboratory) ** Note: no data is available on cruises through Canadian waters from 1986 onwards. It is uncertain how many of those operations may have used the Northwest Passage. 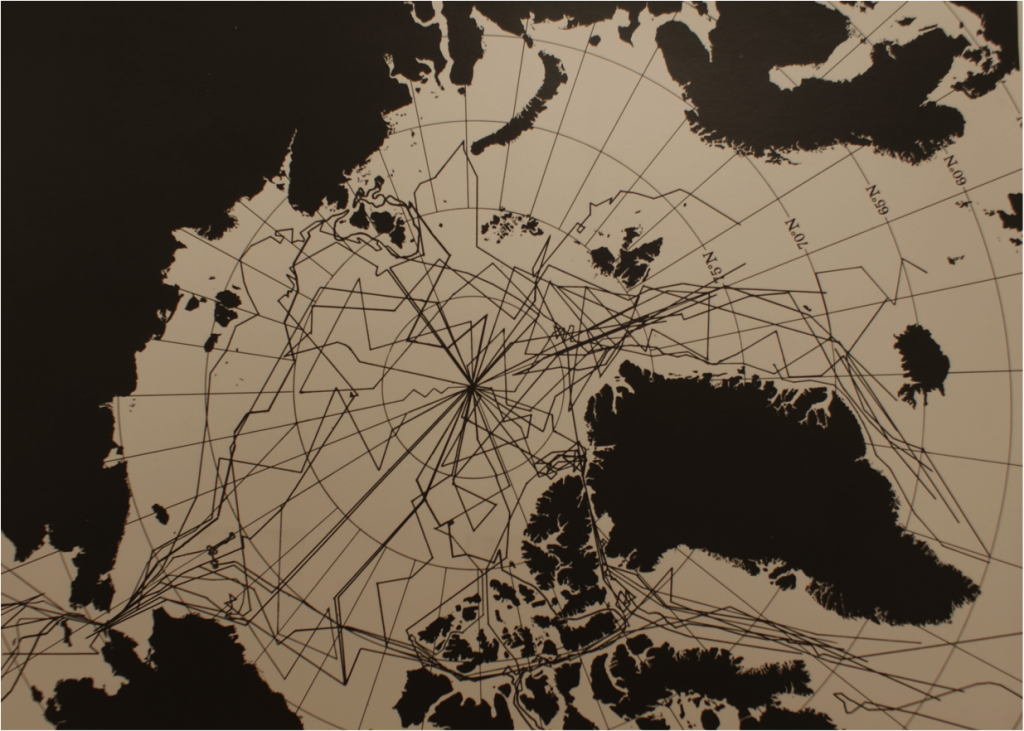 * Some material for this piece was taken from: Adam Lajeunesse, “A Very Practical Requirement: Under-Ice Operations in the Canadian Arctic, 1960-1986,” Journal of Cold War History (November, 2012). See this article for a more in-depth examination of this question.