Review of Alan Bowker’s A Time Such as There Never Was Before: Canada After the Great War by Brian Tennyson 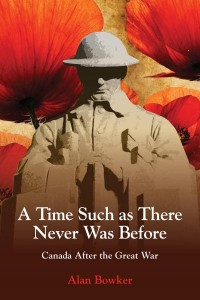 The Great War continues to fascinate us a century after its outbreak. Thousands of books have been published in many languages trying to explain its origins, its nature, the strategies and tactics, the apparent failures of the generals and the impact of its mass slaughter and mutilation of millions of men. There is a good reason for this because it was, as most people came eventually to recognize, a sharp dividing line in the evolution of western civilization. It is a cliché to say that the nineteenth century ended in 1914, but like most clichés this one is essentially true.

Curiously, not much has been written about the aftermath of the war except for books which rightly point out that it was the instability of the 1920s and 1930s that led to the rise of fascist regimes in Italy and Germany and resulted in the Second War—or Round Two of the Great War, as many would describe it. This general lack of interest in the 1920s is especially notable in Canada, which historians have generally skipped over lightly on their way to the seemingly more interesting 1930s.

Happily, Alan Bowker has addressed the situation with A Time Such as There Never Was Before, a history of Canada in the 1920s, and has done it well. This is a large densely-packed book of just under four hundred pages of text, not including endnotes and bibliography. And it’s all there: the struggle of the returning veterans to readjust to civilian life; the well-intentioned but ill-conceived effort to settle thousands of them on new farms in the northwest; the Spanish influenza epidemic; the impact of the war on prewar social reform movements which embraced the war as a noble crusade that must surely led to a new and better world; the political uprising of the farmers and organized labour and the destruction of the two-party political system; the dramatic increase in American investment and cultural impact on English Canadian popular culture; the tentative beginnings of women’s liberation but the persistence of racial and ethnic prejudice; and more.

As thorough as Bowker is, however, one cannot help regretting that some issues are passed over more quickly than one might think they should be. The dramatic changes in the Canadian economy, most notably its emergence as a supplier of raw materials to the United States, are barely touched upon. Similarly, the constitutional dilemma that plagues us still—the rapid growth of expensive provincial responsibilities such as education, roads and social programs despite inadequate provincial tax powers—is ignored, as are politics generally except in regard to specific issues like prohibition and women’s suffrage. The alarming emergence of American-style racism as with the appearance of the Ku Klux Klan in Saskatchewan and Ontario is only hinted at as part of an otherwise excellent treatment of continuing racial, religious and ethnic prejudice in the postwar world.

More concerning is the virtual absence of the Maritime provinces, aside from occasional references, from the book. This may seem like petulance from an historian who lives and works in the region but it’s actually a serious problem because, while the rest of Canada was generally enjoying a prosperous decade after the immediate postwar slump, this was a period of traumatic economic collapse, from which it has never recovered, in the Maritimes. A variety of factors contributed to this but most significant was the nationalization of the railways (except the CPR), which Bowker does discuss but apparently without realizing its particular significance to eastern Canada.

When the government created Canadian National Railways, it included in the new company the Intercolonial Railway (ICR), which the federal government had built and operated since the 1870s. This proved to be disastrous because the ICR had subsidized the cost of shipping goods from the Maritime provinces to Central Canada. Although it is rarely discussed by historians as such, this was an important part of the National Policy because it helped industries in eastern Canada get their goods to the main Canadian market at competitive prices. The CNR, however, backed by the government, saw no reason why freight rates in the Maritimes should be different from those elsewhere (although it retained the Crow’s Nest Agreement in western Canada) and promptly abolished the subsidy.

The impact on Maritime-based industries was immediate and catastrophic. Between 1919 and 1921 the number employed in manufacturing in the region declined by nearly forty-two per cent, as companies moved to central Canada or drastically reduced the scale of their operations. In the course of the 1920s industrial Cape Breton—the British Empire Steel and Coal Company, whose two steel mills and mines had produced thirty-five per cent of the nation’s pig iron and more than forty-four per cent of the nation’s coal during the war—ruthlessly slashed wages in an effort to remain competitive. One steel mill closed in 1920 and the resulting industrial turmoil required the use of troops to maintain order. When the great depression arrived in the 1930s most people in industrial Cape Breton failed to notice any real difference. The federal government’s economic policies in the 1920s led to the formation of a Maritime Rights Movement which so alarmed W.L. Mackenzie King—who led a minority government until 1926—that he set up a royal commission to investigate the problem. Needless to say, when he won a majority in the 1926 election, he lost interest and it was not until John Diefenbaker came into office in the late 1950s that the federal government established an equalization program and policies to encourage regional economic development.

Another startling weakness, which undoubtedly is not Bowker’s fault, is that his endnotes are not included in the book. They exist but to see them the reader is directed to the publisher’s website or Bowker’s personal website. The decision to omit them from the book presumably reflects the publisher’s concern about the cost of including seventy-three more pages in the book, but it was a disservice to both the author and his readers.

There is little in this book that will interest students of Canadian military history. To be fair, it was not on the whole an interesting or at least encouraging decade for the armed forces, as the King government spent the decade cutting the defence budget in the naïve hope that the armed forces would not be needed again in the foreseeable future. At the same time, even though the army was used on a number of occasions to suppress strikes, the only strike that Bowker discusses is the Winnipeg General Strike, in which the army was not involved (although veterans were).

These are quibbles, however. Bowker, who is recently retired from a distinguished career in the Canadian Department of Foreign Affairs but is also a qualified academic historian with a particular interest in Canadian social history, has written a highly readable and generally thorough and fascinating account of the 1920s, showing the tremendous impact of the Great War on Canadian society. It will be widely read and enjoyed by both historians and the general public.