Review of Andrew B. Godefroy, In Peace Prepared By Caroline D’Amours 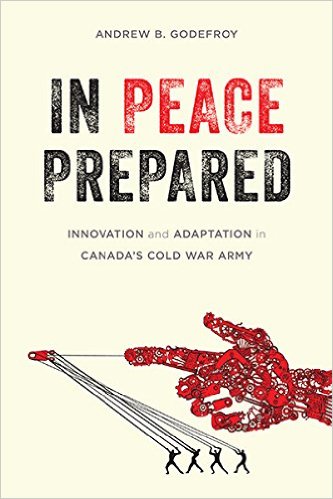 During the first two decades of the Cold War, with the invention of the atomic bomb by the United States and its replication by the Soviet Union, the Canadian Army was exposed to a completely new type of warfare. In this extremely well-written and thoroughly researched work, Andrew B. Godefroy explores what the Canadian Army did to be successful on this new conventional-nuclear battlefield. Employing a diverse collection of archival records and published material such as the Canadian Army Journal and Volunteer Review and Military and Naval Gazette, Godefroy introduces the reader with a much-needed reinterpretation of the institutional development and organizational culture of Canada’s early Cold War Army as well as an explanation of how and why the army evolved as it did. The book further provides important insights into how politics, military personalities, accident and contingency as well as the impact of the information age affected the design and the creation of a modern professional army prepared to fight the battles of a conventional-nuclear war.

Godefroy’s work questions the prevailing historiography that the postwar Canadian Army “lacked any strategic culture that could enable it to innovate and adapt at the same level as its Cold War-era allies” (p. 11). As the author observes, this situation is the result of the lack of investigation of the Canadian military innovation and adaptation process      for the post-1945 period, studies having focused until now on the higher levels of military politics or the lower level of battlefield operations. Departing from those positions, Godefroy adopts Paul Kennedy’s “history from the middle” approach,[1] a far more comprehensive analysis that helps understand the military problem solving process of the “middle managers of war.” This approach enables Godefroy to explore how and why the Canadian Army officers (the captains, majors, and lieutenant-colonels) and the civilian defence personnel (the scientists, designers, engineers, technicians, and administrators of the army) got things done. In Peace Prepared persuasively argues that the Canadian Army during the early Cold War years had a strategic culture and was far more capable of innovating and adapting than previous works have assumed.

Organized into six chapters, Godefroy’s study covers the Canadian Army’s answer to the threat of a possible third world war between the end of the Second World War in 1945 and the unification of the three armed services into a single Canadian Forces in 1968. The first chapter traces the development and maturation of the strategic thinking culture of the land forces from the late nineteenth century until the end of the Second World War. Chapter 2 examines the influence of the demobilization on the army’s combat development process and the army’s effort to reshape its frameworks to continue to innovate and adapt in the five years following the Second World War. Chapter 3 analyses the response of the Canadian Army in the first half of the 1950s to military problems associated with the defence of Canada, the conduct of limited “hot” war in Korea, and the deterrence of war in Europe against the Soviet Union. The chapter thus highlights the increasingly erroneous conclusions emerging from the older methodologies and the need for the Canadian Army to improve its use of quantitative data and adopt mathematical models in military problem solving when approaching the conventional-nuclear battlefield.

Chapter 4 shows that, even though a portion of the Canadian military between 1954 and 1958 did not understand the true characteristics of atomic war, the army was able to solve many critical military problems it faced, such as the need for true land mobility, and to develop a systems-based approach to problem solving. Chapter 5 explains how the existing army combat development organizations, facing important budget cuts between 1958 and 1964, were able to improve significant aspects of modern military problem solving by adopting new quantitative methodologies, such as modern war games, to analyze and evaluate the latest operational concepts in the conventional-nuclear battlefield and, in this way, propose more appropriate solutions. Chapter 6 details the difficult attempt of the army to sustain institutional combat development during the process of integration of the three armed services into a single unified Canadian Forces between 1963 and 1968. According to Godefroy, with these defence reforms, “the government essentially denied the army any further control over its own vision and coerced the institution into adopting a specific politically driven force structure derived neither from analysis of the future security environment nor any robust land force concept development and experimentation” (p. 210).

One of the author’s central objectives is to refute the prevailing idea in the historiography that, because the Canadian Army was not able to exert great influence over its Cold War allies, it lacked a strategic culture and hence was not able to prepare for possible future wars. As Godefroy explains, this position is not sustainable in regard of the numerous evidences available to the researcher in the archives. One could add that it would have been difficult—and still is—for such a small military institution as the Canadian military to be a major influence on American and British thinking, countries with much larger and wealthier armies. Since the Canadian Army was part of a greater alliance, its officials had to collaborate on the creation of allied future operating concepts so that the Canadian formations could be easily interoperable with its allies in future conflicts. It was thus normal that the Cold War-era allied doctrine formed the basis from which the Canadian Army would develop its own distinctive capabilities in response to the Soviet threat. Even though the Canadian Army had to follow the allied operating concepts, it was able to critically think, innovate and adapt to the new battlefield as well as effectively prepare its own components during the first two decades of the Cold War. As Godefroy suggests: “As in other NATO forces, conceptual and doctrinal design lay at the core of the Canadian Army’s systemic approach to military problem solving both in peace and war, and without it the army would have been nothing other than a poorly armed mob” (p. 10).

If In Peace Prepared traces back the institutional development and organizational culture of Canada’s early Cold War Army, one of its strengths is the author’s ability to show where the army jurisdiction ended and the influence of the political sphere began. Of course, the Canadian Army military problem solving process failed on its own sometimes. But, as the author convincingly argues, the impact of the Canadian political system was one of the many factors that could also affect the process. In fact, even though the Canadian Army developed an effective combat development cycle during the first two decades of the Cold War, it is important to remember that this process existed only to inform and guide civilian politicians and bureaucrats’ force development decisions, not control them. When there was a difference of views, especially in time of peace and when the money was scarce, this could bring the politicians to ignore the professional advice received from the military.

Although Godefroy’s overall argument and presentation are very strong, one critique can be made with regard to content. It would have been interesting to compare at some point the military problem solving process and the solutions adopted by Canada’s Cold War-era allies regarding the problems they all faced. In this way, it would have been easier for the reader to assess the effectiveness of the Canadian combat development process and see that the Canadian Army was able to innovate and adapt at the level as is suggested by the author.

Ultimately, by stressing the evolution of Canadian Army strategic thinking and institutional development as well as what the Canadian Army did to be successful on the new conventional-nuclear battlefield during the first two decades of the Cold War, In Peace Prepared is a major addition to Canadian historiography. Written in a clear and compelling style, this work will appeal to academics and professional military personnel who wish to learn how big and complex is the task to plan, establish, build and manage a modern professional army.