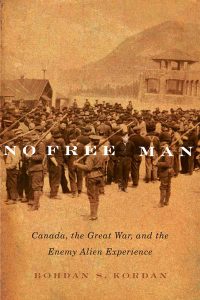 Bohdan Kordan writes extensively on internment in Canada during the Great War with this being his fourth major effort in this area. There is value in this book for what it brings to light and where it points to for future research.

Kordan seeks to contextualise the enemy alien experience in Canada during the Great War. He has conducted extensive and detailed research into the Canadian internment programme and has translated that effort into a highly readable text. The first four chapters are the strongest part of this work. They are soundly structured and flow well from the start of the war and the origins of the internment programme to the armistice and the final deportation of those perceived as undesirable from Canada. There are highly entertaining segments of the Canadian experience brought to life in Kordan’s narrative. He relates well the spy hysteria during the war—a phenomena that predated it. He highlights the long-standing Canadian fear of invaders perched across the United States border which echoed worries from the War of 1812, the Hunters’ Lodges and the Fenians. He sympathises with the struggles of General William Otter to make his organisation effective while his best men were being siphoned off to Europe. He also reveals the perpetual interplay between regulations, new or old, and their interpretation and enforcement to specific cases—whether you wish to call these proceedings callous or merely bureaucratic. Especially interesting is the maneuvering of municipalities in the early days of the war to force the federal government to accept the burden and responsibility for the unemployed, and the subsequent competition between federal, provincial and business entities to take advantage of the labour of the internees. Kordan provides good detail of the programme in all its phases and particularly of the problems of the work camps.

However, there are flaws in this work. There are two similar structural flaws. First, in each chapter there are repetitive paragraphs and pages and the chapters are not properly concluded. Second, Chapter 5 is merely a rehash of the other chapters with little or no new perspective or analysis and, after 268 pages, it does not refocus and reinforce the main arguments of the book but rather drags it to an end. In addition, the author is self-referential for a complex unproven concept (p. 277); given to over-generalising with unproven or limited data (pp. 131, 271); dismissive due to presentism and a lack of historical context in places (p. 56); and occasionally muddles whose voice, the historical actor’s or the author’s, is speaking (p. 263).

This work could have been improved if the author had approached some of the issues from a broader context and made more use of comparative analysis. Kordan’s focus is so narrow at points that it is unclear that Canada was simultaneously engaged in a global struggle for survival while it was running an internment operation. More context would have been useful in examining charitable and industrial practices in Canada as well as in discussing emergency legislation and government organisational practices and norms. For instance, the author laboriously points out the clauses in the Hague Convention concerning work but does not consider whether Canadian charitable practices would have demanded work-for-food anyways from civilians, a practice imposed on the western Cree in the 1880s and the enduring norm of the British Poor Laws and workhouses. Many were interned due to unemployment but industrial conditions in Canada receive little attention. Greater explanation of the work conditions in Canada may have supported the stated harshness of the camps. The historiography on working conditions in Canada is extensive, including works by Ian Radforth, John Mellor, William Kilbourn, Duncan McDowall, Michael Bliss, and Craig Heron. Similarly, the activities of the Imperial Munitions Board, so crucial to the Canadian industrial effort during the war, are not mentioned whatsoever though they had a critical influence on unemployment and workers’ ability to move between employers. Further, governmental culture could have been more fully explored in two areas. First, this was the “first” Great War. It developed in unpredictable ways and demanded new and unforeseen governmental approaches (p. 46). It is unsurprising, therefore, that things were not organised smoothly, and some things were bungled—this included the interpretation of new emergency regulations and the measures taken to enforce them. Nor in this context was Canada the first government to prioritise security over individual rights, long a common practice in emergency situations. Second, the British governmental tradition of parsimony, well-transplanted to Canada, should be no surprise to scholars and should not be viewed as a plot so much as a norm, a usage of bureaucracy, especially for long serving officers such as General Otter.

The author’s analysis could have been improved with greater use of comparative data. What little data he does use relates to the “carte blanche” he seems to grant Germany in its treatment of prisoners, which I would suggest many, including Desmond Morton, might refute. Civilians were interned across Europe and elsewhere and even a cursory examination of these other programmes could have helped put the Canadian experience into better context. Morton, in his works on Canadian prisoners of war and veterans, makes extensive use of statistical analysis to further his arguments. Kordan, who often leaves the impression that he is over-generalising from a small sample, much less so. He is also silent on how the camp complex influenced future Canadian government policy. If he had touched on the use of work camps during the Depression and internment activities during the Second World War, it might have helped gauge the utility and influence of the Great War programme.

Internment in Canada during the Great War remains a complex issue. There should be little debate that legitimate enemy reservists and prisoners of war should have been interned. That the unemployed, who were primarily Ukrainian, were interned as well was initially a response to the overwhelmed charitable capacities of the various municipalities and later to heightened security concerns. The Canadian militia was the only federal institution capable of supervising such a large undertaking. Much of the camp experience of the internees, therefore, reflected that institution’s cultural practices ranging from sentries patrolling wired perimeters to the application of military discipline. Overall a total of 8,579 enemy aliens were interned, but the tide had largely ebbed by mid-1916 with most of those who were detained being released to work programmes across the country. From late 1916 until the end of the war, approximately 2,500 internees, mostly German and those enemy aliens deemed to be either hostile or agitators, were held. Internment was one of a multitude of programmes the Canadian government implemented in the Great War. It affected only a small fraction of people compared to those who fought in the trenches and only a fraction of the German and Ukrainian communities.

This book provides good detail on most aspects of internment operations in Canada during the Great War. It is revealing and useful in this sense. In seeking to contextualise the enemy alien experience in Canada during the Great War, Kordan has been successful for those Ukrainians interned, not so much for those not of that nationality, and not for those Ukrainians not interned. This book must be read with caution. Have no doubt, though for the most part a balanced presentation, this is redress literature in which Kordan, like Lubomyr Luciuk and others, seeks reparations for the Ukrainians interned during the war. This in fact is the theme of most of Kordan’s writings. Many of the more unbalanced arguments presented in this brand of historiography have been thoroughly demolished by Orest Martynowych decades ago in the Journal of Ukrainian Studies. Besides describing the programme so well in the first four chapters, this book is useful in where it directs historians to future research. An exploration and analysis of Canada’s long-term use of both camps and emergency regulations would be of great value.