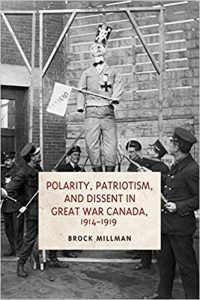 As we approach the 100th anniversary of the Battle of Vimy Ridge in April 2017, which coincides neatly with the 150th anniversary of Confederation, there will likely be a conflation of celebratory nationalism in the commemorations marking these events. The Great War, and specifically Vimy, will be presented as a nation-building event, one that forever changed the country and set it upon the long road to full nationhood. While this is not an incorrect reading of history, the war’s terrible losses and unfettered exertions also nearly tore the country apart. Never were Canadians more divided than during the Great War.

Western University professor Brock Millman, an expert on home front politics and society in Britain during the Great War, has provided a stimulating book that examines, as the title suggests, how the extremity of the Canadian war effort rocked the dominion to the core. Millman examines how the Sir Robert Borden government, armed with nearly unlimited powers under the War Measures Act of 1914, restrained opposition to the war, managed dissent through threats and punishments, and dealt with the severe strain of the massive war effort. In this regard, Ottawa generally succeeded in silencing those opposed to war, but it did so by trampling rights and freedoms, censoring newspapers, locking up those deemed untrustworthy and crushing opposition.

The Borden government proved it was willing to do almost anything to win. While other historians have examined these topics, Millman brings the many themes together in this well-argued and deeply-researched book. It is an important contribution and many previously examined subjects are presented with new evidence or nuance. Taken together, the swirling mess of Canada, with its fierce patriotism mixed with intolerance and stirred by the unending deaths from overseas, created a cauldron of anger and mistrust.

From the start of the war, Canadians feared the unknown. Rumours and tales of cross-border invasions from German-Americans were furthered by several early terrorist attacks by German sympathisers against canals and buildings. These plots were mere pinpricks against the Canadian economy, but they incited fear and a desire for revenge. The search for spies and saboteurs extended throughout the war and led to much suspicion in society.

As the war deepened and the losses became more shocking, Canadians engaged in nearly unlimited patriotic work in support of the soldiers overseas. Dissent was stifled in this hyper-patriotic environment. In such a climate, it was dangerous to voice opinion against the war. Millman offers new evidence of the draconian powers of the state that eventually prosecuted at least 24,000 Canadians in wartime political trials. This is quite remarkable and Millman notes that Canada had a far more repressive state system than that of Britain, and with a more punitive justice system. Nonetheless, some spoke out against the war, and Millman dissects how Ottawa used censorship to muzzle most voices or why organised labour was largely ineffective in having an impact on wartime policy. At the same time, with most of the churches supporting the war effort, the traditional voice of peace, compromise, or moderation was quieted.

The extremity of the war effort, which called for citizens to sacrifice and bear tremendous burdens, led to polarisation. Those who were perceived as not doing their bit—new Canadians and French Canadians especially—were singled out for condemnation. The strain of the war, as Millman writes, accentuated “existing enmities” (p. 57). The need for more men overseas and the Borden government’s eventual passing of conscription legislation became a focal point of anger and divisiveness. Even before that, newly enlisted soldiers and wounded returned men from the front had been agitating for more support overseas, assaulting new Canadians in the name of patriotically stamping out cancerous dissenters in the midst of society, and even embarking on some high profile riots.

The French-English animosity is an obvious focal point in a book that explores the clash of visions over the war and Millman expertly draws out key opposition to conscription and the Military Service Act in the summer of 1917. Nearly nightly gatherings of thousands in Montréal throughout the summer of 1917 led to much antagonism towards Ottawa, public calls to assassinate Borden, the destruction of property, and other acts of civil disobedience that seemed to portend the renting of the nation. This very good material is followed, unfortunately, by a weak presentation of the Easter Riots in Québec City in March-April 1918 that saw English soldiers killing French-Canadian civilians (albeit as part of a mob that had some armed agitators). This crucial event gets short shrift in the book and still awaits proper historical coverage.

Equally important is Millman’s documentation of the abuse suffered by New Canadians during the war, who were politically powerless and, with censorship, stripped of their own papers to grieve their treatment. This intercommunal violence, as Millman calls it, saw British-Canadians heap abuse upon German-, Austrian-, or Ukrainian-Canadians, boycott businesses, and eventually lead to the imprisonment of more than 8,000 in work camps. Some were sympathisers and supporters of the nations with which Canada and the British Empire were at war; others were innocent bystanders, swept up in racist or nativistic attacks against foreign-speaking ‘others.’ The relentless assaults on New Canadians by patriotic vigilantes, soldiers in Canada, and returned men from overseas reveal a violent and divided home front. The war is often portrayed as pitting English against French, but Millman’s greatest contribution in this book is drawing out the prosecution of Non-British immigrants. This is a major addition to our understanding of the home front experience and future history books will have to incorporate in Millman’s scholarship.

Millman carries his sharp analysis into the postwar years and examines the friction of returning soldiers to a society that had changed much in their absence. The war ended, but the violence and prosecution continued at home as Canada reeled in the war’s aftermath.

This is a fine book and it balances some of the heroic and nation-building literature surrounding the war, while revealing how the state suppressed dissension in the name of victory. A hundred years later, deep scars remain from Canada’s Great War.