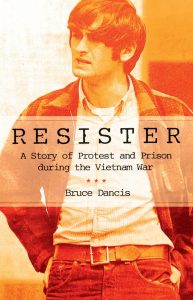 The 1960s were a time of great unrest in the United States. Minority groups became increasingly active and outspoken and protested prevailing institutional inequities and conservative mindsets that had traditionally prevented them from realising the full benefits of citizenship. A burgeoning group of white students recognised some of the same inequities in society and organised to help combat a myriad of social problems that they felt were plaguing minorities and underprivileged communities. In Resister: A Story of Protest and Prison during the Vietnam War, Bruce Dancis highlights the development of the Students for a Democratic Society (SDS) on the Cornell University campus, their work on urban housing projects, participation in the civil rights struggle, and the beginning of anti-war protests against the escalating involvement of the United States in Vietnam, which ultimately led to Dancis’ imprisonment for burning his draft card.

Bruce Dancis was part of the radical student movement at Cornell University as a member, president, and co-chairman of the campus SDS chapter (p. 3). He played an instrumental role in the development and organisation of the Cornell chapter so that, by 1968, it was one of the largest and most active chapters in the SDS nationwide. Raised in the Bronx, New York by parents who had been involved in the Young People’s Socialist League and the War Resisters League, as well as several labour unions and socialist societies, Dancis’ radical education was ensured from a young age. At fifteen, he participated in the March on Washington for Jobs and Freedom. From there, his revolutionary zeal blossomed. His experiences with anti-Semitism and racial prejudice in the Parkchester apartment complex he grew up in provided the catalyst for his interest and involvement in matters of civil rights and, by 1964, he contemplated joining the Summer of Freedom sponsored by the Student Nonviolent Coordinating Committee (SNCC) to help African Americans in the South register to vote.

Despite having a radical background, Dancis informs his readers that he entered Cornell University in 1965 as a typical college student who was interested in sports and folk music. Resister, however, is a story of his path toward protesting the war in Vietnam by burning his draft card and spending eighteen months in a federal prison. One of the particular strengths of Dancis’ book is his ability to illuminate his path from being a typical college student to the national symbol for draft resistance. Awakened by the very shocking deaths of Norman Morrison and Roger LaPorte—the former a Quaker and the latter a Catholic pacifist—who burned themselves to death as public displays against the Vietnam War, Dancis joined a small group of students led by Tom Bell that formed the Cornell SDS chapter (p. 41). Impressed by the SDS’s commitment to activism and the multi-issue perspective espoused in their founding document, the Port Huron Statement, Dancis joined his comrades in protesting local service offices and educating the Cornell community on the human costs of war.

Working his way through his continued path of resistance, Dancis not only informs readers of his own experience within the anti-war movement, but also provides valuable context for understanding the tumultuous period colloquially referred to as the sixties. His reflections on working with SNCC, the emerging ideology within the SDS, and fear of government reprisal for his public display of resistance while burning his draft card, all serve to highlight the increasingly tense sociopolitical climate present in the United States at the height of American involvement in Vietnam. The evolution of his politicisation, including his trip to meet with North Vietnamese leaders, is indicative of the revolutionary attitudes that transformed the SDS in future years, and ultimately led to more questionable methods of protest. These personal experiences found in his memoir provide more detail than the general scholarship dealing with the sixties, such as Alexander Bloom and Wini Breines’ “Takin’ it to the Streets”: A Sixties Reader and Maurice Isserman and Michael Kazin’s America Divided: The Civil War of the 1960s.[1] While these secondary sources provide context on the development of New Left ideology, Dancis is able to take readers into the revolutionary mindset of the time and the disillusionment that the SDS youth felt toward the government.

Dancis’ continues to demonstrate a unique ability to project the evolution of the anti-war movement, while simultaneously analysing the growing civil rights movement. Moreover, he maintains a continued interest in promoting social equality. While the Civil Rights Act of 1964 and the Voting Rights Act of 1965 occurred prior to his time at Cornell and the SDS, Dancis remained steadfast in his mission to combat social problems like urban housing in surrounding communities and the promotion of a more diverse student body at Cornell. Throughout his text, he constantly grapples with the difference between socialism and communism, usually against the backdrop of his personal feelings about the political views of his parents. He also highlights the early education many SDSers received from volunteering to work with SNCC, and the later rejection by the same organisation when it was felt that an all-black organisation would serve them further in their struggle for equality. Lastly, although admitting that he was not a devout Jew, Dancis highlights some of the similar prejudices that affected the Jewish population, and how his distaste for prejudice toward any group continued to grow alongside his determination to organise the world around him into a more equitable society where the only thing people fought for were their rights.

Given that Resister is a firsthand account of Bruce Dancis’ experiences in the New Left Movement, it is a valuable primary source on the early years of anti-war protest, before the SDS split and the Weathermen faction took control of the movement. Although it serves as a valuable historical tool, its contents and style will appeal to casual readers as well. Dancis displays a strong ability to deliver his stories. His fear of what to expect in federal prison and indeed the portion of the story where he is incarcerated will also cater to a wide readership, as will his descriptions of prejudice in working-class neighbourhoods and the civil rights movement. The constant worry over the government response to his actions, coupled with the story of his commitment to flout authority and continue his protest against social injustice, will also interest a large audience. Resister is highly recommended for any student of the sixties as both a primary source and as a springboard for more focused study on topics alluded to above, to governments wishing to understand how grassroots political dissent is born and cultivated, and to anyone looking for a good story.