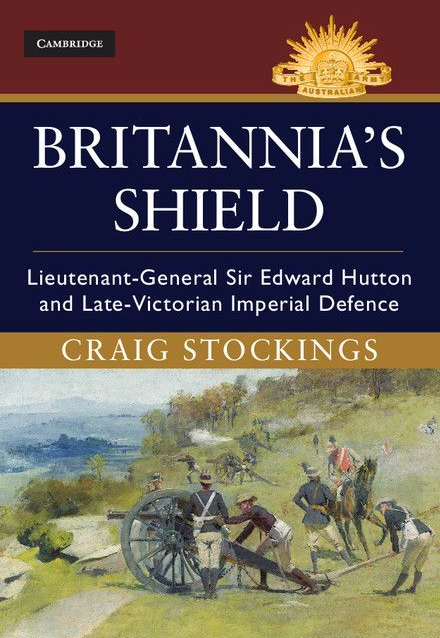 Was General Hutton, General Officer Commanding (GOC) of the Canadian Militia, 1898-1900, a political “Trojan horse” sent to Canada by British Colonial Secretary Joseph Chamberlain, intent on dragging the Dominion into imperial military commitments overseas? Was his mission to work alongside Governor General Lord Minto to prepare the Canadian Militia so it might serve, on demand, as part of a British Imperial Army? These are questions that Australian military historian Craig Stockings examines intensively in Britannia’s Shield. They are significant for both Canadians and Australians, whose countries both faced the challenge of developing a national army under British leadership at the turn of the century. Stockings explains why earlier historians, governments, public, and press have often believed a conspiracy existed among British military and colonial officials who planned to raise a force in the self-governing dominions to serve as an adjunct to British troops and help to bolster the Empire’s strength against rising European threats. After sifting through policy documents, correspondence, meeting minutes and reports arising from Hutton’s military service in Australia, Canada, and South Africa, Stockings firmly rejects the concept of a Chamberlain-Hutton-Minto conspiracy that was intended to dupe colonial officials into accepting a combined Imperial military force, including the one that Canada sent overseas during the South African War of 1899-1902.

The resulting book is a well-researched and balanced examination of General Hutton’s career. Britannia’s Shield solidly establishes the context behind Britain’s imperial-colonial military relations in the years leading up to the First World War. Stockings shows the emergence of legislation in 1904 to establish a Canadian “national army” as being largely a result of Hutton’s personal contributions, rather than a victory over Imperial aims. He regards Hutton’s career as an instructive reflection of the times, one that sheds light on late-Victorian thinking on the role of land defence forces within the British Empire and the embryonic structures of imperial military policy in the dominions. Throughout the book, Stockings represents “imperialism” as a type of Empire-wide nationalism, rather than a tool of economic, political, or military control. Hutton, by this view, becomes an ideal case study reflecting the philosophies and practicalities of the debates over imperial defence. Hutton brought unique expertise to his role as General Officer Commanding the Canadian Militia: he had previously led the New South Wales colonial forces, was a creator of the post-Federation Australian Army, and had fought in four expeditionary British wars. In the South African War, his command consisted of a mounted infantry brigade that included troops from Britain, Australia, New Zealand, and Canada. His vision was not one in which colonial troops were to be subsumed in an imperial force, but rather that of self-governing dominions building up their own national militias to come to the aid of the Empire when their own governments decided upon such action.

In his discussion of the “Trojan-horse” theory among noted historians of Canadian history, Stockings identifies Carman Miller, Desmond Morton, and Richard Preston as key proponents (pp. 168, 302). Stockings states that to Miller (The Canadian Career of the Fourth Earl of Minto),[1] Hutton was little more than a “perfidious agent of Empire” running a simple program of military imperialism. To Morton (Ministers and Generals),[2] Hutton is a villain, an agent of British policy, and a puppet of Chamberlain sent to Canada for the purpose of re-establishing British influence in Canadian military affairs. Further, Stockings examines Preston’s argument that for Hutton, the militia was never a Canadian organization but a district of the British military command system (Canada and ‘Imperial Defense’).[3] The result is a valuable and eye-opening treatment of his place in the history of Canada’s contribution to the Boer War.

Stockings contends that the incident initiating suspicions of Hutton’s backroom plotting was the premature release of an announcement on 3 October 1899 in the Canadian Military Gazette that Canada would send a contingent to the South African War, even though the Laurier government had not yet passed such a motion. Prime Minister Wilfrid Laurier and his Cabinet suspected that Hutton was behind the press release, which they viewed as an effort to force the government’s hand in contributing to the war. They knew the published memo outlined a contingent identical to plans for an infantry unit of 1209 men that Hutton had drawn up at Minto’s suggestion weeks earlier. Stockings points out: “The coincidence seemed more than suspicious; it smelled like a conspiracy.” He believes, however, that even the overconfident Hutton was too intelligent to so blatantly breach the barrier between political and military authority. Definitive proof has not been uncovered, and Stockings continues: “Nonetheless, appearances and passions, at this heated moment in Canadian political history, well and truly trumped balanced analysis. Hutton was in trouble” (p. 181).

A series of disputes over the next few months between Hutton and Minister of Militia Frederick Borden, and ultimately the entire Laurier Cabinet, led to Hutton’s dismissal as GOC. His arrogance during the crisis, his appeals to the popular press to force Laurier into an imperial commitment, and constant speech-making on matters that were seen as the territory of government authorities ultimately led to Hutton being accused of “every kind of Machiavellian plot” to draw Canada into the South African War (p. 196). However, Stockings contends that Hutton’s personal role and influence in bringing Canada into the war was, in reality, much less than either he or his subsequent critics would have it (p. 197). Ultimately, it was the enthusiasm of imperialist support in populous Ontario that swayed Laurier’s decision. With intricate detail, Stockings shows that there was no betrayal of Canadian interests and no imperial plotting. The British War Office had no such plans in place, there was no overarching unity of thought on imperial defence, and no hidden masters urging Hutton onward (p. 255).

A major highlight of Britannia’s Shield is found in its wide array of multinational archival sources. In particular, the Hutton Papers feature voluminous correspondence with British military and War Office officials that serve as a revealing lens through which to investigate imperial defence, alongside Hutton’s personal role within the evolving  movement. Stockings reveals that, in contrast to correspondence and reports, Hutton’s memoirs were “frustrating” to work with (p. 7), and perhaps this explains why all endnote references to “Memoirs” have no date included.  An interesting follow-up piece would more closely identify the date of memoir entries, comparing Hutton’s actual moments of “up-to-the-neck” trouble making and his (sometimes) more mature assessment of the events that was written years later. Both sources are self-aggrandizing and overestimate his impact on military effectiveness, none more so than his hindsight-inspired claim of 1916 in which he saw his scheme of cooperative imperial defence  “bearing rich and lasting fruit – not only for giving us victory over our German foe, but by consolidation of the Empire as its final result”  (p. 280).

Certainly, Hutton made significant reforms to the Canadian and Australian military forces in terms of the creation of national armies, and to British attitudes toward the benefits of mounted infantry. Canadian readers of Stockings’ work may find his portrayal of Hutton’s role to be overstated, in that it largely ignores the role of Minister of Militia Frederick Borden in bringing about vital reform of the Canadian Militia. Hutton’s  inability to work with others, particularly politicians, often overshadowed his military brilliance and ultimately forced the War Office to recall him from three overseas postings as GOC. Blind to the human aspect of his work, particularly in relation to the politicians who were, indeed, his employers, Hutton’s boundless energy, speech-making, and newspaper releases began to work against him. However, as Stockings notes, “His busy pen was never indicative of personal or imperial scheming” (p. 256). The result is a well-researched and authoritative account of a key figure in the history of Canadian and imperial military development at the turn of the twentieth-century, and an essential contribution to our understanding of the events that led to a Canadian expeditionary force being sent to the South African War.