Review of David James Gill’s Britain and the Bomb by Joseph A. Buscemi 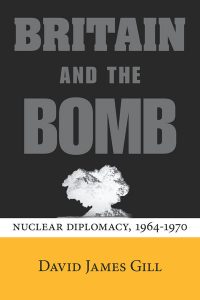 By Joseph A. Buscemi, University of Waterloo

Compared to the others with seats at the nuclear table, Britain’s status as a nuclear power has often been scrutinised in a curious manner. As other nations gained power and influence following the Second World War, Britain’s empire was in an obvious decline. Even so, Britain clung to relevance on the global stage as a second-tier power below the superpowers. The price of admittance to this tier was an expensive nuclear programme, one that was growing increasingly hard to sustain due to commitments to the welfare-state and decolonisation. For decades academics have questioned the existence of Britain’s nuclear programme with theories focusing on images of national pride, Cold War strategies and military logistics. However, as David James Gill, an associate professor in the School of Politics and International Relations at the University of Nottingham, argues, “the reality of nuclear weapons in British history [is] far more mundane” (p. 12). Gill is part of a small yet growing group of historians focusing on Britain’s struggling post-war economy as a practical answer to the question of Britain’s continued commitment to nuclear weapons, with Britain seeing it as “a way to reduce the financial burden of conventional forces” (p. 23). The usage of the incredibly expensive programme as a way to save costs seems paradoxical yet Gill’s text provides an intriguing explanation, asserting that the expensive deterrent was believed to be cheaper than its equivalent in conventional forces.

Gill’s monograph, Britain and the Bomb: Nuclear Diplomacy 1964-1970, provides a detailed study of Prime Minister Harold Wilson’s first government (1964-1970), as well as a satisfying account of Britain’s nuclear programme from its origins to the Chevaline/Super Antelope debate following Wilson’s second government (1974-1976). Through Gill’s thorough grasp of economics and politics, the six years of Wilson’s first government are revealed as a monumental balancing act with Wilson committing to an expensive nuclear deterrent in times of economic crisis. Gill follows the economic realities of the nuclear programme in a captivating manner, depicting Wilson’s first government as a pivotal era in which Britain’s nuclear programme teetered on the edge of cancellation. These often unconsidered financial debates quickly reveal that “economic difficulties were not limited to communist countries. Destabilising crises troubled successive British governments. Had the [1970’s] gold crisis worsened, it is likely Wilson would have conceded cancellation [of the bomb]” (p. 204). These and other turning points in British military history, such as the 1968 announcement of the removal of troops east of the Suez Canal, are dutifully recounted throughout the text.

Gill’s thesis is convincingly argued through four broad themes, the first being a detailed account of the post-war British economy and the fascinating way Britain’s nuclear programme oscillated between cancellation and continued investment as “the British bomb was a diplomatic and economic tool as much as a strategic or military weapon” (p. 33). Even those familiar with modern British military history may be surprised to see how close the nuclear programme came to an end under Wilson’s government. A second theme is the British government’s continued flirtation with possible nuclear sharing arrangements such as the Multilateral Force, the Atlantic Nuclear Force and the Polaris programme as “a lever to prise dollars from the US Treasury to bail out the British economy” (p. 85). The British desire to maintain an independent deterrent while requiring much needed contributions from the United States adds yet another layer of complication to an already strained government. Similarly, Gill argues a third theme, chronicling Britain’s consideration of disarmament to improve their chances of joining the European Economic Community (EEC) which demonstrates that “[Wilson] was an economist before a diplomat” (p. 33). In the wake of Brexit, reading the numerous stratagems that Britain deployed to maintain their nuclear programme while maneuvering themselves into the EEC provide fascinating and politically relevant reading today. Lastly, British historians will be familiar with the theory of political consensus that supported Britain’s commitment to the post-war welfare state. Gill’s fourth theme explores another consensus, the lengthy bipartisan consensus to maintain the nuclear deterrent, and how Wilson’s machinations in the Labour party “obscured fundamental similarities with Conservative nuclear policy” (p. 105).

Gill’s economic focus is an important contribution to the multitude of texts exploring Britain’s commitment to nuclear weapons and his usage of primary economic sources and secondary works should by all accounts be considered a success. Peter Hennessey is an eminent writer on the history of Britain’s nuclear programme and Gill uses several of his works to a great extent, adding an important—and necessary—layer of economics to the historiography.[1] Articles by Matthew Grant and Kristen Stoddart, both influential British nuclear historians, are also well used, though Grant’s similarly themed 2010 book, After the Bomb, which explores budget cuts and the nuclear programme, is oddly absent from Gill’s bibliography.[2] As Gill argues, “a commitment to investment in nuclear weapons therefore not only reduced the available defence budget but also encouraged further cuts” (p. 137). These “further cuts” are hinted towards but left unfortunately unexplored, particularly the culture surrounding the shrinking civil defence programmes and the resulting reverberations in the British population. For those curious about the discourse between the public and the government’s dwindling civil defence measures, such as the Protect and Survive programme which was started during Wilson’s second government, a 2012 article from James Stafford titled “‘Stay at Home’: The Politics of Nuclear Civil Defence, 1968-83” provides complementary reading to Britain and the Bomb.[3]

For those interested in similar recent texts, Jonathan Hogg’s 2016 book, British Nuclear Culture: Official and Unofficial Narratives in the Long 20th Century, can further serve those intrigued by the economics of Britain’s nuclear deterrent while also providing a captivating examination of concepts of nuclear culture in British society—which both welcomed and protested Britain’s nuclear programme.[4] Gill’s book is a dense but jargon-free review of the economics of a turbulent time in British history that should serve any academic interested in nuclear or Wilsonian politics and economics. Ultimately, the reader finds satisfaction with Gill’s text as well as his central thesis that “nuclear history is a […] complicated process, influenced by economics and politics, as well as diplomacy and strategy” (p. 3).

[1] Hennessy’s The Secret State: Preparing For The Worst 1945-2010 (London: Penguin UK, 2014) is required reading for any modern Britain historian and his Cabinets and the Bomb (Oxford: Oxford University Press/British Academy, 2007) should be considered the same.