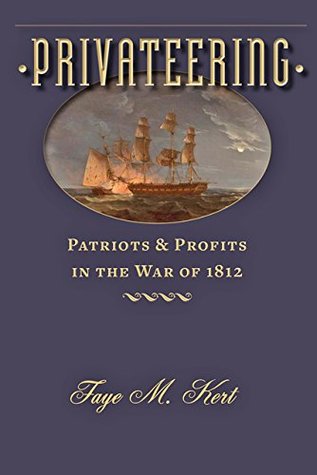 In recent years, historical work on the nature of the public-private partnership underpinning the fiscal-military state, and the role of merchant-contractors within it, have reached such a pitch that the term ‘the Contractor State’ has emerged as a scholarly concept. Privateering has received rather less attention. It is the purpose of Faye M. Kert’s Privateering: Patriots and Profits in the War of 1812 to remedy this deficiency. By examining the legal and political infrastructure and the economic imperatives and incentives behind privateering operations, Kert’s work complements recent research into the close and often militarily vital links between commercial activities and military operations. Drawing on a wide range of material, albeit with justifiable emphasis towards North American archives, Kert includes detailed geographic data on private vessels and number of prizes in the appendix and the bibliographical ‘Essay on Sources’ accompanying each chapter testifies to the rigor, breadth and depth of scholarship. A prodigious body of empirical research is distilled into a concise and pointed account that will appeal to scholars, military professionals, and educated laymen alike (pp. 191-8).

The book is a lively account of an under-researched topic. In a field dominated by voluminous histories of naval battles, Grand Strategy, and the impact of new technology, privateering has often appeared as a sideshow to more important themes and events. Recent work on Salem indicates that belated attention is now being paid to it, albeit from slightly outside established scholarly circles.  The author has previously written about the inter-related mercantile communities of Canadian colonial privateers and her scholarly credentials are fully displayed by her carefully plotted account, underscored by crisp, clear prose and rigorous analysis. Six concise chapters examining different aspects of privateering during the war are book-ended by a commendably brief but incisive introduction and conclusion locating the subject within the wider history of the war. The divisions and rivalries between American states and their diverse geo-political and economic objectives provide important historical context allowing for measured evaluation of the granular detail of privateering operations. The legal, ethical, and philosophical framework is well drawn, accompanied by coherent and often colourful descriptions, though Kert commendably resists the temptation to romanticise her subject.

Privateering was a wartime activity with medieval antecedents, created and legally sanctioned by maritime states to protect and defend commerce from enemy attack. It was initiated by a declaration of war followed by a Prize Act. A Letter of Marque, effectively a governmental licence, differentiated privateering from piracy, its disreputable and unruly relation, in stipulating ships were to be legally “subdued, seized and taken”. As a temporary economic weapon privateering was deceptively anarchic, and was in fact highly-regulated and prescribed by international law. The evolution of its legal and operational infrastructure was accompanied by theoretical justification with writers such as Vattel accepting that warring nations had the right to deprive their enemies of the means of waging war. Yet privateering sat uneasily alongside the rights of neutral states. The age-old debate on neutral versus belligerent rights assumed particular importance for the United States during the Revolutionary and Napoleonic wars, with British Orders-in-Council, legislative acts restraining international trade, and a constant threat to neutral shipping. While extolling the orthodox view that with repeal of the legislation, the 1812 war was an “unnecessary conflict” Kert correctly holds that the rationale for the war in American minds, exorcised by commercial restraints and naval impressment, of ‘Free Trade and Sailors’ Rights’ was a powerful one.

By the late eighteenth and early nineteenth century, the capability of privateers was arguably greater, for larger armed forces not only meant greater military capability and strength but increased vulnerability. In 1812, the scale and scope of privateering was indeed impressive. Both sides inflicted and suffered losses but with 638 American privateers, mostly operating out of Massachusetts, Maryland, New York, and Maine, against 45 British privateers, mostly from Nova Scotia and New Brunswick, Britain faced potentially catastrophic losses. Presciently predicting the nature and course of the war, Thomas Jefferson stated in August 1812 that Britain’s fleet would “annihilate our public force on the water, but our privateers will eat out the vitals of their commerce” (p. 70). Kert demonstrates the weaknesses for a commercial nation conducting a maritime war, with extensive British losses reflected in insurance rates 30 percent higher in 1815 than in 1812 (p. 15). Equally, despite the cost of converting merchant ships into privateers the prospect of potential gains appear to have been worth the risk for many ship-owners, investors, and crew. Privateering required an intricate legal and administrative structure consisting of multiple officials and jurisdictions in adjudicating and presiding over prize claims. Revenue duties and legal costs diminished profit margins but Kert convincingly demonstrates that prize capture remained profitable especially early in the war.

The damage American privateers inflicted on British commerce was not sustained, for the naval blockade of New England in early 1813 and compulsory convoys curbed early successes and halted American maritime traffic. The hordes of privateers at sea during the first six months of the war steadily dwindled thereafter. Privateering was only viable so long as there were ships to capture and money to be made, and the clear corollary between perceptions of profitability and number of active privateers underlines the view that profit generally trumped patriotism, and as the war developed “the combined risk of physical and financial loss proved a powerful deterrent” (p. 110). Only 16 of 600 American vessels renewed their commissions throughout 1812-1814. The ideal scenario of swift, non-violent capture by a larger force with easily achieved gains was atypical. Only a handful made fortunes; thousands more ended up injured, imprisoned, or dead. The vicissitudes of privateering, including accidents, disease, incompetence, ill-discipline, and insubordination all impinged on operations, and successful vessels and crew faced a constant threat of capture, destruction, and ruin.

The complexity of the subject often means that broad generalities are fraught with difficulty. For example, the strategic value of privateering is difficult to ascertain and Kert provides somewhat contradictory evidence. The absence of coordination with the Navy limited the strategic importance of privateering but seizure of goods always had the potential to undermine the enemy, and was a powerful and legitimate weapon against a commercial nation. The capture of a British transport ship in 1814 loaded with military items intended for the British fleet at Lake Ontario was a case in point, representing “a major setback for the British war effort on the Great Lakes” (p. 133). Kert’s argument that privateer activity helped convince Britain that war was too costly is underpinned by the reasonable assumption that the small US navy would not have been able to prolong the war “had privateers not kept the war at sea alive” (p. 147). Yet Kert concedes that while episodically significant, the overall strategic value of privateering was highly-variable and somewhat limited. Indeed, the commercial and strategic imperatives could work the other way, with the search for profits leading to extensive smuggling, and American merchants seizing the opportunity to supply British troops during the Peninsular War.

While somewhat implicit within the text, Kert may have considered privateering more closely alongside elements of ‘informal’ warfare. Recent work on logistics and provisioning has demonstrated the importance of non-military actors towards military operations. With a clearer understanding of the multi-faceted relationship between mercantile activity, in its many guises, and warfare, the ‘business of war’ has never been more pronounced in historical scholarship. Despite this conceptual omission, by offering new insights based on meticulous research, Kert convincingly accords long-overdue recognition and commensurate historical significance to her subject as a vital element of military activity in the war of 1812. Privateering appears in the guise of innovative entrepreneurship, albeit of an unpredictable, dangerous and potentially violent and destructive character. While the insightful biographical aspects may have been taken even further, the importance of human agency is forcefully and convincingly reiterated. In that sense, the book complements recent work on the economics of warfare in acknowledging the intricate blend of public and private interests, in addition to and alongside regular armies and navies, of militarized societies at war in the eighteenth and nineteenth centuries.[1] More broadly, the role of the Canadian dimension of the war in forging future Canadian identity ensures that the work is an important addition to existing literature on the historical legacy of warfare and the continuing reverberations of the 1812 war in the popular consciousness of Canada’s ‘collective memory’.