Review of Forgotten Trials of the Holocaust by Katelyn Arac 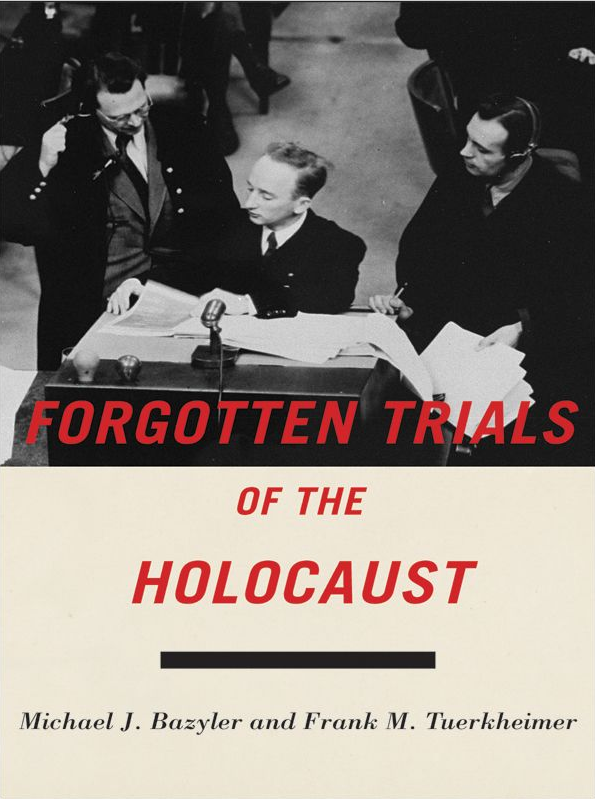 Most people have heard of the Holocaust perpetrated against Jewish people during the Second World War. Many have heard of the noteworthy trials against the high-ranking officials and collaborators of the Nazi regime, including the Nuremberg trials conducted by Allied officials from 1945-1946 and the Eichmann trial held in Jerusalem in 1961. What few people realize is that there were many trials to persecute Nazis and collaborators for the atrocities committed during the Second World War. Bazyler and Tuerkheimer seek to address this gap of knowledge in their book Forgotten Trials of the Holocaust. In an attempt to “undo some of that forgetfulness” (p. 7), Bazyler and Tuerkheimer examine ten trials held in different countries against defendants from various levels in the Nazi hierarchy. From the first trial conducted in the Soviet Union in 1943 to the 1999 British trial against Anthony Sawoniuk, this book takes an exhaustive look at the legal aspects of various cases to determine how justice has been dispensed towards perpetrators of war crimes and genocide.

By examining legal processes, the judicial ramifications of sentencing, and the outcome of the ten cases, Bazyler and Tuerkheimer provide an in-depth portrayal of some of the more obscure trials of the Holocaust. Their attempt to re-educate the general public and scholars alike on the various types of trials against perpetrators of the Holocaust is a success. The book provides an eloquent summary of ten different cases that occurred over several decades and in various countries. In their examination of the cases three themes are clear: the prosecutors of each case were strongly committed to justice; the defendants in each case did not deny the facts of the Holocaust; and the defense counsel provided a fair and robust defense of their clients, in almost all cases. By focusing on these themes, Bazyler and Tuerkheimer express their hope that the book encourages the dispersal of knowledge about the Holocaust so it is not forgotten and that such crimes continue to be brought to justice.

Forgotten Trials of the Holocaust looks at ten specific trials that have occurred over the last seventy years. By analyzing these trials together, a comprehensive picture emerges of the efforts to prosecute those responsible for the murder of Jews during the Second World War. Beginning with the Kharkov trial conducted by the Soviet Union in 1943, Bazyler and Tuerkheimer show how legal proceedings were used as an extension of political power. The Kharkov trial was convened with the aim to speak specifically to (1) a domestic audience, (2) an international audience of the British and American allies, and (3) for Germany, the enemy. Various aspects of the trial are presented to show that the Soviets were keen to prosecute war crimes, even through the use of Western-style legal proceedings. The Kharkov trial had one blatant omission in its proceedings: the mention of Jews. This early trial did not use the dialogue we utilize today; there was no discussion that the major target of the Nazi regime was the Jews of Europe. Instead, the murder victims were called Soviet citizens and civilians.

While the trials discussed in the book do mention other peoples targeted by the Holocaust, it is obvious that Bazyler and Tuerkheimer’s focus is on the Jewish victims. Further chapters also emphasize the importance of fairness within the legal proceedings. Each case had legal problems associated with way in which the trial proceeded. The United States Army’s Dachau trials followed official courtroom rules; however, it was impossible for three attorneys to properly represent forty defendants. In the Polish trial against Amon Göth, the infamous commandant of the Plaszów concentration camp, inadequate legal counsel being provided to the defendant marred the proceedings. Regardless of any genuine effort to deliver justice, Bazyler and Tuerkheimer stress the importance of objectivity in the legal proceedings.

Various chapters examine the evolution of public memory and the impact of legal proceedings. Bazyler and Tuerkheimer demonstrate in several chapters that the use of the terms genocide and holocaust in the trials have helped integrate those terms into our consciousness. The language used in the trials shifted towards acknowledgment that many of the victims were Jewish and were specifically targeted by the Nazi regime. The book also demonstrates how trials were specifically tied to political motives and practices. In several chapters, Bazyler and Tuerkheimer indicate the problems in the link between politics and legal practices in a discussion on the British and American release of Nazi prisoners. They question how justice was served during the release of these prisoners and conclude that justice was not served by negating the standard sentences received by various defendants.

Methodologically Bazyler and Tuerkheimer cover trials that span over half a century. This allows them to track the shifts in legal practice towards Nazi crimes. By looking at trials that encompass various national courts alongside different temporal periods, the book reminds the reader that the process of justice is ongoing and constantly in flux. By including trials that span not only time but also a diverse set of defendants the book meets its objective to “present a vertical picture of the detailed operation of the conspiracy to murder that (1) Hitler, Himmler, and Goring initiated, (2) Eichmann coordinated, and (3) many hundreds of thousands of Germans, Austrians, and others implemented” (p. 7).

In corroboration with the overarching themes of remembrance and the evolution of justice, Bazyler and Tuerkheimer use a variety of sources in each chapter. By using various important secondary works and primary documents each trial is well researched and the legal processes are fully documented. Though much more could be written about each trial presented in the book, a compilation such as this becomes an important addition to the historiography of the trials of the Holocaust. Works such as Hannah Arendt’s Eichmann in Jerusalem (1977) and Joe Heydecker’s The Nuremberg Trial (1962) have provided great insight into the two trials most well known for prosecuting Nazi war criminals. Other books, like Rebecca Wittman’s Beyond Justice: The Auschwitz Trial (2005), Patrick Brode’s Casual Slaughters and Accidental Judgements: Canadian War Crimes Prosecutions 1944-1948 (1997) and Allan Ryan’s Quiet Neighbors: Prosecuting Nazi War Criminals in America (1984) attempt to demonstrate the lesser known trials after the Second World War and the continued search for war criminals. Bazyler and Tuerkheimer’s book addresses a gap in the current literature by providing a book that encompasses the major themes from ten different trials. Few works have focused on the overarching impacts of the various Holocaust trials, so this book provides the missing piece.

Bazyler and Tuerkheimer succeed in presenting a set of trials that survey the pattern of justice used to try defendants for crimes committed under the Nazi regime. From the first trial in Kharkov to the last in an English courtroom in 1999, justice is shown to be an ever-evolving process. Overall, Forgotten Trials of the Holocaust is an important read for anyone wanting to familiarize themselves with the judicial proceedings against Nazi crimes.