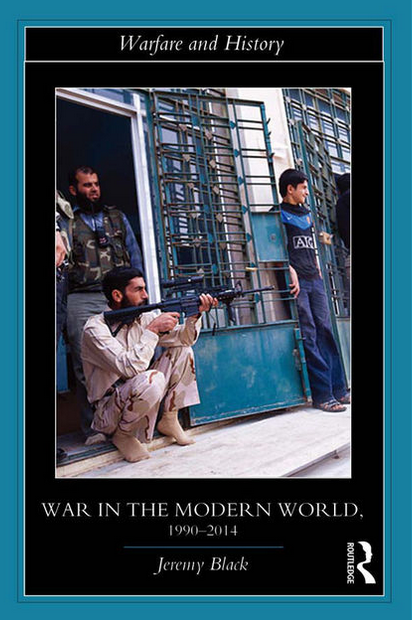 Despite the immense tension between the Soviet Union and the United States during the Cold War, the period was ultimately defined as a delicate balancing act between major powers. Cold War conflicts were proxy wars that served as a balancing measure between the two major powers. The collapse of the Soviet Union in 1991created a power vacuum that the United States alone was not able to fill. The 1990s thus represent a period of major transition and reassessment for major military forces, and of conflicts that took advantage of the newly-formed vacuum.

In the years following the collapse of the Soviet Union, a tremendous body of literature on the Cold War period has been written. Of particular emphasis in this literature is the United Nation’s shift towards peacekeeping operations and different military alliances, such as NATO focus on anti-insurgency measures. British military historian Jeremy Black’s War in the Modern World, 1990-2014 offers unique insight into the differing conflicts that have emerged after the collapse of the Soviet Union. Black’s work relies upon the central premise that war in a post-Soviet environment is an inevitable byproduct of a collapsing power. He strongly emphasizes that war is a fundamental part of modernity, and that different conflicts arise as a response to the power vacuum left by the Soviet collapse. The conflicts that arose in the 1990s and 2000s were products of continuing advancements among different nations; advancements, which, in part, were responses to the collapse of the Soviet Union. Black also examines how the actions of individual groups such as Boko Haram and Jabhat Al Nusra, which are Islamic extremists groups that operate in Nigeria and Syria respectively, are responses to localised conditions, and the greater implications of these groups’ actions. Such groups appear in response to new instabilities, and play a role in defining modern stability.

This book successfully emphasises deontology in its examination of modern conflict. Rather than presenting history as a sequence of events that culminate into a specific “end” event, such as the lead-up to the 9/11 terrorist attacks, Black presents differing conflicts as independent timelines that intersect at differing points. A wide range of perspectives are illustrated, which helps avoid the issue of an excessively European or American-centric dialogue, and the book highlights how these different perspectives influence one another. One example is the utilisation of asymmetrical warfare in the Middle East. Early in the book, the author emphasises how conventional warfare was an unsuccessful strategy for Iraq; the Iran-Iraq war was an eight-year war of attrition, and the First Gulf War resulted in a landslide victory against the Iraqi army. The success of asymmetrical warfare in the Soviet-Afghan War and of different factions in Somalia was a strong contrast to unsuccessful conventional stratagems, and this set the precedent for the utilisation of asymmetrical tactics in the Iraq invasion in 2003. At no point does the book state that any series of events inevitably leads to future events; events are presented as a dynamic web of decisions made over a long period of time that influences modern decision making. Military leaders such as General Izzat Ibrahim al-Douri made the conscious decision to change their strategy after observing a series of external conflicts and their results; if conventional warfare failed against the United States and asymmetrical warfare succeeded against the Soviets, then it would be logical to shift towards asymmetrical warfare. Other case studies covering different parts of the world and different regions are more thoroughly explored in War in the Modern World.

The way nations respond to the power vacuum left by the collapse of the Soviet Union also partly reflects nation’s cultural values and technological capabilities. A population’s cultural values cannot be ignored because it is in part an individual’s cultural values that helps determine whether or not conflict will occur. Conflicts between Tutsi and Hutu peoples in Rwanda in the 1990s, and the major ethnic conflicts in the Solomon Islands in 2000; both cases saw clashing identities escalate into major conflicts and, in the case of Rwanda, genocide. A case of how technological advancement affects modern warfare is forwarded early in the book in context of how effective American tank crews were against their Iraqi counterparts. The argument cited here is that advancements in weaponry, such as improved one-hit kill capacity and improved communication with air units, allowed for a landslide victory during Operation Desert Storm. This would later set further precedence for asymmetrical warfare, since it became clear that conventional warfare would be an ineffective strategy against a force such as the American Armed Forces since no existing adversaries could match the United States in technological capacity.

The material covered in the book is wide reaching, and Black is blunt in the way that he conveys information. Rather than obfuscating his arguments behind politically-driven language, Black utilises clear, precise language for different groups and actions. This book does not soften its language or alter its terminology for different groups; rather, Black utilises cold, hard terms. Such honesty allows for sophisticated analysis of events that currently reside within the confines of modern memory. Combined with Black’s deontological approach, the precise language allows for a more accessible, less-biased study of modern warfare.

The book is not perfect, however. The author’s decision to minimise long-term historical contextualisation is a limitation that might hinder the casual reader of military history. Unless the reader is intimately familiar with twentieth century military history, he or she will find the book difficult to understand. This book is therefore recommended to academics and students (graduate or upper-undergraduate) that specialize in twentieth century political history and modern military history, as most other audiences cannot be guaranteed to have the necessary pre-requisite knowledge.

The reliability of some of the material that Black relies on is a limitation. Some statistics are left without adequate reference, which at times result in unfounded assertions. For instance, Black’s first footnote for chapter four, which discusses the fatalities involved with the 9/11 terrorist attack. The endnote next to the death toll, leads to an incomplete citation. Simultaneously, the same footnote states that, “possibly 30,000 in total, would have been killed” (p. 80) had there been no rescue efforts in the twin towers. There is no justification for the inclusion of this figure, particularly when the finite death toll that is listed without an adequate source. Similar omissions occur throughout the book, such as with the statement that Russian military expenditure increased by 26 per cent in 2013 (p. 112) and that Russian forces drove two-hundred thousand Georgians from their homes in 2008 (p. 27). Assertions are also made by using vague language that are left unsupported, such as with the statement that weapon availability “can be linked to threats to threats to political and social stability” (p. 99). Or that “American use of drone strikes played an important part in this process [of eliminating insurgency leadership]” (p. 79), which is left without a citation in the bibliography (p. 80–81). While all of these facts and statements could be accurate, they cannot be confirmed with what sources are offered in the text. This is a significant problem for future historians, who must trust Black’s authority and the accuracy of his information; if one cannot trust the foundation of Black’s arguments, the validity of his research is difficult to accept.

The extent of War in the Modern World’s practicality as a source for examining warfare from 1990 to 2014 is tied to how much researchers accept the premise of Black’s writing and how much his assertions can be verified. If the premise is that war is fundamental to modernity, or the potential issues causes by imprecise statistics, or assertions is deterrents, then this book will be of little value. If one accepts Black’s premise and can carefully verify the validity of his statistics and assertions, then this book would be an excellent reference for its theoretical framework and emphasis on interconnectivity in warfare. This book is a recommend read for a non-academic audience engaged in research.