In Maple Leaf Empire: Britain, Canada, and the Two World Wars, Jonathan F. Vance analyzes the evolution of the Canadian military from Confederation until the Second World War, how Canadians viewed themselves and their military endeavours in the name of empire, and how these conflicts transformed the imperial relationship over the course of the nineteenth and twentieth centuries. In doing so, Vance makes an important contribution to the historiographical debate on “Britishness” and the role of the British Empire in the formation of a Canadian identity. While historians writing during the era of official multiculturalism increasingly viewed “Britishness” as an exclusionary and outmoded way of interpreting Canadian history, Vance situates his study within a more recent trend of historical scholarship that revises this interpretation.[1] These scholars contend that “Britishness” and the imperial connection was instrumental in shaping Canadian politics, culture, and identity well into the twentieth century. Using the two World Wars as his primary case studies, Vance goes one step further, arguing that while Canada began as the child of the British Empire, it evolved through military engagements into an equal partner, one able to influence Britain in much the same way Britain once influenced Canada. Canadians accomplished this by establishing a “Maple Leaf Empire” in Britain during the World Wars. By interacting with and influencing British civilians while in training and on leave, and by proving their worth to senior military command, Canada’s military experience in Britain contributed significantly to the formation of its own unique identity and left an indelible mark on British society. 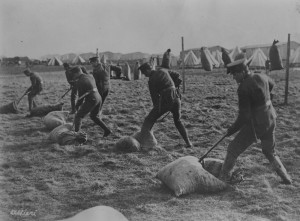 Maple Leaf Empire is organized into six chapters that cover Canada’s military experience with Britain from the colonial period to 1945. Chapter One explores how everything from culture to the economy was at least partly developed by the British military during Canada’s early history. British regulars, for instance, developed infrastructure like roads and fortifications, stimulated the economy, and contributed to the cultural growth of Canada in their spare time by creating theatre groups (p. 9). When British garrisons began to leave after Confederation, Canada was forced to create its own professional military, which marked the beginning of its move toward a separate identity. At the same time, Vance notes that Canadians were still deeply connected to the Empire – they were proud to be represented at Queen Victoria’s Jubilee, and retained British names for streets, cities, and schools (p. 33). The relationship between Canada and Britain at this point was one of parent and child (p. 25).

The next three chapters investigate Canada’s involvement in the First World War and the development of a more robust and distinct Canadian identity within the British Empire. The parent-child metaphor, Vance suggests, was evidenced in the rushed Canadian response to join Britain after the declaration of war on 4 August 1914 (p. 38-39). Indeed, the first wave of recruits were primarily British-born, but this changed later in the war as more Canadian-born men joined the ranks and went overseas. As more Canadians arrived in Britain, a process of “reverse-colonization” occurred and British citizens became influenced by the unique attitudes and behaviours of the Canadians. Although Canadians were notorious for their discipline problems, British newspapers celebrated their contributions rather than criticize them (p. 59). The military experience also fuelled Canada’s own nascent nationalism. Prime Minister Borden’s objection to splitting up Canadian units led to the eventual creation of the country’s most notable contribution to the Great War, the Canadian Corps (p.62). The success of the Canadian Corps in battles such as the Vimy Ridge and the 100 Days campaign showed the fighting merit of the Canadian men to Britain and earned them more independence and influence. Vance reaffirms the argument that the separate Canadian Corps brought Canada prestige and bolstered Canadian nationalism. As a result, many British citizens chose to immigrate to Canada after the war. He also shows that some Canadians chose to settle in Britain after the war while others, including war brides, sought a new life in Canada. While “Canadianness” was still deeply connected to Britishness and the Empire, these three chapters show how equality was developing between Canada and Britain during and after the First World War. 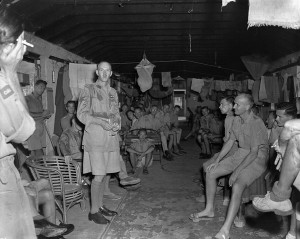 The final two chapters of Maple Leaf Empire deal with the Second World War. The lack of enthusiasm shown by Canada for the war, according to Vance, demonstrated that the nation had matured over the course of a generation; Britain did not compel Canada to join them, Canadians just knew that it was the right thing to do (p. 147). Vance devotes quite a lot of space to the efforts of the Canadian home front to support the war through charity work and donations. Canadian soldiers who went overseas to Britain found the Canadian reputation from the First World War still intact, which illustrated the continuity of Canadian influence in Britain (p. 152). Relations soured, however, as a result of Canadian inactivity in the European theatre. Canadians began to act out against the British, rioting and damaging British storefronts. Any animosity was short lived: the arrival of the American GIs who gained the infamous reputation of being “overpaid, oversexed, and over here,” played a role in pushing Canada and Britain closer together once again (p. 181). After the war, traces of Canada’s Maple Leaf Empire remained in Britain – grave sites, infrastructure, and influential Canadians all played a role in shaping postwar British society. Notwithstanding this process of reverse colonialism, Vance also contends that Canadians retained their love for Britain as well, whether it was displayed through the consumption of British products and culture, or popular interest in royal events. The familiarity that persisted, Vance suggests, was forged through shared heritage and history. At the same time, Canadian identity had evolved towards self-sufficiency. There was no more talk of the parent-child relationship.

Vance’s source base is reflective of the military dimension of his overall argument. These included soldiers’ letters, diaries, and memoirs from “The Canadian Letters and Images Project,” public archives, or private collections. While rich in detail, the scope of his evidence raises some questions about how far his argument can be extended. After all, the subjects of this study are primarily military men in a certain age bracket, the majority of whom were of Anglo-Canadian background, although at times Vance considers French Canadians, aboriginals, and other minorities. Vance’s use of letters, diaries, and memoirs offers insight into the sentiments of Canadian military men, but these sources have some limitations when used to analyze Canadian identity as a whole. Certainly, as Vance points out in his introduction, some French-Canadians and many Native-Canadians were more sympathetic to the British Crown and had their own reasons for supporting the Empire in military conflict (p. 2). But in Maple Leaf Empire Vance does not pursue this relationship and how it evolved over time – a dimension of the story that could have greatly benefited his text and overall argument. In addition, the strains brought about by the war are often underemphasized in the narrative: the focus on military experience necessarily glosses over the conflict that occurred on the home front as the result of debates over conscription, enemy aliens, gender roles, and civil re-establishment. The book thus tells us much more about the dominant or popular wartime experience and conception of Canadian identity, but less on competing or alternative histories and experiences. While a comprehensive counter-narrative, such as the one presented by Jeff Keshen in his study of the Second World War, is beyond the scope of Vance’s work, the work would have benefited from some the inclusion of those who challenged this dominant form of Canadian identity.[2] 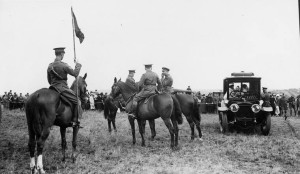 Nonetheless, Maple Leaf Empire is a welcome addition to a burgeoning literature on Britishness and its role in the development of Canadian identity. Social and cultural historians, and even historians of ethnicity will find value in the new dimension Vance adds to the topic. He keenly recognizes that the manner in which a distinct Canadian identity emerged out of British identity was much more complex than a parent-child relationship. While the metaphor was certainly applicable early in Canada’s history, the relationship forged through the experience of the two World Wars was on equal footing by 1945. Neither celebrating nor ignoring the British connection, Maple Leaf Empire raises important new questions over how and why the Canadian-British relationship evolved as it did, and took on the form that we now know today.