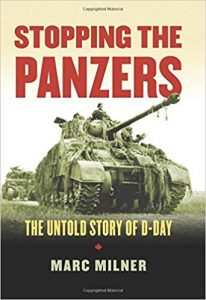 Stories of Canadian soldiers fighting in the Second World War are often pushed into the background or omitted entirely from narratives that discuss British or American contributions to the same battle. Works on D-Day and the Normandy campaign are no different. In much of the historical scholarship on the Normandy campaign, Canadians only occupy the space between the British attacks on Bayeux and Caen. Marc Milner’s Stopping the Panzers argues that historians have misunderstood the objectives of the Canadians in Normandy during the early days of the campaign. The 3rd Canadian Division, Milner effectively argues, was not there simply as a placeholder:

The Canadian moment in the early phase of Operation Overlord was brief but vital. Third Canadian Division did not storm Juno Beach simply to hold the space between British formations, it did not fail to take Caen when it had a chance, and it was certainly not forced into a tenacious defense because of the scale and quality of German counterattacks. The Canadians came to Normandy on 6 June 1944 to kill those counterattacks: to kill panzers (p. 25).

The terrain around Juno Beach, along the Mue River, was determined by the Allied planners to be the only place where a panzer counterattack could repel the landings (p. 8). The terrain inland from the American and British beaches was not conducive to armoured warfare. This was due either to the thick, infamous bocage or rivers and canals that created effective tank barriers to prevent the panzer divisions from attacking from the east. Milner notes that the planners of Overlord knew that Juno Beach would be critical, so they trained and equipped the 3rd Canadian Division accordingly.

The blend of primary and secondary sources demonstrates the thorough research done for this book. Milner emphasises the quantity of sources to show that the battle plan intended to stop the anticipated panzer counterattacks (p. 143). The detailed descriptions of the artillery formations could only be accomplished through intensive primary source research. Milner also includes personal stories of his father’s experience in Normandy, amongst other anecdotes, to demonstrate his knowledge of the topic and support his argument. The hair-raising description of an infantryman who destroyed a Panther tank with a Projectile Infantry Antitank weapon in the streets of Bretteville not only highlights the Canadian ability to resist armour attacks in various conditions but also Milner’s ability to write engaging prose (p. 271). The stories of veterans who fought in these engagements augment the argument well by filling in details missing from other narratives. Milner utilises primary source material from numerous archives located throughout the world including Library and Archives Canada, the National World War II Museum in New Orleans, Louisiana, and the Churchill College Archives in Cambridge, United Kingdom.

Despite the large volume of works on the Normandy campaign, Milner manages to add new interpretations to the history. In the tradition of Terry Copp, one of Canada’s foremost military historians of the Second World War, Milner uses the battlefield as a primary source.[1] This demonstrates the impact of Copp’s analytic style on historical scholarship concerning the Normandy campaign. Milner explains that his travel to the battlefields of Normandy influenced this book. Much like Copp, Milner believes that seeing and walking on the ground enables the historian to better understand what happened there during the war (p. xiv). Milner was not only influenced by Copp’s academic writings, however. The opportunity Copp provided Milner to lead tours of these battlefields also influenced his historical understanding (p. 22).

Indeed, Milner uses geography to demonstrate that the Canadians fought well with their assigned task of stopping a German panzer counterattack. This book contributes to the revisionist history of the Normandy campaign, in part started by Copp, which claims the Canadians fought exceptionally well. Milner provides an overview of the existing scholarship and situates his work within the current literature and narratives portrayed in Hollywood movies. He criticises unsubstantiated claims made in well-known films about D-Day and the Normandy campaign. For instance, Milner notes Canadians are absent from The Longest Day (1962), which misses the important role they played, and in Saving Private Ryan (1998), which places German armour in the American sector; a historical inaccuracy that Milner is quick to point out. His review of the existing scholarship is extensive and well thought out. Milner challenges C.P. Stacey’s official history, and other authors who use Stacey’s work to form their own argument (p. 15).[2]

Milner accomplishes what he sets out to do with this book. His work attempts to correct any general misunderstanding of what happened in the early days of the Normandy campaign. In so doing, he provides the reader with new interpretations of the Canadian role and combat effectiveness in Normandy. Milner notes that Field Marshal Bernard Montgomery set movement as the measure of success in Normandy.  He remarks how later historians noted the supposed Canadian failures to move forward when in fact the Canadians were preventing local attacks which were intended to serve as a prelude to a larger German armoured strike at the beachhead (p. 17). The fighting ability of the Canadians’ main opponent in Normandy, 12th SS Division, is another historical misunderstanding addressed by Milner. He concludes that the 12th SS, especially members of the Hitler Youth, were not an effective fighting force and certainly not any better than the Canadians they faced. Milner notes that these SS units were often over strength despite claims in Stacey’s official history (p. 162). Problems coordinating with Wehrmacht units and the continuous murdering of prisoners of war highlight the lack of discipline and fighting effectiveness of these units (p. 307). The most interesting reinterpretation of the Normandy campaign considers the role the Canadians played in the deception efforts before the landings took place. Milner argues that the First Canadian Army played a central role in the fake force created to convince the Germans that the main landings would take place at Calais and not Normandy. During the First World War, the Germans anticipated a major offensive by locating the Canadian Corps. This was also the case during the Second World War, according to Milner’s analysis (p. 54). Stopping the Panzers adds many compelling new interpretations that should not be ignored.

Milner’s book will appeal to both general and academic readers. The book will be particularly useful for undergraduate and graduate courses on the operational history of the Canadian experience in Normandy or during the Second World War. Milner’s work raises important questions that will spur detailed discussion and debate about the use of sources, the development of battle tactics, and the impact of Hollywood movies on our historical understanding. Professional military personnel will also benefit from reading Stopping the Panzers. Milner effectively demonstrates how geography determines strategy and tactics. This is particularly important to armour movements and the deployment of anti-armour artillery where geography could be advantageous. Milner’s description of the 7th Canadian Brigade’s defence of Norrey shows how the elevated firing positions of Canadian artillery and armoured counterattacks stopped German Panther tanks (p. 288). This position is described as being a fortress position that allowed the Canadians to use disciplined shell and rifle fire to repel multiple German counterattacks. Milner’s description of battle tactics provides valuable insights for understanding modern combat. Ultimately, this book is highly recommended for anyone who wants to learn about the vital role Canadians played in the early days of the Normandy landings.