One of the defining qualities of the Canadian Army is its regimental system. Regimental identities and traditions are essential in fostering and maintaining unit cohesion and morale. In Canada, there has been a resurgence of regimental histories in recent years.[1] This should come as no surprise, since many Canadian regiments have recently celebrated landmark anniversaries, and it has been decades since many of them have released an updated history. 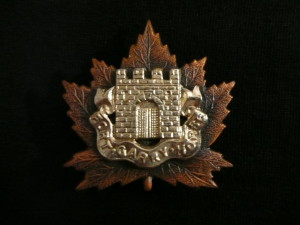 The book begins by tracing the history of volunteer cavalry in Manitoba. Cavalry units were used to resist the Fenian Raids and put down the North West Rebellion of 1885. In April 1907, the 18th Mounted Rifles was raised as a permanent Militia regiment, with “A” Squadron based in Winnipeg. It was soon decided that “A” Squadron would become a regiment in its own right, and on 15 April 1912, the 34th Regiment of Cavalry was raised; it was renamed the 34th Fort Garry Horse the next year. A regiment was born (pp. 16–24). 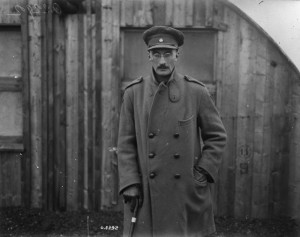 Lieutenant Harcus “Jock” Strachan, who earned the Victoria Cross for his actions on 20 November 1917 during the Battle of Cambrai, Dec. 1917

In 1914, the regiment mobilized for the First World War. After being shifted between various roles, the Fort Garry Horse finally became part of the newly formed Canadian Cavalry Brigade in February 1916. In 1917, the Fort Garrys participated in a number of engagements, most notably as the nucleus of a particularly devastating raid against a German trench at Ascension Wood on the night of 8/9 July. The raid was such a triumph that it “served as a model for other later trench raids and was studied by a number of Indian and British officers because of its success,” (pp. 54–55). But the Fort Garrys’ most famous action in 1917 was during the Battle of Cambrai in November. After a number of setbacks and communications problems, “B” Squadron made a lone attack through German lines. But the squadron took serious casualties, including its commander. Lieutenant Harcus “Jock” Strachan took charge of the squadron, leading it to silence a German artillery battery and inflict serious casualties on the enemy before bringing its survivors back to friendly territory, an act that earned him the Victoria Cross (pp. 56–62).

The heart and soul of Facta Non Verba are its chapters on the Fort Garrys’ experience during the Second World War. The book includes an entire chapter on the regiment’s mobilization and training as the 10th Armoured Regiment (Fort Garry Horse). This is an excellent contribution to the regiment’s historiography, for both of the book’s predecessors devoted scant attention to the regiment’s formative years of training in Canada and the United Kingdom.[3] Chapter 5 covers the fighting in Normandy in great detail, often describing the actions of junior officers, NCOs, and individual tanks. As part of the 2nd Canadian Armoured Brigade, the regiment landed on D-Day in amphibious tanks. The regiment played a crucial role in supporting the infantry throughout the summer. The authors provide a meticulous account of the regiment’s difficult engagements in Normandy, from the capture of the Carpiquet airfield, to the costly attack on Tilly-la-Campagne during Operation “Spring,” to the drive toward Falaise (pp. 155–192). 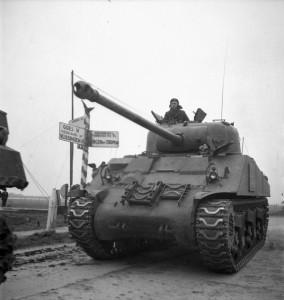 A Sherman Firefly tank of the Fort Garry Horse near the Beveland Canal, Netherlands, ca. 29 Oct. 1944

After the war, the Fort Garry Horse demobilized and returned to its status as a Reserve armoured regiment. In 1958, a reorganization of the Canadian Army saw the Fort Garry Horse raise a Regular Force unit in addition to its Reserve unit. Squadrons of the Regular unit, called 1st Fort Garry Horse, were deployed overseas for service in the United Nations Emergency Force in the Sinai, Canada’s NATO brigade group in West Germany, and the United Nations Force in Cyprus. After cuts to the defence budget, the Regular unit was disbanded in 1970. Throughout its time, 1st Fort Garry Horse employed various new types of vehicles, such as Centurion tanks, M113 armoured personnel carriers, Ferret scout cars, and even helicopters for the Reconnaissance Squadron (chap. 7). Much of the Cold War period was spent contending with thin budgets, but the Fort Garrys still managed to supply soldiers for peacekeeping missions, and the regiment was always on hand to assist their local community during frequent floods in southern Manitoba.

The book is not without its weaknesses. Even though the authors provide an excellent account of operations in Normandy, they do not treat the regiment’s exploits during other campaigns in Northwest Europe with nearly the same amount of detail. Particularly brief is the coverage of the fighting in the Rhineland, which accounts for only three short pages of text (pp. 200–202)—hardly enough to do justice to one of Canada’s most important campaigns during the Second World War. There are also certain technical issues that impede the book’s readability. At times, the narrative is choppy; the authors do not always transition well between paragraphs or chapter subsections. Errors in grammar and punctuation, which are not infrequent, can be distracting.

Nevertheless, the book’s value outweighs these issues. Facta Non Verba brings together a number of archival sources, publications, and personal testimonies. Whereas regimental histories have all too often examined their subject with a narrow lens, McNorgan and Crossley thankfully present readers with a thorough understanding of the Fort Garrys’ experiences, both in war and peace, within the broader political and strategic context. The book is packed with stunning photographs and artwork documenting the regiment’s experiences, helpful maps, diagrams of vehicles, and images of artefacts from the regimental museum. Moreover, a substantial portion of the book is devoted to annexes that provide greater detail on a variety of aspects of the regiment, such as its cadet corps, museum, memorials, battle honours, and insignia. The various nominal rolls and the citations of those Fort Garrys who were decorated for their outstanding service in war will no doubt prove valuable to those interested in militaria or genealogy.

Overall, as a comprehensive celebration of one of Canada’s finest armoured regiments, Facta Non Verba should find a welcome place on the bookshelf of any enthusiast of Canadian armour.

[1]. Recent publications include William J. Patterson, Soldiers of the Queen: The Canadian Grenadier Guards of Montreal, 1859–2009 (Montreal: The Regiment, 2009); Brian A. Reid, Named by the Enemy: A History of the Royal Winnipeg Rifles (Montreal: Robin Brass Studio, 2010); Bernd Horn, From Cold War to New Millennium: The History of the Royal Canadian Regiment, 1953–2008 (Toronto: Dundurn, 2011); and Kenneth W. Reynolds, Capital Soldiers: The History of the Cameron Highlanders of Ottawa (Ottawa: Cameron Highlanders of Ottawa Regimental Foundation, 2011).

[2]. McNorgan was the lead author of the histories of two other armoured regiments, The Gallant Hussars: A History of the 1st Hussars Regiment, 1856–2004 (London, ON: 1st Hussars Cavalry Fund, 2004) (with Christopher Johnson) and Black Beret: A History of the Windsor Regiment (RCAC), 1936–2006 (Windsor, ON: Windsor Regiment Association, 2006) (with Douglas A. Lock), as well as coauthor of The Royal Canadian Armoured Corps: An Illustrated History (Montreal: Robin Brass Studio, 2000) (with John K. Marteinson).