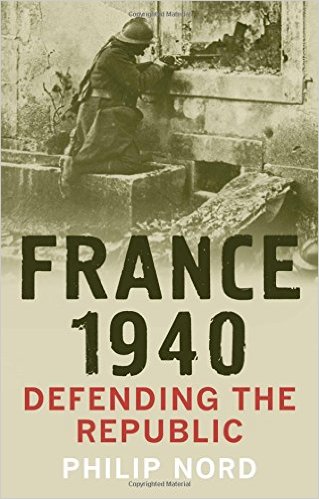 To judge by the number of books that have appeared over the years dealing with this subject in whole or in part, the fall of France to Hitler’s Wehrmacht in the early summer of 1940 has practically become a commonplace of the historiography, both scholarly and popular, of the Second World War. A glance at the military section of any well-stocked used-book store should bear this out. It was with some surprise, then, that I spotted this latest iteration of the well-worn “France 1940” theme among the new arrivals on offer at a major bookstore in downtown Toronto not long ago. Intrigued to discover what may have motivated the author, a specialist in nineteenth- and twentieth-century French history at Princeton, and his publisher—both very reputable names—to wade into these waters once again with the release of this slim hardcover, I rapidly snapped it up.

Despite its modest size, my purchase turned out to be nothing less than an overview of the entire phenomenon of the collapse of France’s Third Republic examined from the political, grand strategic, and strategic points of view. Six numbered chapters (not counting a separate introduction and conclusion) take us chronologically from the mid-1930s (with occasional glances at earlier events to provide context) to the July 1940 vote of the French National Assembly to abolish the constitution, paving the way for the collaborationist Vichy regime. Given that different factors dominated events at various stages of the unfolding drama, the chapters differ considerably from each other thematically. In Part I, “War Preparedness,” politics and grand strategy comprise the subject matter of chapter 1, “Diplomacy,” which discusses inter-war French, European, and world affairs to the outbreak of war—and even a little beyond, to Barbarossa. Chapter 2, “Armaments and Morale,” examines the war preparedness of all the major combatants in the European theatre, including the United States and the Soviet Union, from the very different standpoints of arms production and public opinion; the discussion of the latter is probably one of the more original contributions offered in this book.

Part II, “The Battle of France,” deals with material that, it may as well be admitted, has been largely done to death elsewhere. Grand strategy and strategy are the subjects of chapter 3, “Battle Plans,” examining the approaches taken to the conduct of total war by not only the French and Germans but also, for comparative purposes, the Soviets, the Americans, and others besides.

Serious discussion of the fighting itself is largely confined to chapter 4, entitled, appropriately enough, “Lightning War.” It should perhaps be emphasized at this point what Nord’s book does not set out to do. Devotees of the “face of battle” approach to military history, wherein the emphasis is on small-scale tactics and the experience of the common soldier, will need to look elsewhere. Indeed, the work can scarcely be described as a military history at all. While there is some discussion of the relative merits of French versus German tanks and aircraft, for example, and some broad-brush summaries of the way individual German generals overcame unexpected hurdles at certain points in the campaign, there is little else examined here below the strategic level of analysis. The closest one will get to that sort of thing is the striking dust jacket photo of French infantrymen in an urban combat setting, which, aside from a photo of the author, is the only illustration included.

The tack changes once again in part III, “Death Comes to the Republic,” which deals almost entirely with the political. Chapter 5, “Armistice,” introduces us to the fractious politics of France in that period, wherein the military, the government, and society at large were divided between defenders of the secular Republic on the left and a right wing composed of fascists, Catholics and royalists—a situation not unlike that of Spain during her Civil War. We see how leading figures of the Right in the government and the army took swift advantage of the defeat on the battlefield to engineer the demise of the Republic in chapter 6, “The Road to Vichy.” While many books of this size attempting to cover such a large amount of material leave the reader with the impression of a “breathless dash,” Nord largely avoids this by focusing on the more important figures and devoting a good amount of attention to them; indeed, the author’s depth of analysis here, as throughout the book, left me with the impression of having read a much larger volume. That being said, the number of names brought into play of statesmen, generals, and lesser officials, both civilian and military, may cause the reader new to the subject to be thankful for the index.

Thus far, my account may seem to be of a book that is well written but largely derivative, offering a narrative that has been presented many times before, but there is more here than that. For as Nord explains in his introduction, the longstanding view that France’s defeat was due to military unpreparedness and a Republic that was somehow “decadent” has been challenged by revisionist historians who maintain that the French put up a creditable effort in the spring of 1940, and that her defeat was just as much a defeat for the Dutch, the Belgians, and the British Expeditionary Force as well. We learn, for example, that France’s military budget increased more than sevenfold between 1935 and 1939. Due to this massive re-armament drive, the French had rough parity in armour with the Germans by the eve of the attack. And it must not be forgotten that some 90,000 French soldiers were killed in six weeks of fighting, hardly an indication of an army unwilling to fight. However, Nord points out that the revisionist viewpoint got its start in the 1970s, and so it is not clear how “revisionist” an approach can be that is already four decades old—except, of course, with respect to approaches that are even older. Therefore, the claim on this book’s dust jacket that it is a “revisionist account,” while true in a narrow, technical sense, is more than a little disingenuous.

Do we need, then, another book on the fall of France? The holdings of any good-sized used-book store would suggest that almost anything to do with the Second World War will sell, whether it be from the purveyors of picture books such as Osprey to producers of scholarly monographs like Yale. That does not mean, however, that the present volume is not worth attention. On the contrary; for its analytical depth, surprisingly broad comparative perspective, and even-handed discussion of events on the battlefield and off, I strongly recommend it to those, perhaps not satisfied with Wikipedia, who would like an excellent introductory exposure to the “France 1940” theme before deciding whether to pursue the subject further with more specialized volumes.