In light of the ongoing debate over the procurement of the F-35 Lightning II fighter for today’s Royal Canadian Air Force (RCAF),[1] the release of this book is quite timely. Cold War Fighters is part of the University of British Columbia Press’ Studies in Canadian Military History series (produced in conjunction with the Canadian War Museum). It is a case study of the political, military, and aviation industry decisions that led to the procurement, development, and introduction into RCAF service of the F-86 Sabre single-engine day fighter and CF-100 two engine all-weather fighter-interceptor. Wakelam, currently an assistant professor in the History Department at the Royal Military College of Canada (RMC), has written a solid examination of the trials and tribulations of Canadian fighter procurement during the early Cold War period. Wakelam is ideally suited to address the subject. He is one of the country’s leading air force historians and air power academics, and as a former air force officer had first-hand experience dealing with procurement in the late 1980s.

Cold War Fighters is a revised version of Wakelam’s excellent RMC War Studies Master’s thesis,[2] and the book breaks important new ground in our understanding of early Cold War Canadian fighter procurement. Firstly, it reveals that 1945-1954 was not necessarily a clear-cut time of pride for the Canadian aviation industry, as the troubles surrounding the production of the Avro CF-100 demonstrates. Secondly, Wakelam shows that “the air marshals” (the RCAF leadership) were intimately involved in the procurement and decision-making process regarding the fighters and knew exactly what they were doing. The air marshals were not narrow-minded; instead, through careful planning, analysis, and consideration of geo-strategic and political realities, they maintained a clear and consistent concept of what Canadian air power should be during the early Cold War period. They approached the subject of Canadian air power with a wider perspective that not only included the RCAF but also “the domestic ability to supply the fighting service with up-to-date equipment.” (p. 14) Adaptation to unforeseen developments was key, and the RCAF leadership, “although reactive at times,…largely made logical, cogent recommendations and conscious decisions.” (p. 142)

Demonstrating an impressive understanding of postwar Canadian finances and the link between economic concerns and defence procurement, Wakelam effectively examines attempts by politicians, air marshals, and aviation industry leaders to strike a balance between air power, statecraft, and finances. He situates his study into an overall examination of Canadian air force strategic planning for force development. Wakelam addresses alliance constraints on the RCAF that needed to be balanced with Canada’s own territorial defence needs and the necessity, as articulated by the air marshals, to develop and support a robust, world class aviation industry in Canada. They understood the requirement to defend Canada and be a good ally in a way that did not overburden the country’s finances and economic wellbeing. 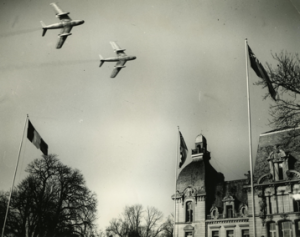 A pair of F-86 Sabres fly over Toronto. Built under license by Canadair in Montreal, the Sabre became the cornerstone of the RCAF’s 1 Canadian Air Division in Europe and also the RCAF Auxiliary during the 1950s. (photo courtesy of the Canadian Forces College)

Wakelam does not mince words when stating that “support for a domestic aviation industrial base proved problematic and costly.” (p. 18) He gives credit where it is due but is not afraid to be critical of failures. Wakelam shows that the Canadair (Montreal) produced Sabre was a true Canadian aviation industry success story, while constant delays and problems with the development and production of the “Clunk” (as RCAF aviators referred to the CF-100) meant that the story of Avro’s fighter-interceptor was more disappointing than generally accepted. The RCAF brass did not give the Canadian aviation industry a proverbial “blank cheque”; the air marshals were practical and responsible officers who were not obsessed with going the Canadian route if it did not satisfy fiscal, operational, and delivery time requirements. Wakelam dedicates significant space to the equally important, yet often overlooked, issue of engine production, a capability that Canada, to its great detriment, did not have during the Second World War. The development of the Avro’s Orenda engine ensured that world-class power plants were available for both the Sabre and the Canuck, but Wakelam shows that limited numbers of the engine further delayed the production of the CF-100 for both the RCAF and potential external buyers. Indeed, Wakelam does an excellent job addressing the importance of foreign markets – especially amongst close allies – as a means to sustain a world-class aviation industry. In particular, he is critical of the failure of Avro Canada to meet production deadlines and attract sufficient foreign interest in the Canadian designed and built CF-100, an issue that would also plague the aircraft’s successor the CF-105 Arrow.

Wakelam’s book offers insight into the fundamental cultural paradigm shift of the RCAF away from the British Royal Air Force (RAF) model and towards the United States Air Force due to the requirement to operate with the Americans in the defence of North America. Unlike other literature on this subject, however, Wakelam does not ignore the British connection. He details the RCAF’s purchase of the British-built Vampire fighter jet in the late 1940s as a stopgap, the continuing desire amongst the Canadian air force brass to provide Britain with help if needed (this partially explains the genesis of the NATO air division), and of course the hope that Canada would be able to sell the Sabres and (particularly) the CF-100 to the RAF. 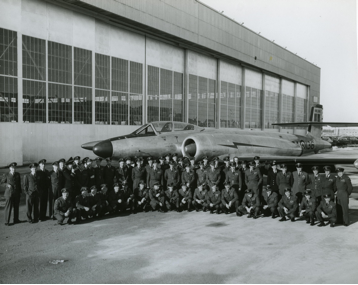 Students from the RCAF Staff College pose in front of a CF-100 interceptor during a “staff ride” visit to the Avro Canada plant in Malton.  (photo courtesy of the Canadian Forces College)

Cold War Fighters is a welcome addition to the historiography of Canadian military procurement and the Canadian aviation industry. It complements other recent work on the topic by Raymond Stouffer and Aaron Plamondon,[3] and respects the contribution made by aviation enthusiast writers by giving credit to notable authors such as Larry Milberry. Wakelam provides a much needed academic examination of the subject of Canadian fighter procurement during the exciting “Golden Years” of the RCAF.

Perhaps most importantly, Cold War Fighters offers concrete lessons for today’s RCAF leadership, which is currently faced with the problem procuring new aircraft, not limited to the F-35, and doing this within the constraints of a declining defence budget. The air marshals in 1954 also faced fiscal restraints due to the end of NATO’s force expansion, and (like today) this compelled the RCAF to re-adjust its approach to fighter procurement. Wakelam’s case study shows that the Canadian military was (and remains) too small to support industries on its own without expanding to foreign markets to ensure viability and profitability. Though domestic production may be beneficial for local jobs (not to mention pork barrel spending), it must be properly balanced to meet military requirements. These requirements must also be clear and consistent: when it came to delays in producing the CF-100, Wakelam shows that Avro was not the only guilty party, as service tweaking/changes to the aircraft impacted the company’s ability to meet production and delivery timing goals. Lastly, Cold War Fighters offers solid examples on how the air marshals utilized the RCAF’s Directorate of Public Relations (and The Roundel service magazine) to promote the necessity of the fighters to the Canadian public.

This book is very readable and well-researched. Though some may find the subject of military procurement dull and colourless, Wakelam’s engaging writing style (enhanced by his obvious passion for the subject) makes reading Cold War Fighters an enjoyable experience. Wakelam compensates for limited access to Canadian aviation industry documents by utilizing the most relevant primary sources on his subject. These include the holdings of Library and Archives Canada, the Department of National Defence’s Directorate of History and Heritage, plus Canadian newspaper articles, which Wakelam utilizes to give the reader a good feel for Canadian public opinion on the development of fighter aircraft in the early 1950s. Wakelam’s notes, bibliography and index are meticulous and informative, and the book contains a number of superb photographs that should appeal to aviation enthusiasts and, as Wakelam notes with his typical wit, “the pilots who pick up this volume.” (p. ix) 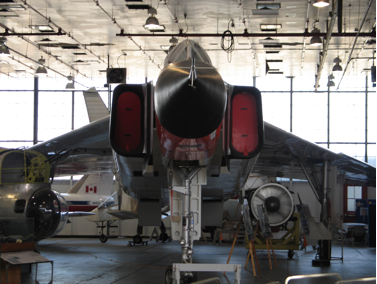 The replica CF-105 Avro Arrow and the Orenda engine, built through hard work and dedication by the members of the Toronto Aviation Museum at Downsview. (photo by reviewer)

Wakelam comments that his book is a pre-history to Canada’s most famous (or infamous) fighter procurement story, the CF-105 Arrow. (p. vi) Though there is a good discussion of the Avro Arrow in the concluding chapter, further references to this aircraft throughout the book – and perhaps even in the title – would have been a good way to broaden the appeal of the book to aviation enthusiasts in particular and the Canadian public in general. Nevertheless, such drawbacks are minimal. Wakelam has made an important contribution to the historiography of the Canadian aircraft industry and the institutional history of the RCAF. By providing the context, analysis, and research strength that was lacking in previous non-scholarly publications on Canadian air force procurement, Cold War Fighters succeeds in bridging the gap between academic and popular history. The book is highly recommended for academic military historians, military professionals (both serving and retired), those interested in Canadian defence production/procurement. It will also appeal to aviation enthusiasts.

[2] Of note, RMC theses are not available through the online Library and Archives Canada Theses Portal <http://www.collectionscanada.gc.ca/thesescanada/index-e.html>, and thus remain a largely untapped resource for military historians.