SLA Marshall’s iconic work, Men Against Fire, has generated its fair share of criticism. Marshall claimed that only a small percentage of Allied troops in World War II actually fired their weapons in combat, and naturally this generated a fiery historiographical debate. Several professional soldiers have risen to prominence within this debate, seeking to discredit both Marshall’s claims and his research methods. Robert J Spiller, formerly of the Command & General Staff College, is probably the most famous and aggressive in his attacks on Marshall. Spiller argued that Men Against Fire and its ‘ratio of fire’ argument suffered from a poor methodological framework, and that most of Marshall’s evidence simply did not exist.[1] Robert Engen’s Canadians Under Fire is the most recent addition to this discussion, and represents the newest and perhaps most innovative attempt to disprove Marshall’s claim. 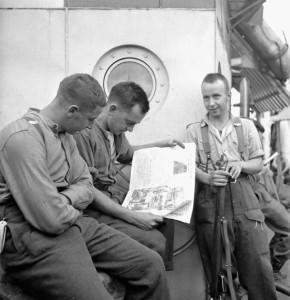 Canadians Under Fire has two objectives: first, Engen examines accounts of Canadian infantry soldiers in combat. He approaches this topic through the careful analysis of a number of experience questionnaires taken by Canadian officers following their service. In this way he resituates the idea of combat effectiveness within units and arrives at a better process of analysis. Within this examination of the Canadian officer surveys and their results lay Engen’s second and more provocative purpose: to directly engage with Marshall’s ‘ratio of fire’ claim. With these dual purposes intertwined, Engen concludes that the Canadian officer surveys demonstrate that Canadian infantry were quite effective and competent soldiers. He goes on to argue that the findings of the surveys refute Marshall’s ‘ratio of fire’ argument. He reports that the officers claimed the problem with their men was that they fired too much.[2] This point represents the high mark in Engen’s work, because he is entering new evidence into this debate, something previous authors have been hard pressed to do. His analysis of the Canadian officer surveys offers a wonderful example for other scholars in working with similar sets of data.

The strength of Engen’s work lays in his meticulous attention to detail, particularly in his analysis of over 300 surveys. In doing so, Engen outlines a framework of his research methodology, in which he fully vetted his sources and anticipated criticisms that could be raised against him. Such criticisms include that his sample size is too small, or that the timing of the surveys’ administration could have affected the objectivity of the respondents. Engen acknowledges the limitations of the questionnaires and provides the reader with his gauge of their historical validity.[3] Engen describes how he utilizes both qualitative and quantitative approaches of analysis on each section of the surveys. With these methodological dimensions, Engen attempts to refute another of SLA Marshall’s claims in Men Against Fire, and is more convincing than his attempt to refute the ‘ratio of fire’ argument. 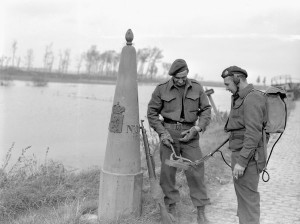 Sappers of the Royal Canadian Engineers (R.C.E.), 3rd Canadian Infantry Division, sweeping for mines along the border between Belgium and the Netherlands, 16 October 1944.

One of the pillars of SLA Marshall’s theory is that he characterizes Western culture and civilization as being inherently peaceful and non-aggressive in nature. Marshall claims that this was a large motivating factor in the soldier’s reluctance to fire their weapons in combat. Engen counters this by proposing a new dynamic in the cultural conversation. He claims that Marshall was discussing the espoused values of western culture and not the actual values in use by the different societies participating in the war. Engen enters an ongoing discussion concerning the interplay between a society’s culture and its ‘way of war’. Recent works like Azar Gat’s War in Human Civilization and John Lynn’s Battle: A History of Combat and Culture argue for interwoven nature of culture and warfare; Gat more directly than Lynn.[4] Using this distinction, Engen argues that inter-war Canada‘s culture accepted, encouraged, and celebrated mass applications of violence when necessary. Engen does not argue for a blood drenched Canada, but instead points to multiple facets of Canadian life that characterized by violence.[5] He adds to this claim by arguing for the centrality of the experiences gained during the First World War. Engen claims that the levels of violence experienced during that earlier conflict had a profound impact on how Canadians viewed and accepted warfare. This is a very solid criticism of Marshall and one of the most noticeable achievements of this work. Scholars who discuss warfare and culture must deal with two contending natures of a society’s culture: the ideal values versus the values in reality.

Another of Engen’s strengths is the manner in which he displays his evidence. He describes in depth the nature of both the surveys and the men who completed them. His simple description of the theories employed brings the reader into the fold, and affords other scholars an intimate view into his methodologies. This openness coupled with his willingness to preempt criticism make this work an ideal guide for young scholars who may be working with similar source bases. This work provides a useful framework of how to approach a source base and emerge with quantifiable and qualitative evidence that can be used to form well-supported conclusions. 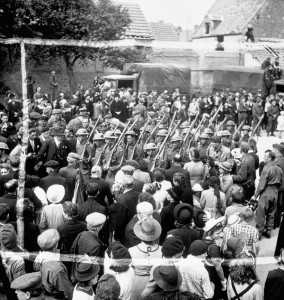 While the greatest strength of Engen’s work lies in its research methodology and methodology, this is also the site of its biggest shortcoming. While Engen originally analyzes over 300 surveys, he concludes that only 161 of them can be used in the study to formulate conclusions. This sample size is simply too small to fully and properly refute SLA Marshall’s claims and arguments. The true power behind Marshall is that his source base included thousands of interviews with soldiers immediately after participating in combat. While there are legitimate concerns and issues with Marshall’s methodologies because hard evidence of all of these interviews does not exist, a study based upon this small sample size does not have the evidentiary girth to overturn Marshall’s ‘ratio of fire’ argument. Another weakness that grows from Engen’s source base is that it concerns Canadian soldiers, while Marshall was primarily concerned with American soldiers. This is a smaller issue, but one that must be noted nonetheless. This is not an attack on Engen’s work, as he has provided the debate with perhaps the best researched and documented case against Marshall to date. This simply speaks to the true nature of SLA Marshall’s literature and the legacy that it carries. While studies like Engen’s will continue to make scholars question the validity and methodologies of Marshall, his works will continue to be read and discussed as seminal contribution to the overall history World War II, as well as American military historiography.