We are the Fenian Brotherhood, skilled in the arts of war,

And we’re going to fight for Ireland, the land that we adore.

Many battles we have won, along with the boys in blue,

And we’ll go and capture Canada, for we’ve nothing else to do. 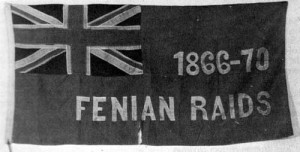 A flag commemorating the Fenian Raids

The Fenian threat faced by New Brunswick in the years prior to Confederation is often referenced, but has rarely been analyzed in detail.  The looming threat of invasion coupled with the lack of a cohesive and cooperative system of defence in British North America, according to historians like Peter Vronsky,  reinvigorated public support for Confederation in New Brunswick. Unfortunately, the details, nuances, and expansive scope of the motives and actions of both the people of New Brunswick and the Fenians  have largely been overlooked. Robert L. Dallison’s Turning Back the Fenians: New Brunswick’s Last Colonial Campaign makes a significant contribution to this part of our history by shedding light on the motivations, maneuvers, and organization of New Brunswick’s militias in their fight against Fenian invasion.

Rather than using the introduction to tell tales of military might or skillful diplomacy, Dallison selects a clever and evocative anecdote of a Fenian attack on the New Brunswick Indian Island customs house. The story of this small but crucial incident in the Spring of 1866 stars a startled customs officer, his frightened wife, and a band of marauding Fenians. (p. 9)  Ultimately the raid produced little more than a symbolic victory and the Union Jack flag that had once hung over the Indian Island customs house, but it is this theme of small-scale belligerence and isolated aggression that drives Dallison’s narrative and effectively captures the character of the Fenian threat in eastern British North America.

Dallison begins the first chapter with a brief history of the Fenians by outlining the rise of Irish nationalism, key players in the movement, and the establishment of these militant nationalists in the -United States.  (p. 13) By focusing on Fenian leaders like John O’Mahony, the author is able to piece together the motivations and ultimate goals of the group and, more importantly, explain why an Irish nationalist party determined to obtain on independence from Britain was able to garner so much support in the United States. As Dallison points out, since there were more Irish citizens living in New York City than in any city in Ireland, the Northeastern United States was an ideal breeding ground for pro-independence radicalism.  Furthermore, the lack of success in the campaign against the British in Ireland made the decision to fight a proxy-war in British North America an appealing option, particularly amongst battle-ready American Civil War veterans who you craved military glory, and other eager recruits that were promised Irish gratitude and significant enrolment bounties. (p.14)

The proposed Fenian invasion of British North America was not necessarily driven by a desire to acquire new Irish territory so much as it was a calculated effort to gain a territorial bargaining chip in the negotiations with England over Irish Independence.  As the Fenian Major-General T.W. Sweeney stated in The Proclamation to the People of Canada, Nova Scotia, and New Brunswick, “…We have no issue with the people of these provinces, and wish to have none but the most friendly relations…Our blows shall be directed only against the power of England, her privileges alone shall we invade, not yours.”  While this nuance may have been appreciated by some Irish inhabitants of British North America, the distinction was lost on most, who instead understood it as an aggressive invasion of their homelands. 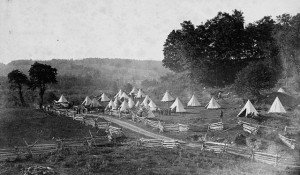 Initially, the British parliament viewed active defence of the colonies a cost-prohibitive activity, but with the understanding that the Fenians were a threat to not only the colonies, but to the empire as well, English forces were eventually sent to bolster and train the ill-equipped and under-prepared colonial militias.  It is during this interim period where colonial militias across New Brunswick were forced to mobilize and provide their own training, funds, and equipment. This is the primary focus of Dallison’s work.  Chapters 3 through 6 explore the early challenges and ultimate rewards of raising a volunteer militia, including the initial lack of candidates, the inability to adequately train existing recruits, personal and professional clashes between officers, and the eventual organization and deployment of often impressive, battle-ready forces.  As a military historian and retired lieutenant-colonel in the Canadian Army, it is obvious that the organizational and tactical elements of this period are where Dallison’s true interests lie.  He writes eloquently and authoritatively on matters related to training exercises, weapons, troop organization, officer performance, and life in a military setting.  By interweaving more factual accounts of troop movements with representative tales of a command structure that could demonstrate great foresight or, conversely, embody elitism and dysfunction, Dallison paints a more vivid and complex picture of militia life than historians whom have focused solely on either military tactics or leadership.

By chapter 7 the author begins to outline the Fenian incursions into New Brunswick.  In April 1866 the Fenians had finally moved across the St. Croix River near St. Stephen with the hope of seizing Campobello island. (p. 73)  Expecting a quick victory, the invaders were met by well-trained local militiamen, bolstered by British forces, as well as a United States naval squadron instructed to contain the Fenians in a demonstration of American neutrality.  This failed raid, along with other similar acts of aggression, ended up being the only attempts made against New Brunswick. By June 1866 the Fenian threat was largely neutralized, and the threat of a full-scale invasion had been averted. 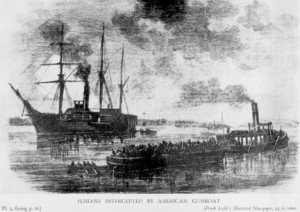 An American gunboat turning back a Fenian boat.

While Dallison provides an astute and comprehensive analysis of the military aspects of the Fenian crisis in New Brunswick, he falls short in explaining the social, political, economic, and religious factors that led to the crisis.  Throughout the work Dallison alludes to reasons why the Fenians gained such power and recognition within the United States, and why they failed to garner significant influence in the predominantly Irish areas of New Brunswick, but fails to provide a consistent or comprehensive account of what led to the failure of such a well-funded and widely supported force.  Furthermore, the author dedicates little more than one paragraph to explaining how a nation-wide Protestant backlash to the Fenians developed in to wholesale Catholic condemnation that spread across British North America. (p. 22)  The mention of this topic ignites the reader’s interest in the subject, but Dallison neglects to explain how such religious divisions were ultimately acted upon or resolved. Likewise, there is no mention of the economic or social impact caused by militiamen having to temporarily abandon their jobs at the local mills and foundries, nor the impact this would have had on their families. Dallison’s study could also have benefited from a more meaningful discussion of how militiamen reintegrated after the crisis and were compensated for their service. A brief explanation of how these soldiers have been remembered or celebrated historically in New Brunswick would also have been beneficial.  While I may be accused of asking for details that did not fall into the scope of this work, I believe that a more well-rounded analysis of the religious, economic, and social impact of the Fenian crisis would have provided a more nuanced understanding of the events of 1866.

Nonetheless, Robert L. Dallison’s Turning Back the Fenians provides valuable insight into the events surrounding the Fenian crisis in New Brunswick and elucidates the experiences of the local militiamen charged with defending their homeland.  Rather than simply using this work to give a general overview of the military tactics involved in the crisis, Dallison is able to breathe new life into this oft-neglected aspect of pre-Confederation history.  As the author concludes: the events surrounding the potential invasion, and the political discussions they ignited, set the course for New Brunswick’s entrance into Confederation, and as a result, ”Canada is the real legacy of the Fenian Crisis of 1866.” (p. 110)