Review of Shawna M. Quinn’s ‘Agnes Warner and the Nursing Sisters of the Great War’ by Kathryn Rose

The experience of nursing sisters during the First World War is a relatively underdeveloped area of study in Canadian military history. While there are a few official histories and memoirs, there is very little recent scholarship exploring the Canadian role compared to other combatant nations, particularly the British. Like their overseas counterparts, Canadian nurses and doctors were required in great numbers on the front lines to care for the sick and wounded, joining in the thousands. Yet few personal memoirs and documents exist to help recount their experience, nor are they covered in official history. Shawna M. Quinn’s Agnes Warner and the Nursing Sisters of the Great War, which includes a reprint of Warner’s memoir My Beloved Poilus,  provides an evocative window in to her devotion to the communities of France and Belgium, and the nursing experience during the war as a whole. 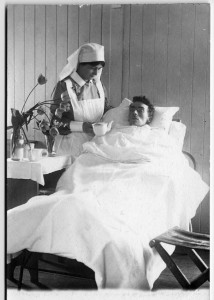 Nursing sister is preparing to assist a patient with a drink at the no. 2 Canadian General Hospital in Le Treport, France.

Rather than let Warner’s letters stand alone. Quinn includes three introductory chapters that provide context for her wartime experience. In the first chapter, Quinn gives a brief historiographical overview of works that highlight nursing in the Great War, particularly memoirs. The second chapter addresses the development of nursing as a profession, the ways in which nurses were involved in the war effort, and the general experience of nursing from New Brunswick during the war. The third chapter is a short biography of Warner, providing  information on her pre-war life and the context surrounding her decision to travel overseas and offer her skills to those suffering from the effects of the war. As Quinn explains, Warner had initially traveled to France as a private nurse when the war began.  She returned to New York, and after a brief stay in Saint John, returned to France once more. Warner, an American citizen, was considered neutral, and was not attached to the Canadian or British armies. She moved around the country autonomously, offering help where it was needed. Following the chapter on My Beloved Poilus, Quinn provides some details of Warner’s life after the publication, including the rest of her wartime experience, her return to New Brunswick, and her final days. The unique structure of the book moves it beyond the scope of a traditional biography or edited collection – it is a historically contextualized life history interwoven with wartime vignettes.

Warner’s letters primarily describe her experiences as an unattached nurse in France during the war. Warner frequently reflected on the struggles soldiers and civilians faced during the war and the variety of ways in which individual communities contributed to the war effort.  When Warner initially departed for France, the community of Saint John sent with her a collection of funds to aid the French town of Divonne-les-Bains. In her letters, she described how she used the materials and funds. On March 21, 1915, she thanked the Red Cross and the IODE of De Monts for their contributions, which had been “sent to a small hospital in Normandy near their chateau, some to the hospital here, and some to a small hospital not far from here where they are very poor; the doctor who was in charge there nearly wept when he knew the things were for him.” (p. 73) When Warner was overseas her family and friends decided to gather the letters for publication in an effort to raise additional funds. Warner did not write the letters with the understanding that they were to be published. They are candid portrayals of her experience directed solely towards her friends and family.

The content of My Beloved Poilus, a French term for ‘solider’, deserves some elaboration. Warner writes about her experience in France, training civilians in the town of Divonne-les-Bains to care for wounded soldiers and civilians. In many cases, she followed the progress of her patients so that family and friends could monitor them and learn about the processes involved in care-giving and nursing. Readers are provided with an intimate sense of how busy the nurses were and their level of involvement in the care of the wounded. Warner helped prepare hospitals for the Red Cross and establish others, promoted local initiatives to improve the health of soldiers and the community, and regularly witnessed the hardships of war on local families. Throughout her letters, Warner used these experiences to encourage her family family and friends (and Saint John residents in general) to raise more funds. In one instance Warner recalled a woman whose one son was killed in the war, and other son had been crippled for eighteen years. Their plight compelled Warner to give five francs, a De Monts dressing gown, and some warm underclothes. (p. 92) 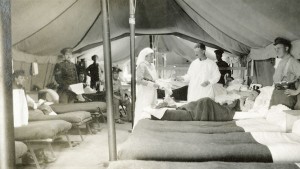 A nursing sister is assisting a doctor in a ward at the tent hospital. She is holding out a tray for him to take medical tools from.

Warner’s letters provided readers in Saint John with a first-hand account of the human toll of the war, but also made sure to point out the positive impact they could have through their giving: “I think it was the sweetest thing of little Mary Murray to send me her birthday money for my soldiers, I have been getting them fruits and cigarettes for Sunday. That is the one thing that overwhelms me at times – the awful suffering every way one turns.” (p. 97) Pain and despair often surrounded Warner, but the charity of Canadians back home always motivated her to push on.

Saint John’s generosity never went unnoticed by Warner. Throughout the war she continued to correspond with her family and the community responded accordingly with persistent donations of money and materiel. Had she known she was speaking to a public audience, Warner might have adjusted her writing and what she included in these private and sometimes quite personal reflections. Indeed, there are several occasions when she is less than optimistic about the war. “I am afraid there is no chance of the war finishing before the winter is over” she wrote in (what month/year? (p. 84). In most letters, however, Warner appears to be a dedicated nurse writing to a respected family member, with little content that would warrant censure. 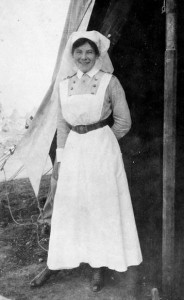 Nursing sister Ruby Gordon Peterkin standing at the entrance of a tent.

This book is not without its flaws. At various points, a few minor structural issues confuse the reader. Such is the case in the first chapter where Quinn dedicates the first paragraph to a discussion of memoirs published by other nursing sisters, and the state of the historical literature available on the nursing experience during the Great War. While valuable information, the chapter lacks a discussion of Warner until the final sentence. Warner’s contribution and place within this literature might have been better explained by a brief introduction of her work at the beginning of the chapter, adding additional context to the information offered on the experience of nursing sisters in Canada. The lack of a focused introduction makes it challenging to determine the intention of Quinn’s work from the beginning. The author also fails to provide the reader with a proper conclusion.

Nonetheless, Quinn’s work is still a valuable contribution in furthering our understanding of the experience and diverse responsibilities of nursing sisters in the Great War. Readers will also enjoy learning about the various ways in which communities like Saint John contributed to the medical effort overseas through their charitable endeavours. Warner, as a healer and symbol of a community’s generosity, ultimately serves as a enlightening example of the complexities inherent in the relationship between the home front and battle front.