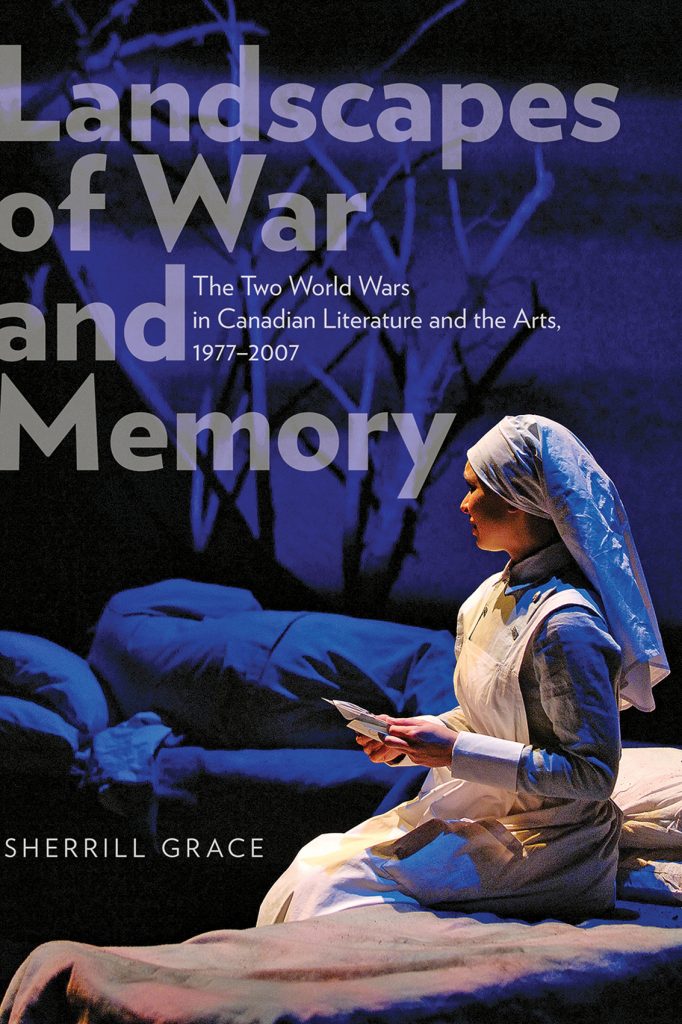 Literature and theatre allows authors and playwrights to peel back the past, drawing out the emotional, the raw, and the neglected stories.  In the field of war and conflict in Canada, there is no shortage of novels, plays, and memoirs of the two world wars, and Professor of English Sherrill Grace, the leading scholar in the field, delves into these works in her book, Landscapes of War and Memory.

Grace seeks to map the landscapes of memory, as she describes it, by analysing the novels, plays, and writings (as well as the occasional work of art, film, and digital product) depicting the two world wars since 1977.  The start date is an odd one—the publication of Timothy Findley’s The Wars—and the author’s justification for it is painfully inadequate.  It might have been wiser to make the study of one of the world wars, and not both, and then to include all literature from 1914 or 1939 to create a more comprehensive study.

Before engaging with the content, I want to note that this is a beautifully constructed book.  The University of Alberta Press has allowed for full-length images and large-scale quotations, one per page at the start of each chapter, which convey mood and message.  Grace’s writing is sharp, incisive, and underpinned by deep knowledge.  This is a personal exploration of the literature and she frequently injects herself into the book, noting how she responded to witnessing plays or reading novels.  This adds an immediacy and intimacy that I welcomed.

I will follow her lead and draw upon the personal pronoun.  I sat with this book for quite a while.  It is a brick of a tome, with close to 500 pages of text, but I enjoyed the long, slow read.  I was able to reconnect to many of the novels or plays I had read in the past, as Grace led me through the literary landscape.  I often paused in reading her book and turned back to one of the novels or plays to read further.  Her own immense study covers dozens and dozens of novels and cultural products, and it is both a refresher for those who have read war literature and a guide for future consumption.

I almost always agreed with Grace’s reading of a particular text, and she delves deeply into obscured meanings.  Grace’s multi-faceted reading of the subject matter allows for keen observations, wide-ranging parallels to other works, and delightful transgressions into art or poetry.  Only rarely did I find a misstep, such as Grace’s interpretation of Findley’s The Wars.  She is too enamoured with the novel and while it remains an anchor in the literature, protagonist Robert Ross is unlike almost any soldier from the Great War.  While Findley used letters and diaries to better understand the Canadian war experience, the sensitive Ross springs more from Findley’s imagination than from the period of 1914 to 1918.  Also, to characterise Ross’s shooting of his sadistic captain in the head as acting “wisely and bravely in a crisis,” is a strange reading of murder (p. 127).

Grace’s writing is usually clear and insightful, although one occasionally has to decipher paragraphs such as this: “…the art I am concerned with inscribes that bearing of witness at multiple discursive levels: the work itself bears witness, but it may also perform the witnessing process through its characters, themes, tropes and narrative structure (in live theatre its staging) thereby involving us in the process.  In other words, we become constitutive actors in the witnessing, helping to produce the textual witnessing impact simultaneously with our experience of pleasure in the artistry” (p. 69).  Such eye-glazing text is mercifully limited.

There are several major themes running through Grace’s analysis.  A surprising number of stories, poems, plays, novels, and films employ the trope of the ghost and the haunted soldiers.  The powerful and now common narrative of shellshock that underpins many of the cultural works is also a haunting of sorts.  In several poignant passages, Grace argues that the war overseas always comes home.  She’s dead right.

Grace also makes frequent reference to bearing witness to war.  This phrase grows tiresome in the book, but it bears thinking about.  If this genre of fictional literature in all its form is primarily to bear witness to war, are these “witnesses” to be trusted?  Can authors actually bear witness to an event that they did not witness?  All of the Great War authors and all but a handful of Second World War novelists—putting aside Colin McDougall and Earle Birney—did not experience war in uniform.  At the most basic level, this is make-believe writing.  That is, of course, a grossly unfair characterisation of what authors and artists do, but they are presenting for readers an imagined landscape.  They are mapping the contours of constructed thinking.  Is it right to classify this as a landscape of memory, when the authors doing the work were not there and cannot, therefore, remember or depict a landscape upon which they did not tread?  I am not willing to push this argument very far, but I find it interesting that Grace does not address this seemingly fundamental issue, and instead fully embraces the outpouring of writing as a collection of retellings of war.

Grace also observes how key texts destabilise the accepted version of history, offering nuances, challenging narratives, and unsettling the story.  Joy Kogawa’s Obasan (1981) offered a powerful entry point into the story of Japanese internment during the Second World War, which had largely been forgotten by the early 1980s.  “We come from our untold tales that wait for their untold telling,” writes Kogawa (p. 287).  I accept that one of the strengths of fiction is to offer new perspectives on historical events.  A novel or a play can force us to rethink our assumptions, and sometimes even brings them crashing down.  But one of the weaknesses in Grace’s argument is that there is, I think, no real accepted narrative of the world wars.  The Great War is more than the colony to nation story and the Second World War is more than the “Good War.”  If Grace had spent more space attempting to nail down the accepted narratives of war—and one might point to how, in fact, literature has offered an unbalanced reading of the Second World War by focusing on the Japanese internment or the Dieppe raid, at the expense of all the other Canadian wartime contributions—this would have strengthened her argument.  But I have sympathy for Grace, as that is not the point of the book and, for that matter, most historians do not agree on the many interpretations of the meaning of the wars.

Artists create new ways of seeing, new landscapes upon which to explore.  So does Grace in this thoughtful exploration of war and memory, of remembering and forgetting, and how the wars continue to haunt us still.  Landscapes of War and Memory will be of value to any historian studying the world wars.  Moreover, since literature has such enormous penetration into the social consciousness of Canadians—a Findley or Boyden novel will have far greater reach than any history book—it is necessary to consider what is being presented in the novels and plays.   Having praised the book, it is necessary to note that in this study, the literature leads the history.  That is not surprising, yet in discussing the impact of Dieppe, is it really best to delve into the complexities of that battle through Findley’s short story, “Stones”?  Findley, of course, can offer new ways of seeing the battle and its impact, but Grace too often draws upon these cultural products for the actual unfolding of events.

I offer one final thought on witnessing war, the central theme of Grace’s study.  In almost every single story, play, or film, those who survive the war are haunted, traumatized, and broken in body, mind, and spirit.  If we were to only read Boyden, Findley, David Macfarlane, or the countless other authors, the impression of war is one of mass disillusionment, unending horror, and scarring legacies.  Yet many service personnel had good wars.  It was the highlight of their lives as they served empire, country, and fellow Canadians.  They did their duty and they fought for what they believed in.  They returned to their country, to their community, and to their families, and set about building their lives.  Not everyone who came back from war was a broken shell of a man or woman.  Yet that is the impression when one reads our Canadian canon of literature.  While Grace has given us an important study of the literature of the world wars in the modern period, this is a book that venerates the text.  Yet what about the silences and gaps?  What about those stories that bear false witness?  Perhaps it takes an historian, who knows the past as well as how it has been depicted in literature, to bear witness to those voices silenced or those stories shunt to the periphery, and to draw out meanings that go beyond war’s impact on the personal.  There is room in the landscape of the world war’s constructed memory for historians and specialists of literature to range deep and explore new paths as they seek to broaden horizons leading from past to present, and from the here and now to the imagined future.