Review of Terry “Stoney” Burke’s Cold War Soldier: Life on the Front Lines of the Cold War by Frank Maas

Terry “Stoney” Burke’s Cold War Soldier (2011) offers an entertaining and candid memoir of the author’s service in the Canadian Army in the 1960s. He recounts his early years, enlistment, and basic training in 1964, and service in West Germany as a member of the Royal Canadian Regiment until 1968. There are very few similar accounts by other enlisted Cold War soldiers on regular peacetime duty, although there are some reminiscences sprinkled throughout regimental histories. This book fits best with Sean Maloney’s 1997 War Without Battles, an operational history of Canada’s land forces in Europe during the Cold War. Cold War Soldier is well written and sprinkled with many humorous anecdotes, and it affords valuable insight into the 1960s Canadian Army. However, this book is primarily focused on the rhythm of training and drinking in the army from 1964 to 1968, and this narrow focus restricts its value as a primary source or a teaching tool. 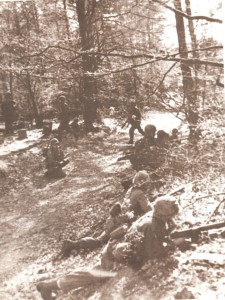 Soldiers from the Royal Canadian Regiment on a NATO exercise.

Burke was born in Dublin, Ireland, in 1947, and his family emigrated to Canada in 1957 and settled in Toronto. At the age of sixteen, his father kicked him out of the house for shoplifting from the Eaton’s department store, and Burke resolved to join the army as soon as he turned seventeen. He enlisted in the Royal Canadian Regiment in October 1964 as a private, and did his basic training at Wolseley Barracks in London Ontario, at Cedar Springs Rifle Range on Lake Erie, and Camp Ipperwash on Lake Huron. In October 1965, he and his battalion left to join the 4th Canadian Infantry Brigade Group in West Germany. Burke became a pioneer, specializing in mines and explosives and, after several years of service, passed the junior non-commissioned officer’s training course in 1968 and became a corporal. He also met his wife, Brigitte, a German woman working as a waitress in a town near the Canadian bases, and two children followed soon after.

Burke’s memoir does not appreciably alter the small body of work on the Cold War army, although he does reinforce the assessment that the army was first-rate. On numerous occasions he cites how many enlisted men were veterans of the Second World War or Korea, and the majority of officers were also competent and highly experienced. He also notes the high standards for spit and polish, and the demanding expectations for soldiers, especially from non-commissioned officers. These veteran troops made the 1960s Canadian army run like a well-oiled machine, although they could be quite intimidating. 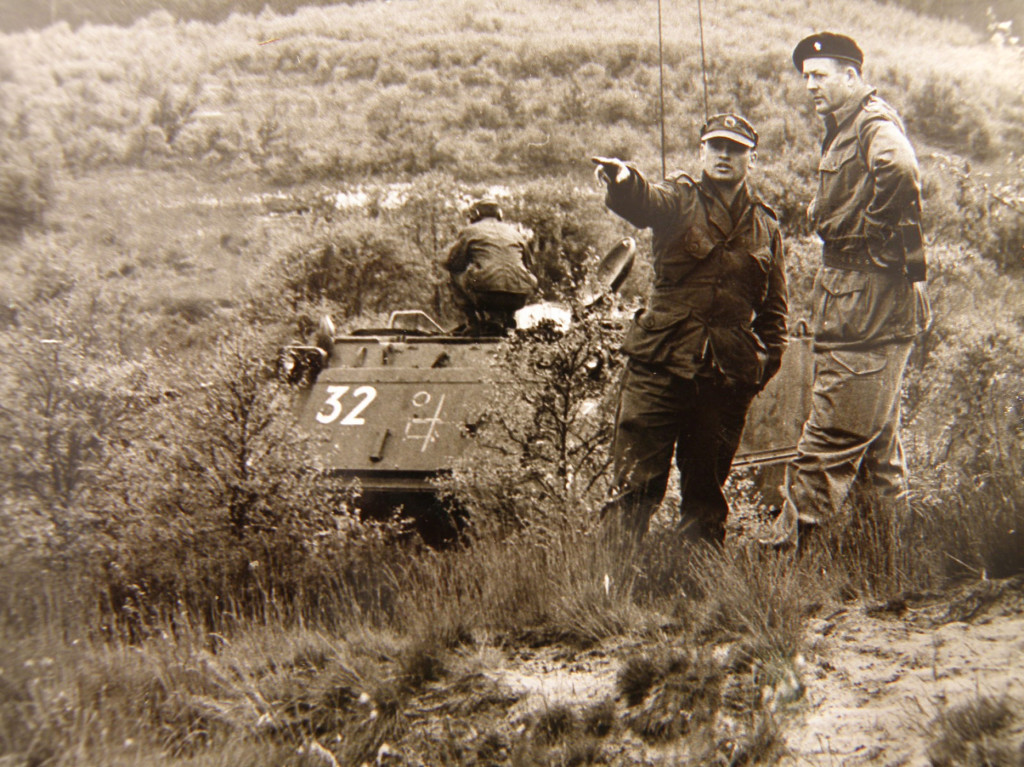 RCR troops in the field. The soldier in the darker uniform was likely an umpire for a NATO training exercise, tasked with assessing casualties after engagements. See Gwynne Dyer’s 1986 documentary on Canadian foreign and defence policies. Go to 6:45 to see some footage of Canadian troops on exercise in the 1980s, and an entertaining exchange between a Canadian soldier and a German
umpire.

The second feature that Burke outlines is the pace of life in the army. He recalled the looming Soviet tank armies in East Germany that were roughly twelve hours from the Canadian bases, and the tension of being prepared for nuclear warfare at a moment’s notice. He states that “most believed that the question wasn’t if they would come, but only when it was going to happen.” (p. 35) There was also the frenetic pace of training in the summer and fall at the British training area at Sennelager, and the exhausting three-week long annual Fallexes, when North Atlantic Treaty Organization (NATO) member states undertook realistic and wide-ranging exercises. This was contrasted with the boredom of life in the barracks, when the major activity was cleaning. For example, Burke states that “By early June of 1965 our lives had become a series of boring routines, punctuated by the rare bit of exciting training.” (p. 29) The other past-time was a night on the town, and Burke recounts an escapade to Amsterdam, and some adventures in Soest, closer to the Canadian bases. 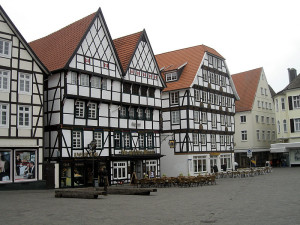 A partial view of the market in Soest today. The town was close to Canadian bases, and soldiers from the 4th Canadian Infantry Brigade Group would frequent bars and restaurants there.

The most interesting and valuable parts of Burke’s memoir are when he highlights how broad political and strategic changes directly affected the life of the ordinary soldier. In the last few pages of his book, he mentions how the reforms of the rank structure to accommodate the unification of the three services in 1968 angered many of the old sweats, some of whom left in disgust. (p. 176) Burke had been promoted just after this change, and he noted that many of the veterans were contemptuous of “Hellyer’s Corporals.” He notes how soldiers thought that Hellyer “was just another politician trying to make his mark at the military’s expense.” (p. 176) There is also a short, but refreshingly frank, discussion of NATO strategy. An officer was giving a briefing to the troops, and Burke asked why NATO forces were dug in so close to the Iron Curtain. It made military sense to position them farther back, and trade space for time against a possible Soviet advance. The officer responded, quite frankly, that it was to mollify the West Germans. They wanted to sacrifice as little territory as possible to the Soviets, even though it gave NATO troops little room to maneuver. (p. 74-5)

Cold War Soldier is also entertaining, and the author recalls many humorous anecdotes and observations. For example, cockroaches infested the mess at his base, and staff put cans of insecticide in the hall so that soldiers could keep them at bay. On one occasion, Burke noticed a rather large cockroach scuttle into a hole in the wall, and took his can of insecticide and sprayed a healthy amount into the wall to flush him out. Hundreds of cockroaches swarmed out of the hole and into the mess, and the room cleared out. He was on kitchen duty for weeks after that incident. (p.45) He also blew a hole through the colonel’s carpet with some training explosives during an exercise, but luckily, escaped punishment. (p. 78)

These anecdotes in Cold War Soldier make for enjoyable reading, and this book would be valuable for someone researching the social history of peacetime soldiers.[1] Unfortunately, this book’s tight focus on army life in the 1960s limits its value as a source for other avenues of research or as a teaching tool in high school or university classrooms. Burke is planning subsequent memoirs to detail his experiences on peacekeeping operations, and this reviewer looks forward to them, and hopes he will add more of his observations and insights into the army, the Cold War, NATO strategy, and Canadian defence policy. 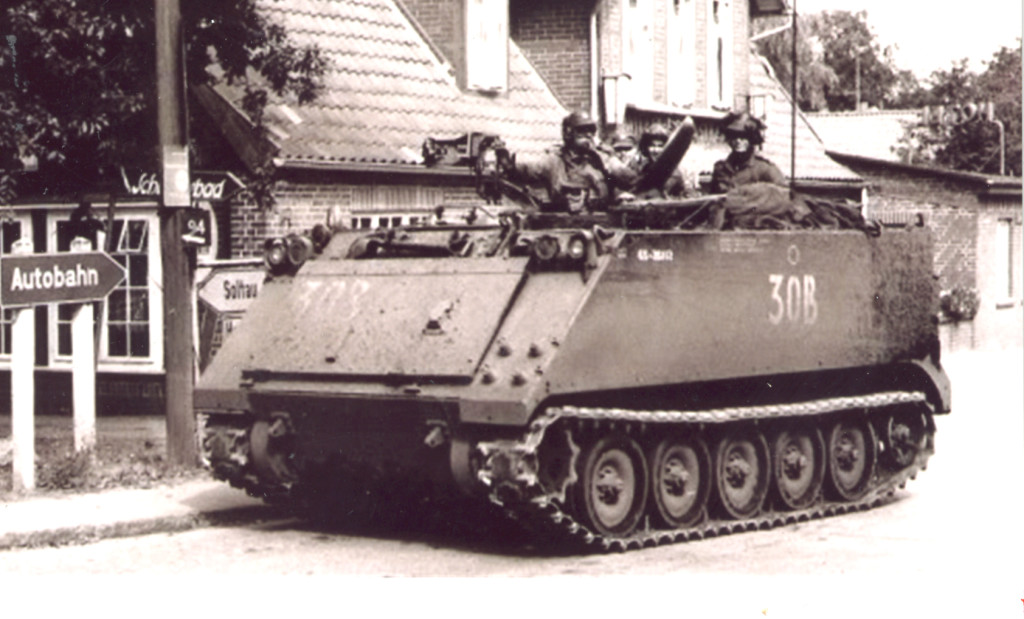 An M113 armoured personnel carrier. Burke and his fellow pioneers used these to transport themselves and their equipment, and became proficient at hiding them in villages and forests. While in towns, they would frequently trade their rations of chocolate for fresh food, normally eggs.

Note: all of the pictures (with the exception of the photo of Soest) were kindly supplied by the Royal Canadian Regiment Museum in London, Ontario. See http://www.theroyalcanadianregiment.ca/thercrmuseum/index.html for location and hours of operation, and like the museum’s Facebook page – https://www.facebook.com/RCRMuseum.

[1] It would be useful in conjunction with the Canadian War Museum’s collection of interviews – see http://catalogue.warmuseum.ca/musvw/Vubis.csp?Profile=Profile28&OpacLanguage=eng&RequestId=306_1 and search for “oral history”.