Review of Terry “Stoney” Burke’s Under the Blue Beret by Michael K. Carroll 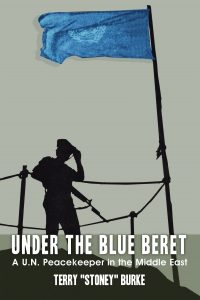 Good peacekeeping memoirs are few and far between and academic works on United Nations peacekeeping often focus narrowly on one specific mission. Terry “Stoney” Burke’s latest book, Under the Blue Beret: A U.N. Peacekeeper in the Middle East, covers his nine tours of duty in Cyprus, Israel, Lebanon, and Syria from 1970 to 1996 and provides a candid look at the realities faced by Canadian peacekeepers in the Middle East.

Interesting and engagingly written, the first half of the book covers his multiple tours deployed with the United Nations Force in Cyprus (UNFICYP) while the latter part deals with his time in the Middle East working with the United Nations Truce Supervision Organization (UNTSO). Burke provides enough introductory information for the reader to understand the purpose of each mission, but his goal is not a high level study. Instead he focuses on what he did and what he saw. He gives good descriptions of the very rudimentary living conditions with which the soldiers had to contend and what they did on a day to day basis. It is in the seemingly mundane details of military life that Burke’s story comes alive.

There are funny anecdotes about different individuals he served with, difficult working conditions, and how soldiers would deal with the stress of it all. Living and working in some of the observation posts in southern Lebanon were described as hell-holes; gloves had to be carefully shaken before use to protect against scorpions who might have crawled in looking for a respite from the heat; and there were also hairy camel spiders and venomous vipers which needed to be carefully avoided. Insects, bugs, landmines, and diseases could all be deadly. Peacekeepers were also witness to unspeakable carnage: dead bodies—sometimes children—the victims of mines, and colleagues being killed. Sometimes soldiers coped with a joke, sometimes they coped with a drink, and sometimes they suffered silently from what would now be diagnosed as Post Traumatic Stress Disorder (PTSD).

The perspective that Burke provides is unique in that he came up through the ranks. He travelled to Cyprus the first time as a corporal in 1970, yet after he had diligently completed his high school diploma through night school, by his final deployment with UNFICYP in 1983 he had been commissioned as a Lieutenant. Further advancement to the rank of Captain made him eligible for service in the Middle East.

After returning from his first tour to Cyprus, Burke’s battalion was immediately deployed to Ottawa to act as protective detail for federal politicians during the October Crisis of 1970. Six months in Cyrus and another three months in the National Capital Region was a long time to be away from his young family. The strain, Burke points out, was too much for many army marriages to manage. Burke’s wife, to whom the book is dedicated, is mentioned only occasionally, yet comes across as a true hero—and rightly so. Arriving in Canada from Germany for the first time in the dead of winter, young children in tow, not knowing English, only to have her husband deployed for the better part of a year was certainly not how Burke had intended his wife’s introduction to her new home. But such is life for military families, and the unspoken message is that military spouses are heroes in their own right.

The first half of the book dealing with his three tours in Cyprus hangs together better than the Middle Eastern section which left me wanting more. In part, the strength of Burke’s writing about Cyprus is that the reader is brought along with him. While tensions along the Green Line were ever present between the Greeks and Turks, the situation on the island evolved over time and the reader is able to experience this with Burke as he writes about 1970, 1974, and 1983. The book by its very nature of focusing only on his time on active UN duty is a little disjointed at times, though reading Burke’s earlier memoir, Cold War Soldier: Life on the Front Lines of the Cold War[1] might help to fill in some of the blanks and answer questions that arise from time to time.

Burke does not spend much time dwelling on the intricacies of the UN or their operational mandates, but a few issues are notable. The complete and abject lack of handover training in UNFICYP was shocking. Training in UNTSO was certainly much better, but being told that all he needed to know was in the manual in the observation post, as the soldier he was relieving was in full sprint to catch a plane off Cyprus, was perhaps not the best introduction for a young corporal to his new duties. That being said, Burke was able to manage quite well, a testament to the training Canadian soldiers received prior to their deployment. The value of UNTSO being deployed as an unarmed observer force is also questioned, albeit very politely, by Burke. Not being allowed to carry guns in a very dangerous part of the world puts peacekeepers in a very difficult situation. On the one hand, it helps to ensure that UN observers are not perceived as a belligerent force and hopefully provides some moral authority to their work. On the other hand, in lawless regions, these peacekeepers are at the mercy of anyone with a gun. This was made explicit in Burke’s first briefing where he was warned to carry some money, but not too much, because in all likelihood they would be held up at gunpoint at some point during the course of their duties. Burke also cannot help but wonder whether the ability to carry weapons may have saved the life of his American commanding officer, and friend, Colonel William “Rich” Higgins, who was kidnapped and later killed by a terrorist group in Lebanon.

Burke strikes me as the kind of person I like to interview for my research. While Under the Blue Beret is not intended as an academic history of peacekeeping, it will be of interest and value to researchers and the general public alike. Burke’s reminiscences of his time serving in UNFICYP and UNTSO provide great insight into the reality of UN tours of duty and reminds us, at times very poignantly, that UN missions can be boring, they can be difficult, and they can also be very dangerous.