Review of The Shadow of Torture and America in the Philippines 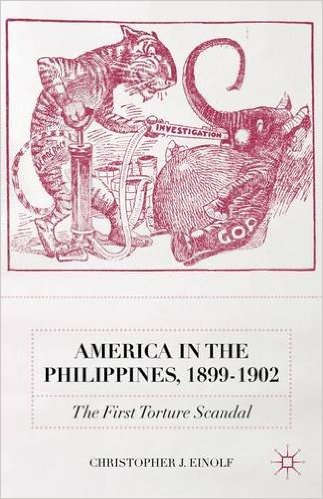 In 2003 Amnesty International and the Associated Press first reported that Iraqi prisoners had been tortured by members of the 320th U.S. Military Police Battalion in the Abu Ghraib prison. Subsequent media coverage provided American and international audiences with a detailed visual record of the torture victims and their perpetrators and sparked a widespread debate about the conduct of U.S. troops in Iraq.

The public debate over the sources and repercussions of such human rights violations also provoked substantial scholarly analysis of which the two studies under review here are but the latest examples. Both carefully researched and eloquently argued monographs approach the puzzle of why the United States would endanger the moral foundations of its polity and risk its international reputation as global advocate of human rights and democracy from similar perspectives. They criticise the lack of historical depth in the contemporary torture debate and seek to advance the discussion through historical contextualisation by providing case studies of U.S. military uses of torture.
Christopher J. Einolf, a professor in the School of Public Service at DePaul University, provides a detailed narrative of the torture debate during the Philippine-American War between 1899 and 1902. His analysis is centred on a close reading of the records of the Judge Advocate General’s Office and chronologically explores the evolution of the use of torture by American troops and the subsequent public discussion and its political repercussions.

While U.S. military regulations prohibited the use of torture, its practice commenced early on in the war, from the summer of 1899 on. Although its use was initially confined to only a number of areas in central Luzon, Einolf documents its subsequent spread to other areas of the archipelago. While torture encompassed a wide range of physical abuses of prisoners, its main practice was the so-called ‘water cure’ by which large amounts of water was forced down a victim’s throat, inducing a drowning sensation and intense pain from the swelling of the stomach and internal organs.
As the war evolved, torture became a standard practice throughout the archipelago by early 1901. Many of the perpetrators felt little inhibition discussing their deeds in letters home, which were often reprinted in local newspapers. The widespread use of torture was thus neither limited to exceptional cases nor was it carried out in secrecy. It even generated contemporary cultural commentary in songs, stories, and jokes.

As more and more information became available, widespread public concern over troop conduct abroad forced a congressional investigation into the matter. The critics of empire, however, were ultimately unable to utilise the political dynamic to end the U.S. occupation of the Philippines. The advocates of empire questioned the prominence of torture, referenced the brutality of the enemy, individualised responsibility for transgressions, and suggested violence as a deplorable but necessary component of the civilizing mission.

Einold’s careful examination of the witness testimonies underlines that many perpetrators interpreted their actions to be fully within the parameters of the rules of war and rejected the notion that the ‘water cure’ resembled torture. They viewed it as an overall ethical choice with little harm to the victim, designed to shorten a brutal colonial war.

The author measures these findings against the state of social psychological research on perpetrator motivations, in particular its emphasis on obedience to orders and the pervasiveness of negative emotions such as fear, anger, and revenge. Einolf concludes that the evidence of the Philippine case requires a new theoretical paradigm that emphasises the rational agency of low-level actors and their moral reasoning. He suggests that lower ranks of the U.S. Army first made the choice to use torture, which spread after superiors failed to stop them, ignored them, or encouraged the practice. This behavior was based on the conviction that torture was an effective ‘instrument’ of intelligence gathering that complied with contemporary moral and legal standards.
The book concludes that while the torture debate was ultimately contained and muffled it still had “… a strong immediate effect on the military, as many officers were investigated and court-martialed in 1902 and 1903” (p. 153). While he concedes that few careers were permanently damaged, Einold highlights that public scrutiny as evidenced in that the debate ultimately forced the military to temper its enthusiasm for imperial and military adventures.

The second book under review (The Shadow of Torture) provides evidence that such notions of ‘lesson learned’ might be premature. While both authors are driven by their interest to historically contextualise the current torture debate, Katrin Dauenhauer applies a long-term perspective and covers the wars in the Philippines, Vietnam, and Iraq over the past century. Dauenhauer, a lecturer of North American Studies at the University of Bonn, traces societal debates over torture during those wars and highlights their discursive interconnectedness and rhetorical linkages.
Her analysis of the Philippine-American War reaches conclusions about the effectiveness of the government’s ability to contain public criticism which mirror those made by Einolf. In contrast to his work, however, she is far less optimistic about the restraining impact of the debate on the military itself. She emphasises that memory of such violence in the United States but also in the Philippines quickly faded from public consciousness. They were suppressed and later projected onto the more recent memory of the Japanese occupation of the islands. The author demonstrates such ‘historical layering’ through an analysis of the 1963 movie Raiders of Leyte Gulf in which Japanese soldiers torture an American officer and assume the role of “stand-in for perpetrators of crimes committed during previous events” (p. 87).

During the Vietnam Era similar obfuscations about torture committed by U.S. troops persisted. While the March 1968 My Lai massacre caused public outrage and led to a widespread acknowledgement of the brutality of warfare in Southeast Asia, cases of torture received limited attention as the dominant narrative quickly interpreted U.S. soldiers as victims rather than perpetrators.

Dauenhauer argues that critics and supporters of the war in Southeast Asia followed a line of reasoning that had already defined the debate during the war in the Philippines. While the critics emphasised atrocities, supporters blamed military transgressions on the brutal enemy and weighted the violence committed against the perception of an overall beneficial context for America’s military intervention. Over time the dominant and ever-present war narrative became streamlined and distracted from U.S. responsibilities, as the discourse on torture and violence was increasingly dominated by the captivity experiences of American POW’s tortured by the North Vietnamese.

The 2003/2004 revelations about the torture of Iraqi prisoners by U.S. troops in Abu Ghraib produced a strong public debate within limitations similar to the ones in previous wars. While critics saw torture as a symbol of America’s imperial hubris and a challenge to the nation’s political core values, many Americans simply viewed such transgressions as individual breakdowns of military discipline. The government’s quick response in prosecuting those identified as perpetrators opened the way for a time-tested line of defense in which transgressions were identified as individual mistakes which should neither detract from the exemplary performance of U.S. troops nor the overall mission which was deemed beneficial to the Iraqi people.

Both studies provide substantial empirical evidence for the persistence of torture in U.S. military operations. Their historical angle does much to illuminate the rhetorical patterns and discursive strategies in public debates about torture. Such contextualisation of current discussions, implicit in Einolf’s analysis and explicit in Dauenhauer’s book, provides a potent counter-point to the notion that exceptional circumstances after the terrorist attacks on the United States in 2001 dictated exceptional measures. Abu Ghraib had precedence but will there be future Abu Ghraibs?
While the military establishment in the United States has undertaken great strides in improving the human rights education of its personnel, no one can predict for certain how troops will act in future unconventional wars. Furthermore, the recent release of information about the CIA’s extensive torture practices underlines that such human rights violations are by no means limited to the military alone.

Finally, while not the focus of their inquiries, both authors also make occasional references to domestic torture scandals in police and correctional departments. It is this proliferation of torture that highlights the ‘dark side’ of the nation-state and its inventory of power. While democratic states generally fare better in uncovering human rights abuses than autocratic regimes, they are not immune to such transgressions. On the contrary, the persistence of torture suggests that the practice might simply be so deeply embedded as state-sanctioned violence in the nation-state’s inventory of power that its external and domestic usage merely reflect two sides of the same coin.