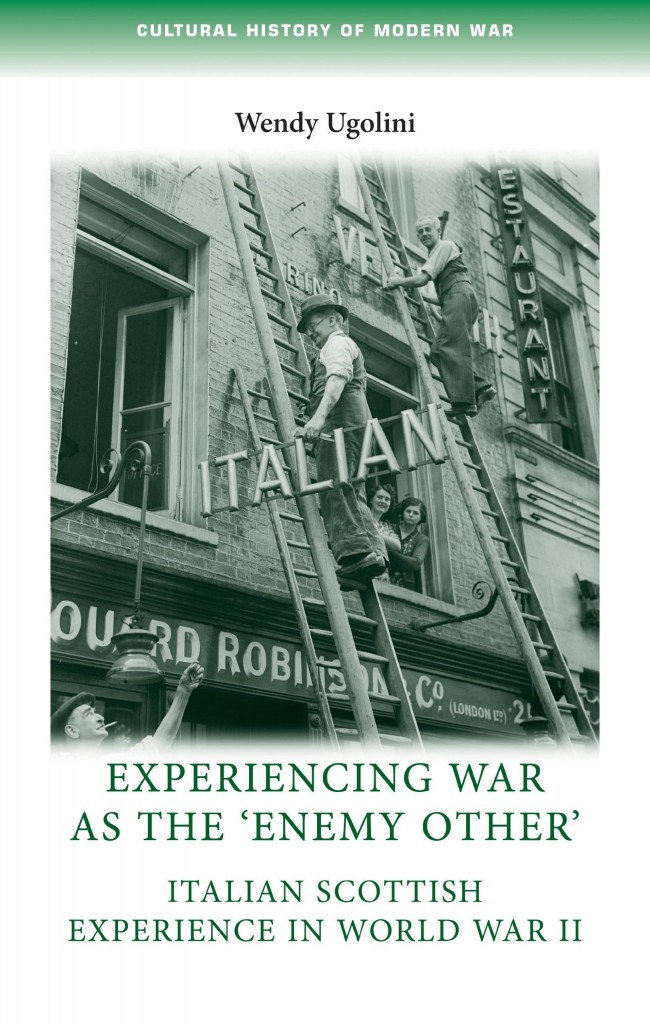 By Adrian Mitter, University of Toronto

Literature on the treatment of “enemy aliens” during the Second World War in English-speaking countries has grown significantly over the last twenty years, with a strong focus on internment. Wendy Ugolini’s thought-provoking study of Italians in Scotland during the Second World War, Experiencing War as the ‘Enemy Other’, is much more than a regional history of internment in the period.[1] The author strives to show that wartime internment should be analyzed in a much more nuanced way and in connection with other related wartime experiences of “enemy” minorities outside of the camps. The focus group of the study does not only include male internees, but also women and children who experienced outbreaks of anti-Italian violence and forced relocations. Furthermore, Ugolini looks at Scottish-Italians who served in the British army or auxiliary services. Her work is based on research in various British archives as well as forty-four interviews that she conducted with second- and third-generation Scottish-Italians.

Ugolini also critically examines the history of fascist Italian associations in Scotland, and is far from presenting Scottish-Italians as mere victims of societal domination. Her first chapter dismisses existing scholarly interpretations of the fascist clubs as apolitical social institutions. Instead, she tries to differentiate between the fully-fledged supporters of Mussolini and the members looking for opportunities to socialize and to improve their business relations. According to Ugolini, these distinctions were blurred during the war years, because all members of the “Fascio” were seen as equally dangerous enemies by the British government. Even more importantly, Ugolini points out that involvement in these groups was “a minority experience” among Scottish-Italians (p. 66).

In the following chapter, which focuses on internment, Ugolini succeeds in offering a more nuanced analysis by examining the differences of gender and generation among internees. Unlike the male experience of internment, which was largely perceived as heroic suffering in the Italian community, Ugolini points out that female internees were stigmatized as outlaws. In the third chapter on the anti-Italian riots in June 1940, witness’ testimonies allow Ugolini to cast doubt on existing interpretations.[2] The testimonies reveal that the riots were much more severe for women and children than was widely assumed. What the media described as “mobs of hooligans” who looted and destroyed Italian-owned businesses were often neighbors and people that the victims knew. Moreover, women and children suffered from the government order to relocate the Italian population twenty miles inland from the coast within a couple of days. The government’s fears of a “fifth column,” which caused internees and relocated families to lose their means of existence were, according to Ugolini, “a watershed in reinforcing [the Italians’] status as outsiders and undermining their sense of security within the wider community” (p. 139).

Paradoxically, internment or relocation of first-generation “enemy aliens” did not mean exception from military and auxiliary services for their British-born children. In the following two chapters, Ugolini looks at the history of the numerous soldiers of Italian descent within the British forces during the Second World War. She argues that in many cases, these soldiers “negotiated their identities during the war service” (p. 145). Here an all-Italian pioneer corps, whose former members she managed to interview, serves as a prime example for Ugolini who interprets the corps as a site of “positive ethnic identification for second generation Italians” that provided an “alternative site of ‘Italianess’ in Britain during the war” (p. 166). Similarly, in the next chapter, which focuses on soldiers of Italian descent in the British Army, she argues that the “accommodation of difference within a military setting encouraged the formulation of a distinctive dual identity that rested on identification with both Britain and Italy” (pp. 194-95). Various positive descriptions of non-combat encounters with Italian P.O.W’s by the interviewed veterans supports this argument. However, Ugolini could not find similar memories of fraternization among female second-generation Italians working in the auxiliary services. Many of her interviewees recalled being targets of violent attacks and/or harassment because of their ethnic origin.

Ugolini’s final chapter deals with the Arandora Star catastrophe in 1940. Heading for Canada and carrying more than one thousand internees and prisoners of war, the converted troopship was sunk in the Atlantic by a German torpedo. The event drowned and killed more than four hundred Italians. Rather than focusing on the disaster itself, Ugolini looks at the role of the tragedy in private memory and public remembrance. The author argues that “the constant emphasis on the Arandora Star tragedy within communal discourse, drawing upon the symbolism of victimhood, functions essentially to distract attention away from the diversity of Italian experience” (p. 235). Calling its importance for the Italian Scottish wartime experience into question, Ugolini states that less than half of the people she interviewed mentioned the disaster. Together with the internees and P.O.W’s the victims make up a group that is, in retrospect, labeled as “good Italians” and clearly dominates the memory of the Italian-Scottish experience in the Second World War. On the contrary, Ugolini points out that, there is “no public space in which to acknowledge the experiences of second and third generation Italians who died in the British armed forces” (p. 240). This last chapter, even if covering a very important topic related to the postwar Scottish-Italian experience, appears disconnected from the study, because it moves away from its focus on the wartime experience. Since the existing scholarship predominantly focuses on the history of the Arandora Star tragedy, this part might have worked better in one of the first chapters.

Generally, Ugolini’s book is very well structured and organized. It ends quite abruptly, however. Whereas each chapter closes with a short summary, a longer conclusion is missing at the end. This somewhat unusual structure makes the book read as a collection of essays rather than a monograph. Given that there is a well-written introduction that touches on Italian life in Britain before 1940, it is surprising that the immediate post-1943 phase is widely neglected by Ugolini. It would have been beneficial to the study, and surely interesting for the reader, to develop an understanding of how Scottish-Italians experienced the immediate postwar years, how “enemies” became neighbors again. Furthermore, the study could have included an answer to the question whether their wartime experiences caused a significant number of Scottish-Italians to leave the country.

Even though some questions remain unanswered, Ugolini’s work is immensely valuable as a study that adds multiple new perspectives to the history of minorities in Britain during the Second World War, moves away from the overemphasis on internment and P.O.W’s, and effectively challenges existing interpretations. Moreover, the author’s blending of different historiographical approaches and perspectives such as gender, military, social and oral history is remarkable. Ugolini earned the Gladstone History Book Prize of The Royal Historical Society for this unique study, and she fully deserved to win the award. Touching on a large variety of issues, this thought-provoking work will hopefully inspire other social historians of the Second World War to rethink narratives of homefront, internment, gender relations, and memory. This concise and well-written book does not only make an excellent introduction into the history of Scottish-Italians during the Second World War, but it should also be read as a stimulating case study of immigrant experiences in times of conflict, and is highly recommended to anyone interested in social military history.

[1]     Ugolini makes multiple references to a groundbreaking volume published by Canadian historians who questioned traditional narratives and pleaded to take gender, age and regional differences into account when researching the history of internment in the Second World War. See Franca Iacovetta, Roberto Perin and Angelo Principe, eds., Enemies within : Italian and other internees in Canada and abroad (Toronto: University of Toronto Press, 2000).