Review of Worth Fighting For by Tim Cook

Review of Lara Campbell, Michael Dawson, and Catherine Gidney, Worth Fighting For: Canada’s Tradition of War Resistance from 1812 to the War on Terror (Toronto: Between the Lines, 2015). Pp. 336. 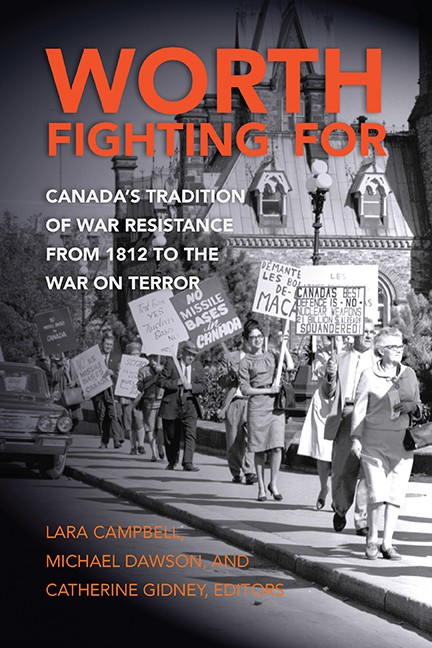 War is one of the factors that has shaped Canada. While wars can unify the nation behind shared goals of victory or survival, there are always those who abhor violence or do not believe the stated urgency of war aims. Canadians, working together in groups, through churches, political parties, or other non-governmental organizations, have throughout history sought to exert influence over governments to avoid war, to search out compromise, and to see Canada act as a force for peace.

Worth Fighting For is a collection of articles that explore the broad parameters of war resistance in Canada from the War of 1812 to the twenty-first century war in Afghanistan. The introductory essay by the book’s editors, Lara Campbell, Michael Dawson, and Catherine Gidney, lays out the unifying themes and argues that it is necessary to “recalibrate our understanding of Canadian history by documenting Canada’s long tradition of war resistance” (p. 2).

In all of Canada’s many wars there have been resisters, conscientious objectors, and pacifists moved by intellectual, religious and/or spiritual beliefs to oppose conflict. It has never been easy to hold true to pacifist ideals in Canada during war, where patriotic ardour can develop into a crusading mentality, and these articles provide evidence of how those opposed to war were often condemned for cowardice, a failure to be proper citizens, and even treason. At the same time, the war resisters have been largely unsuccessful in changing government policy in times of war, although there is more evidence of their impact in the interwar years and during the Cold War. The “Ban the Bomb movement,” nuclear disarmament, and the struggle to accept American war resisters (“Draft Dodgers”) are part of the successful way that Canadians exerted pressure on successive governments that led to reversals of policy. In other cases, the protests of groups ranging from Voice of Women to the Peace Churches had little concrete impact, or, perhaps more generously, it is difficult to link the various forms of protest to changes in Ottawa.

The seventeen articles in the collection begin with two by Jonathan Seiling and Ross Fair that examine the Peace Churches and pacifist sects during the War of 1812. Neither essay is well developed nor based on a broad reading of primary sources, and the authors fail to make the case for how these groups had any impact on the strategy or conduct of the conflict. The strange war on the East Coast, with British colonies continuing to trade with American northern States, would have provided a better means of analysing those who opposed the war and why. Three articles by Amy Shaw, Geoff Keelan, and David Tough on dissent during the Anglo-Boer War and during the First World War hit their stride and offer different ways of thinking about opposition to those conflicts in the heady patriotic environments of an English Canada that supported the Empire, no matter the sacrifice or excess. An interesting trend with the three articles suggests that opposition in these wars was often mixed with anti-empire sentiments. However, Tough’s claim that the “resistance … is a source of democratic legacy” seems more than a wishful reading of the past and his claim that since Canada was not a true democracy that the young men who served in the Great War were “therefore, not defending democracy,” is a ham-fisted analysis of what Canadians believed at the time (p. 68).

Cynthia Comacchio offers a sound overview of opposition to the cadet movement from 1920 to 1950 that explores the interplay of youth, gender, masculinity, and militarism. There were 40,000 cadets in Canada before the Great War, which is often held up as a large number, but after the terrible slaughter of 1914–1918, the number of cadets in 1926 had risen to 112,000 (p. 84). What this means is not fully teased out by Comacchio in this otherwise fine article. The Second World War contains two marginal articles on the Canadian Historic Peace Churches and Canadian Pentecostal students that fill a niche but are not terribly useful for a broader understanding of war resistance during that horrendous conflict against the fascists. Surely a wider study of how pacifists grappled with the “Good War” against Hitler’s genocidal policies would have provided greater insight.

The remaining nine chapters explore various peace movements during the Cold War and up to the War on Terror. Many of the authors draw upon transnational scholarship to explore how individuals or groups sought to affect change. But too often the authors reach beyond their evidence and in only a few cases did Ottawa seem to affect policy changes because of this pressure. However, Braden Hutchinson’s article on activism against war toys does show how committed groups were able to change how war toys were marketed and sold during the 1960s, and it is a strong addition to our understanding of the impact war (or antiwar) on society. Two articles also explore the impact of teaching war in the classroom. Peace protests and the support of American soldiers fleeing their country offer new perspectives on the Canadian resistance to the Vietnam and Iraq wars.

Besides the specific arguments laid out in the articles, there appears another unifying methodological approach. Almost all of these authors wear their politics freely. The book itself is an academic push-back against the Harper government’s slow but steady rebranding of Canada’s symbols, heritage, and history from 2006 to 2015, with its turn to a more militarised reading of the past as seen through the emphasis on the War of 1812 bicentennial commemorations, the rewriting of the citizenship guide, and other supposedly acts. I wonder about the obvious political bias of all the writers. With such prominent websites as Activehistory.ca urging historians to use their skills and knowledge in defence of ideals or agendas, as opposed to, perhaps, a more antiquated view of the historian as seeker of truth, lower rather than upper case, or attempting to be objective, is this where the historical profession is headed? This may be troubling for some historians and scholars, and it certainly deserves some sort of deeper discussion than that which is provided in this book. The ramifications for activist history bears further discussion within the historical profession.

While the articles are uneven in quality, together they offer a strong case in exploring resistance to war, and this is a useful book that could be used in the classroom as a complement to more general studies of Canadian military history.