Contemporary Russia and the State of Remembrance: Reflections on War and Memory by Brendan O’Driscoll

Brendan O’Driscoll is a student at Wilfrid Laurier University who participated in HI411, a history seminar that traveled to Russia last June.

The following reflections and subsequent posts are the final product of a ten day trip to Moscow and St. Petersburg with Dr. Leonard Friesen for HI411, a fourth year history seminar focused on the study of war and memory in Russia. As part of our time in each city, my fourteen colleagues and I explored each cityscape as a site of memory in itself. This task included visiting central areas such as Red Square, but also locations little known to tourists, such as Russian cemeteries and war memorials. The following pages are meant to convey both an argument, and my reflections on the experience.

In his short essay, “An Open Door to a Better Future,” Canadian scholar Jonathan F. Vance makes a simple but effective argument about the Canadian memory of the Second World War. As the First World War produced little tangible benefits and a sense of disillusionment, Canadians turned to an idyllic, usable past to find solace and meaning amongst rising political strife, unemployment, worrisome inflation, and an overall uncertain future. The Second World War, by contrast, witnessed everywhere the fruits of a post-war victory; there was full employment, political stability, a social safety net, and a burgeoning consumer economy.[1] For most Canadians, therefore, a post-1945 world did not require a turn to the past. For those that did revisit the war, Vance argues, the language and model of the First World War provided an already recognizable framework.[2]

Vance’s argument puts forth an important idea about the nature memory – that contemporary context matters. The environment in which one remembers the past is a significant factor in how that past is actually remembered. When I returned from Russia in the middle of June, I was asked by a number of relatives what my pictures of shopping malls and apartment buildings had to do with the study of history. Without stating it directly, their questions implied that the status of contemporary Russian society was simply a passing interest during my stay there, and that my actual concern was solely with the history, an entirely separate realm. But much like Canada after the First World War, the fall of the Soviet Union had created an environment in which remembrance took on new forms. Since memory has a significant presentist aspect to it, there was always a sense that, while in Russia, the state of contemporary society was deserving of our attention. Surely the grand shopping malls, exorbitantly priced high-rises, and noticeable disparities in wealth had everything to do with how Russians remembered, just like in Canada. The following reflections portray my own experience of contemporary Russian society, and also explain how recent changes in Moscow have affected the performance of remembrance. 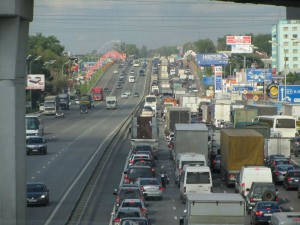 Congested Traffic on the Highway to Moscow

To the perceptive traveler of Russia, the first bus ride from Moscow Airport to the centre of the city is immediately telling. As our experienced tour guide, Olga, made sure to point out, Russia is a society undergoing great changes, for better or for worse. This change was immediately noticeable. On the outskirts of the city expensive apartment buildings are being constructed which ordinary Russians can only hope to afford. These can be seen over the horizon of dachas, or summer homes, which the wealthiest of Muscovites flock to on their holidays. The highway from which these prime pieces of real estate can be seen is also congested and chaotic. With no visible rules of the road or adequate lanes available for the volume of traffic, it feels as though Russia is struggling to keep up with itself in terms of growth and expansion. The presence of Ladas, moreover, an old soviet-style automobile, attests to the newness of this type of traffic, and the rapidity with which apartment buildings are springing up on the horizon. For someone like me, born in the year 1990, the Soviet Union never existed. But for those driving Ladas, the past must seem so recent. As former soviets citizens, they waited years to receive their Ladas; now their cars are worthless and the new real estate on the horizon of Moscow is far from their grasp. 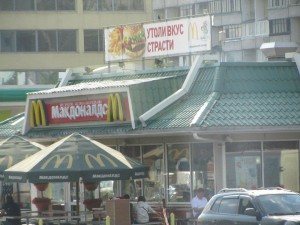 A Russian MacDonald’s on the highway to Moscow

These noticeable changes on the outskirts of Moscow produce a number of stark contrasts. Ladas, for instance, appeared out of place amongst the Mercedes Benz and stretch Hummers. Buildings that are clearly soviet-style looked odd amongst the field of expensive dachas and the growing skyline of new-age apartment buildings. Pictures of Lenin, moreover, stand in opposition to advertisements for European cars and North American products. The tell-tale sign of globalization, a Russian MacDonald’s, also stood along the highway next to gas stations and convenience stores. These stark contrasts, even along a simple stretch of highway, render the past as something that is immediate. The condition of the present, moreover, is also made to appear rapid, uncertain, and unstable. For former soviet citizens like Olga, this produces a feeling of nostalgia and even a sense of solemnity. The Soviet Union, whatever its merits, was a place of certainty and predictability; in terms of memory, it was also idyllic and consoling. A simple stretch of highway, therefore, is also a place of recall and memory for those who are shaken by change. 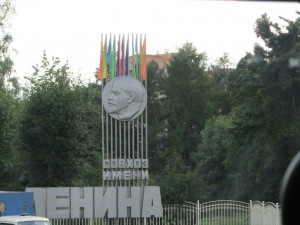 Icon of Lenin on the Highway to Moscow

These environments of noticeable contrast and change, however, can also have the opposite effect on Russians of a different generation. Whereas older Russians like Olga may become nostalgic in search of certainty, younger Russians appear more prone to amnesia than remembrance. When encountered with a picture of Lenin beside the symbols of American consumerism, older Russians may experience troublesome feelings about their position in time or their identity as a person. Younger Russians, however, appear to have already decided which icon is more desirable. It was clear while in Moscow that many Russians, particularly Russian youth, would rather shop than deal with a complicated and burdensome past. Despite a certain aesthetic appeal, Muscovites live in a city where the present is constantly historicized. The very centre of Moscow, Red Square, is a conglomeration of historical buildings representing state power, lost soldiers, and remembrance. As one young lady told my colleagues and me, she found the entombment and preservation of Lenin to be creepy and could not understand the appeal 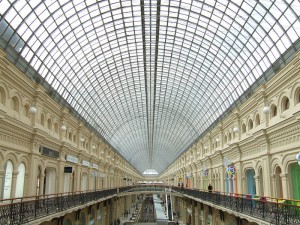 Upper Level of the GUM department store in Moscow

There is an unfolding culture, therefore, of indifference and amnesia. This is represented most clearly by the GUM department store, a multilevel, underground shopping mall that illustrates a growing consumer culture and the demand for foreign products in Russia. Ironically enough, however, this building sits at the centre of Moscow on Red Square and is positioned directly across from Lenin’s Mausoleum. The building itself, moreover, has been used for multiple purposes under both the Tsars and the Soviets. It is itself a historic space despite its new function as a temple-like shopping mall, and the embodiment of a cultural paradigm based on amnesia.

Concern for the past, however, cannot simply be split along a generational divide. Russians of all ages interact with sites of memory on a daily basis, either consciously or unconsciously. Red Square and the surrounding area, for example, is a multifunctional space filled with multiple layers of meaning. It is a tourist attraction, a crowded public space, a place for relaxation, remembrance, state power, and shopping. The motivations and activities within that space are many and difficult to discern. But if you pay attention, memory and commemoration are easy enough to spot. Wedding parties, for example, traditionally walk through public spaces and visit the various monuments and sacred icons. One married couple, we witnessed, placed a bouquet of flowers at the Tomb of the Unknown Soldier, a monument beside the Kremlin Wall that is staffed by guards who rotate every hour. Subsequently, the couple had their picture taken in front of the Eternal Flame, a constantly burning fire in commemoration of those who have fallen for the Motherland. 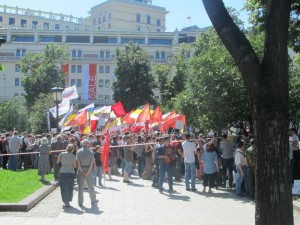 Labour protest in Moscow, next to Red Square

On the subway system, Russians of all ages can still be seen carrying bouquets of flowers to the graves of their relatives. These graves may also be placed within a space dedicated to the Great Patriotic War. Monuments to the Revolution, moreover, mostly found in the Moscow Metro system, are rubbed by passers-by for good luck. This is done so frequently, that the bronze on many statues show discoloration and wear. Recent protests also, mainly those contesting the election of Vladimir Putin, are conducted in spaces of historic significance and meaning. Not only are they conducted in an open, public space, but they are also lent legitimacy and force by association with the past. For example, while in Moscow, we witnessed a labour protest just outside of Red Square. This particular rally was held around a courtyard statue of Karl Marx, just across from the Bolshoi Theatre. Whatever its effectiveness, the protesters clearly sought to use the space to increase their own significance.

Russia, therefore, is a place that engages with its own past in a variety of different ways. Recent changes since the fall of the Soviet Union have made remembrance a contentious, unavoidable, and unique issue. Whereas older Russians tend to find rapid change a reason for nostalgia, younger Russians tend to feign indifference and go shopping. Remembrance, however, has an inescapability to it. Russians of all ages can still be seen interacting with spaces such as Red Square, a place of multiple meanings and multiple functions. It is still a place of weddings, protest, state spectacle, and individual leisure. Amongst the ads for foreign cars and lingerie there are the noticeable vestiges of Russia’s past. If we are to understand this past, its shifting position in relation to the present must be understood.

Note: all pictures in this essay were taken by the author