“Sexual Violence and Stigmatization in Somalia” by Andrea Hall

Sexual assault is not a problem that is confined to conflict zones. Recent highly publicized cases in Steubenville, Ohio and Halifax, as well as hearings into sexual assault in the U.S. military, prove it’s a disturbing trend even in relatively peaceful, developed nations. The chaos of a war zone, however, provides a greater opportunity for perpetrators to commit rape and a lack of law and order creates a situation where there is no recourse for justice. The Somali conflict spawned an epidemic of sexual violence that spilled over its borders and affects countless women.

Sexual violence has historically been used as a weapon of war, a means for one side to dominate another. In Somalia, this has been documented in the Machel Study from UNICEF. Those actively participating in physical combat are largely men but in a war zone no one is immune to violence, and in fact the departure of men from families and villages leaves women more vulnerable to sexual attacks. The disintegration of families and communities also leaves women without a network of support.

The significance of the clan system in Somali society contributes to this vulnerability. After the fall of Mohammed Siad Barre’s regime, and the resulting lawlessness, clans were often pitted against each other in a violent fashion. This made women a target – men would attack women from opposing clans. As one scholar notes, the “Somali civil war reduced all women to representatives of their clans’ honor. Violating their integrity and subjecting them to the extreme violence of rape and torture became a key weapon of the war.”[1]

March 2013 – Somali women consult a medical officer serving with the African Union Mission in Somalia (AMISOM) at a free Outpatient’s Department medical clinic. The clinic has continued to treat civilians affected by the violence surrounding extremist group Al-Shabaab in and around Mogadishu over the years.

This is also demonstrated by cases where the reverse occurs; there are documented instances in which men have attacked women to rob them, but did not cause any physical or sexual harm if they shared a clan.

Rape can also contribute to the spread of sexually transmitted infections, including HIV.  A conflict-ridden country such as Somalia does not have the resources to provide the kind of health services needed to cope with this issue, nor does it have adequate services to assist victims dealing with the psychological damage from a violent sexual attack.

The consequences of rape go beyond physical harm and mental anguish. In Somalia, stigmatization derived from an intensely conservative culture factors largely into the long-term detrimental effects for victims of sexual violence. Societal shaming of the victim undermines the ability of a woman to seek medical or legal assistance and often leads to her being cast out of her family or community, denying emotional and psychological support.

The expectation in much of the country is that women will retain their virginity until marriage. Women who don’t live up to that standard, through choice, coercion or assault, are punished as outcasts – they are “socially dead,” leaving them with little hope to support themselves or marry and start a family.

In some cases, this standard is used against women, through the practice of forced marriage. Men abduct women, marry them by force, and send them back to their families only after they are pregnant, effectively sealing the marriage. There have also been cases of women being taken as sexual hostages, where men invade villages and take women into captivity to provide both domestic and sexual services.

In addition to sexual assault, conflict often intensifies poverty, which can lead to sexual exploitation and trafficking. Women turn to prostitution as a means to support themselves. In parts of Somalia, men have turned to piracy and there is an influx of wealth for that small group that can be used to hire women for sexual purposes. There are also a large number of foreign workers that have descended on the country, and may use their influence to exploit women or provide a lucrative market for sex workers. 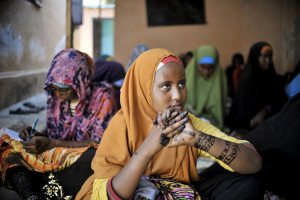 Apr 2013- A girl at the Mother and Child Health Center in Mogadishu, Somalia, during a visit by Zainab Bangura, the Secretary-General’s Special Representative (SRSG) on Sexual Violence in Conflict. The SRSG also visited Internally Displaced Persons (IDP) camps and women’s shelters as part of her visit to Somalia.

The fear of an attack, sexual or otherwise, can also create a vicious cycle that perpetuates poverty. Women fear to leave home for work, or fear to go out and seek food or water. The threat of sexual violence alone therefore aggravates other problems.

The prevalence of female genital mutilation (FGM) in Somalia means that for many women who suffer through rape there is additional aggravation and health complications. Female genital mutilation is a practice generally completed during childhood. There are different forms but the most severe involves the removal of the clitoris and the labia minora, and parts of the labia majora. The skin is then stitched together leaving just a small hole for urination and menstruating. The UN estimates that 98 per cent of girls in Somalia undergo FGM, the highest rate of any country in the world. Some women and girls who have undergone this practice and subsequently been raped report that attackers have first used a sharp object such as a razor blade or bayonet to allow penetration.

Many assaults on Somali women don’t actually take place in Somalia – refugees fleeing the country make easy targets.  By 1993, two years after the Barre regime collapsed, 300,000 refugees fled the country, 80 per cent of which were women and children. Many ended up at the Dadaab Refugee Camp in Kenya, which as of July 2011 housed more than 439,000 people according to the United Nations Human Rights Commission. Living in the camp does not provide any sort of protection against sexual violence. Women are often forced to leave the camp in search of firewood or water and are attacked while outside the camp’s boundaries.

Because of the taboo nature of sexual violence in Somalia, getting accurate statistics on the prevalence of rape is difficult. The UN suggests that in refugee camps as many as ten per cent of women have been raped. One author conducted a small study in which she documented 192 cases of rape, against Somali women between the ages of 4 and 56, which helps shed light on the range of victims.[2] More than half of these attacks occurred in Kenyan territory, including seven assaults by Kenyan security officials. These cases pose greater difficulty in terms of reporting and seeking justice – the people to whom women are expected to report assaults were the perpetrators, leaving women fearing retaliation if they made the attack known. When impunity for perpetrators, and public shaming, retaliatory violence or even convictions for victims are the norm, it is no wonder many cases of rape go unreported. 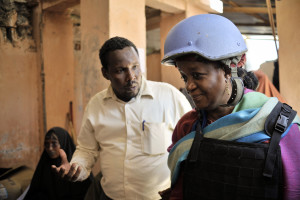 Apr 2013 – Zainab Bangura, the Secretary-General’s Special Representative (SRSG) on Sexual Violence in Conflict, during her visit to the Mother and Child Health Center in Mogadishu, Somalia. Ms. Bangura also visited Internally Displaced Persons (IDP) camps and women’s shelters as part of her visit to Somalia.

While the situation remains dangerous for women in refugee camps and in Somalia, there is hope of change. In April of this year, the United Nations sent an envoy on sexual violence to the country, saying the Somali government had “expressed openness to developing a framework of cooperation to address sexual violence.”

This came a month after a Somali appeals court overturned the conviction of a woman who accused security forces of raping her and was subsequently charged with insulting and lowering the dignity of a national institution.

It may certainly feel like a very small victory to have such an absurd charge and conviction overturned. For the founders of Sister Somalia, the first rape crisis centre in Mogadishu, the initial conviction represented an enormous step backwards. Sister Somalia was established not only to provide healthcare and emotional/psychological support, but also to lessen the stigmatization facing victims of rape. The conviction that woman faced amplified the fear of women involved with and seeking help from Sister Somalia of the consequences they too could endure just by bringing sexual violence to light. One of the founders of the organization, Fartuun Abdisalaan Adan, wrote in a column for Huffington Post in February that “At this time of fragile hopes, this case is sending the worst possible message to the women in my community.” The foundation itself however is a sign of change, and a promise of hope for women who have suffered terribly.

The lack of law and order in a conflict zone lends itself to a dramatic increase in cases of sexual violence. In 2011, a Thomson Reuters poll named Somalia as the fifth worst country for women, while Somalia’s own Minister for women’s development and family welfare said she expected it to actually top the list. Women who face sexual violence in Somalia often suffer as outcasts, shamed by their families, and given few options in terms of both medical and legal assistance. Women are targeted as members of opposing clans, or as vulnerable parties with no means of self-protection. They can also be forced into poverty and desolation, leading to sexual exploitation. It is interesting to note that while conservative Islamic society in Somalia is largely responsible for the shaming of victims in rape cases, many women lean on their Islamic faith when there is nowhere else to turn. The violence they face “could be endured only by embracing religion: the attainment of purity in an environment that denied them their basic human and Islamic rights.”[3]