“Somalia never left from my heart and from my mind”: Reflections of a Female Refugee by Andrea Hall 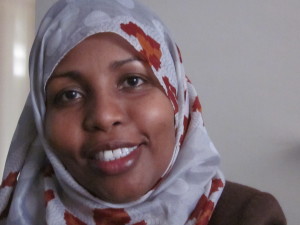 Shukria Dini fled from Somalia at the age of 22 and has now been living in Canada for 17 years.

Fleeing Somalia at the age of 22 could have been the defining moment in Shukria Dini’s life.

“The country where I was born and called home did not exist. It was on fire everywhere and people were killing one another,” she says.

She had completed high school and was waiting for a post-secondary placement when Mohamed Siad Barre’s regime collapsed and Somalia was thrust into two decades of conflict with no central government.

But more than 20 years later, Shukria has proved she wasn’t willing to let her future slip away. She’s now Dr. Dini, graduate of three Canadian universities, and founder of the Somali Women’s Study Centre, a research centre headquartered in Nairobi.

Shukria was born in 1969 (the same year Mohamed Siad Barre seized power) and was raised in Mogadishu, Somalia’s capital. Given the negative press that Somalia often receives (the international peace envoy to Syria recently warned the country, also overrun by violence, risks “Somali-isation” if the conflict doesn’t improve) it is hard for anyone in other parts of the world to imagine living a peaceful and happy life in the country.

But Shukria describes a happy childhood surrounded by extended family and close neighbours.

“It was fun, it was peaceful…everybody knows your name,” she says. “On Fridays we would go to the beach and swim.”

Education has also changed dramatically since Shukria’s days at school. Initially with Barre’s revolution in 1969 came an education revolution – hundreds of schools were built and a literacy program was put in place. Now UNICEF says between 2005-2010 female attendance at primary school was just 15%, and that number drops by almost half for secondary school.

Shukria looks back on her school days fondly, remember the khaki skirts that were part of the uniform and enjoying time with classmates. That’s not to say her early life was without its struggles. When Shukria was 4 years old, her mother died, and she went to live with her grandmother, who stayed home with her, and her grandfather, who was a nurse and farmer. When they died seven years later, she went to live with her uncle.

She says her father was part of her life, but suggests for cultural reasons her grandparents thought she would be better off living with them, as an only child of a widower. Later her father, a journalist, spent time in prison – even before the conflict Somalis didn’t enjoy freedom of expression.

But Shukria’s life was entirely altered with the collapse of Barre’s regime in 1991, and the ensuing civil war. She fled to Nairobi with family friends as a refugee – near the beginning of a flood of refugees that the UN says has topped the one million mark.

Despite the fear and insecurity, she invested her energy in volunteering with the International Committee of the Red Cross, which led briefly to a paid job tracing family members and helping with reunification. Still, she hadn’t lost the dream of more education, and had her sights set on one place.

“I wanted so badly to go to the United States. America is the place to go,” she says, laughing as she recalled that, “no other country mattered.”

One Friday on her way to the American library in Nairobi, a young man told her about World University Service of Canada, an organization that could provide her with a scholarship to a Canadian university. She changed course from the library, spent the little bus fare she had, and set off in search of WUSC. A year and a half later she was approved, and headed to the University of Winnipeg. She arrived in September 1993. Coming from Somalia, it’s not surprising that she says, “It was cold already.”

Her field of study may also come as no surprise.

“All the Africans, we’re crazy about politics,” she says with a laugh. “I thought if I get a degree in political science, perhaps I will take part in the efforts to rebuild Somalia.”

Shukria maintained that thinking throughout her 17 years in Canada. She directed her education and research towards Somalia. The scholarship only lasted one year, after which she funded her education by loans. From Winnipeg she moved to Halifax, where she spent three years at St Mary’s University for an MA in International Development. She then arrived at York for a PhD in Women’s Studies.

Shukria felt more at home in Toronto, especially as she got involved with Somali community. In addition to her schooling, and later teaching, she volunteered as an interpreter with the Immigration and Refugee Board. She also assisted newcomers with finding housing and schools.

“Just as an individual, if someone says ‘I want to go to the main housing office,’ I know I can meet them, take them,” she explains. “It’s part of the community mind…people will say ‘we know each other, there’s this family who needs help, who can take these newcomers to specific offices?’”

Shukria spent the better part of a decade in Toronto. She also returned to Somalia for the first time in 2005 to conduct research for her dissertation on the role of Somali women in NGOs.

When she finished her doctorate in 2010, Shukria knew it was time to go back indefinitely.

“Somalia never left from my heart and from my mind.”

She also had an idea, born out of her own PhD research, to found the Somali Women’s Study Centre.

“I was frustrated I could not get sufficient literature on Somali women,” Shukria says. “The few literature I came [across] portrayed women as vulnerable, victims.

She returned to her childhood home of Mogadishu for the first time in 20 years, an emotional experience that had her in tears as the plane hit the tarmac. She had hoped to make the city home again, but two weeks there showed her it could not happen and she settled in Nairobi.

She now splits her time between the countries, with the hope that one day Somalia will be capable of housing her organization. Still, she’s not waiting for that time to come.

Since forming the Centre, Shukria has been actively pushing gender awareness. It’s used for research, education, and through forums sometimes brings together different grassroots groups and government workers.

SWSC is taking baby steps, just like the country. Recent elections in Somalia saw women enter parliament, though not as many as Shukria would like. In a December 2011 constitutional conference, convened by the Transitional Federal Government and facilitated by the United Nations, it was agreed that women would make up 30% of parliament when elections came around. In the end 38 women became MPs, making up about 14% of parliament.

It wasn’t an election like we would think of in Canada. Clan elders nominated parliamentarians who were then ratified by a technical selection committee. With her political science background, persistent nature, and dedication to effect change in her country, Shukria seems like an ideal candidate. But in some ways it’s those same reasons that made her shy away from the idea.

“At this time I didn’t want to be selected by clan men to represent Somalia. I hope that Somalia will reach a time, perhaps in the future, when all the institutions are fully established and then there will be an election process.”

The slight against women in the elections is particularly aggravating because she says women have taken on more responsibility in the last two decades as men fought and died in conflict.

“[Women] have been the backbone of this country, they have been the ones who have become the primary income earners for their families and gain leadership in the NGO sector,” she explains. “And now you tell them women have no place in politics?”

So for now Shukria will continue her work with the Centre, proving the importance of women to Somali life, the power they can have in politics, and the fact they’re not all vulnerable victims. It’s something she’s demonstrating not only with her research, but also with her own story.

Shukria, despite her obvious perseverance and work ethic, is the first to say she had some breaks.

Shukria is one of several remarkable women from the horn of Africa to succeed despite incredible hurdles, and there are many more who have suffered unimaginably from the protracted conflict.  Her  story is the first in a multi-part series on women in the horn of Africa, appearing monthly from LCMSDS at www.canadianmilitaryhistory.ca. We hope this feature will help spread awareness and bring their stories to light.