Byers and Webb’s recent critique of the Victoria class submarine programme “re-surfaces” old concerns about the strategic requirement for these weapon systems in the inventory of the RCN. Their opposition to submarines is based purely on tactical considerations surrounding the current strategic environment. A strategic consideration of submarines is focused, rather, on the options that the system provides the Canadian government with in an unknowable future security environment.

As I noted in the previous blog entry, Canadian concerns over submarines are actually quite old. The navy lost its first submarines at the close of the First World War, and as late as the 1950s, the Canadian government was still questioning whether they should ever be replaced. 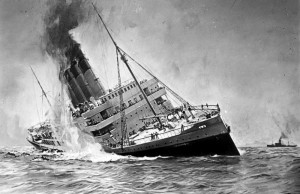 Of course, the submarine has long had a sinister reputation stemming from the major global conflicts of the twentieth century. The vessels themselves, with their black hull, are visually menacing. The unrestricted submarine campaigns conducted by the German navy in both world wars cemented in the public’s imagination the inherent “evil” of the submarine. The sinking of vessels like the Lusitania on the 7th of May 1915 with the loss of 1,201 persons, all of them civilian passengers and crew, helped establish the essential horror of this weapon. Later, the long Battle of the Atlantic with the steady loss of merchant mariners, in equally horrible circumstances, reinforced this image. In Western nations, it is often forgotten that similar horrors were suffered by German and Japanese sailors in the unrestricted submarine operations conducted by allied navies. Submariners have often embraced this reputation: on the return of HMS Conqueror following the end of the Falklands War in 1982, crew members flew the Jolly Roger on its periscope along with a broom to indicate a “clean sweep” of all its targets, reviving a tradition from the First World War.

In what seems to be a recurring pattern, Canadian qualms over submarines were raised even before the close of the Cold War and the debate over the so-called peace dividend. In 1983, the Senate Subcommittee on National Defence in its report Canada’s Maritime Defence noted “[Submarines’] major disadvantage is that they are quintessentially weapons of war and would be able to contribute little to the accomplishment of the ancillary duties assigned to MARCOM [Maritime Command] in peacetime.” A decade later, the Canada 21 report argued:

In the new strategic context, there is no obvious need to maintain the wide range of air, ground, and ASW conventional forces needed to repel an attack because it is difficult to conceive of any military power with the desire or ability to attack Canada.

On the then proposed Upholder purchase, the Globe and Mail editorialised “[e]ven if we could afford the $800 million [cabinet] knows that nothing is a bargain if they are not necessary.”  Even some retired naval officers argued against the systems. Former submarine captain Ed Gigg wrote that

Britain has every right to reap the so-called “peace dividend” by taking Upholder submarines out of service; but Canada should not consider adding to the British dividend by purchasing submarines for which there is no demonstrable need…

Similarly, Captain “Tex” Thomas argued that “In a time of changing focus for the fleet, increasing complications for funding and emphasis on versatility and flexibility, there is no justification for acquiring new submarines.” In sum, there is a long history of opposition to submarines in Canada, even from within the naval ranks.

The central problem with these arguments is that they are  oriented around the tactical use of submarines as weapons. First, it is difficult for Canadians to imagine a replay of the Battle of the Atlantic emerging once more at sea. Secondly, it is impossible for them to imagine Canadian crews deliberately targeting foreign commercial shipping in the same way that contemporary Canadians condemn our participation in the strategic bombing campaigns against Germany during the Second World War. Both of the above scenarios imagine how the vessels might be used in a specific circumstance, rather than considering the types of general options such a capability gives to a Canadian government.

We should consider, therefore, these options that open up to governments. Because of their inherent stealthiness, submarines they can:

Submarines are enormously difficult to find at sea.  In the Second World War, the huge casualties suffered by German wolf packs were partly caused by the speed of convoys that forced most submarines to attack on the surface where ships and aircraft could more easily attack them. However, modern submarines (particularly nuclear submarines) are much faster, which gives them the tactical manoeuvrability to attack while submerged. As the Royal Navy found out in the Falklands War, modern ASW was far trickier than in past conflicts. In 1982, Argentina possessed four submarines of varying capability. However, they effectively possessed a single submarine with which they could conduct offensive operations against the British task force. Facing that single submarine were parts of NATO’s North Atlantic ASW group, the ASGRU2, arguably one of the most experienced ASW forces in the world at the time. Despite the ASGRU2’s depth of experience, the Argentinians were able to conduct two attacks on the British task force, both of which failed due to technical malfunctions. Local acoustic conditions, however, rendered British forces helpless: over 150 weapons were released with no hits scored. According to the Argentinian Captain of the San Luis: “There was no effective counter attack. I don’t think that they knew we were there until they heard our torpedoes running.” The implication is that every weapon expended in the British ASW effort was against a false target (some of them whales).

Such operational difficulties exert a strong psychological effect on navies. Knowledge of an operational submarine in a particular area will often deter navies from entering it at all. Following the sinking of the General Belgrano by Conqueror, the Argentinian navy returned to port. The knowledge that the Canadian navy had deployed submarines to the Georges Bank in 1995 assisted in managing the crisis between Spain and Canada during the Turbot War.

The same features which enhance conventional deterrence also play an important role in intelligence collection. The ability to cruise undetected close to hostile shores demonstrates the utility of these vessels. During the height of the Cold War, American submarines were able to penetrate the ports of some of the Soviet Union’s most sensitive naval installations, conducting signals and electronic intelligence, as well as photographing the undersides of Soviet submarines. Submarines would be able to perform similar missions in other operational contexts, complementing the intelligence resources available to a naval or a ground force commander. Further, such missions might be able to collect intelligence unavailable by other means. Opposing forces can avoid or deceive satellite reconnaissance as long as the orbital periods are known. Long range high altitude aircraft, such as the U-2 and Global Hawk UAV are highly scarce resources which may not be available on short notice. Further, these and other aircraft may be detected, thereby warning the opposition that they are being watched. A submarine’s stealth avoids these problems. No other platform has the ability to covertly track, identify, and monitor vessels in fog conditions. “Bottomed out” submarines, resting on the sea floor, can conduct long range and long term intelligence operations in strategic waterways with little likelihood of being detected. Canadian submarines have been used in such purposes to monitor American fishing vessels thought to be illegally harvesting fish in Canadian waters and have supported counter-drug efforts in the Caribbean.

Lastly, given the difficulty in finding and communicating with submerged submarines, they are rightly considered solitary weapon systems.  However, in some circumstances, they can provide powerful operational support to other military systems. Under good sonar conditions and equipped with a towed array, submarines are capable of covering 125,000 km2 over a forty to fifty day patrol, whereas a surface task group of five to six ships, with a combined helicopter capacity of eight craft, has a continuous surveillance coverage of 192,000 km2 in a 30 day patrol. Thus, considerable resource savings can be had with submarines, especially given that Canada’s Victoria submarines are crewed by only 48 sailors whereas a similarly capable naval task group might have as many as 1400, not to mention the considerable fuel costs of a five ship formation compared with that of a single submarine.

Operating in conjunction with maritime patrol aircraft (MPA), submarines are able to assist in controlling enormous areas. Again, the sensors on board these vessels provide useful long-range information, however, the submarine’s ability to respond to that information may be limited by speed and safety considerations. Submarines operating with MPA (or even in the future, organically deployed UAVs) can pass on their target information, allowing the aircraft to conduct more detailed investigations of contacts that are far removed from the submarine’s position. This also has the benefit of allowing the submarine to remain covert.

Those arguing that submarines have no use in a Canadian context, thus, are thinking in very narrow terms about what types of threats they can imagine given the current political environment. They have difficulty envisioning how the Canadian government might employ the awesome capabilities characteristic to submarines in future operations, instead choosing to dismiss them as unnecessary.  There is a fundamental problem of using such logic to determine Canadian naval requirements. Our military contributions to Canadian security, whether exercised in terms of domestic operations or those in alliance, coalition or UN operations should be determined by our values and interests rather than the availability of specific military capabilities. Those who rely on the ‘capability argument’ avoid the difficult question of what, as a country, we are willing to fight for.

Clearly, as the history since 1991 has shown, there are some things that even the most war averse government has deemed necessary to support with military force. What those issues will be in the future is entirely unknowable, just as it was impossible to imagine the high intensity operations conducted by the Canadian army in Kandahar province in 2006/7, or the bombing operations undertaken by the RCAF over Libya in 2010. Submarines offer tremendous flexibility in how they can be used. While their acquisition costs are high, once acquired, their operations and maintenance costs can be quite low (the current costs afflicting Canada’s Victorias were explained in a previous entry).

Presently, most Canadian cities enjoy historically low crime rates, yet the argument that police forces can be dramatically cut is justifiably risible. That we have not experienced a fire or other natural disaster is hardly an argument for abandoning home insurance. Airports have relatively few crashes but none go without their own fire trucks. So it is with military forces. We purchase military capabilities not with the expectation that they will be used, but with the hope that they will prove entirely unnecessary.