‘Superiority in Aviation Alone’: Effects of Airpower on Canadian Operations on the Somme, Part II/II by Bill Stewart

‘Superiority in Aviation Alone’: Effects of Airpower on Canadian Operations on the Somme, Part II/II by Bill Stewart

As discussed in the first post of this two-part series, every phase of an attack was dependent on reconnaissance aircraft. There were three key types of missions – photographic, registration and artillery spotting, and contact patrols – and each will be discussed in this post along with examples of how they affected Canadian operations on the Somme.

Photographic Missions – Aerial photographs were essential for planners to determine the enemy defences, alignment of reserves, and state of the ground. The Germans were an adaptable and dynamic enemy, so it was imperative that the latest developments in German defensive arrangements were integrated into the planning for an attack. These photographs could also show to the skilled interpreter the extent to which artillery fire affected the defences, but they could also mislead as to the state of the defences. One of the factors leading to the failure of the 8 October attack on Regina Trench by the 1st Brigade was uncut wire on the attack front of the 4th Battalion. Two days before the attack, the 1st Division claimed the wire appeared in poor shape based on air photos, when in reality it was entirely intact. Long grass or rusted wire that had blended into the background made it difficult to identify the wire. Aerial photographs were also a way for the high command to check their subordinates’ reports and confirm their accuracy. For instance, based on aerial photographs, Gough chastised the Canadian Corps on 6 October for the poor layout of its front line trenches. 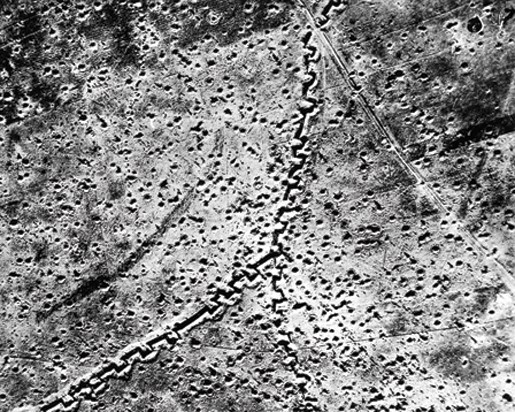 An example of an air photo taken during the Somme showing the junction of Regina and Kenora Trenches. Regina Trench was the scene of repeated failures by the Canadian Corps to capture the fiercely defended German position. (Library And Archives Canada, C-014151)

Registration Missions – Registration of artillery fire was essential. Registration was the process of a gun from the battery firing on a target, the shots observed, and corrections provided back to the gun by an observer either in an aircraft or balloon. This would repeat until the gun hit the target, at which point the remaining guns in the battery could open fire if needed. Registration was a slow process as only a limited number of batteries could register at one time, and it also gave notice to the Germans that an attack was imminent. For instance, the failure of the 10th Brigade attack on Regina Trench on 25 October was due partly to the artillery not getting into position in time to be accurately registered.[1] With the result, a participant in the attack interviewed after the war complained, with some exaggeration, that the barrage consisted of a single shell.[2]

Registration was necessary on the Somme because the artillery was not capable of shooting accurately based solely on map information, also called predicted fire – this would have to wait to late 1917 and 1918. The heavy artillery serving with the Canadian Corps was not experienced, as they averaged just over four months service in France, with the longest having served only seven months.[3] Post-Somme, the Canadian Corps artillery commander, Major-General Henry Burstall explained that most batteries had only one experienced officer, usually the battery commander, who had to remain with the battery. This meant the Forward Observation Officers were typically inexperienced and thus made it more difficult to get accurate fire from the guns. Finally, the lack of training, maps, and data, such as barometric pressure, wind conditions, gun calibration, and shell lot characteristics necessary for predicted shooting meant the artillery could not fire accurately at an unseen target without registration. 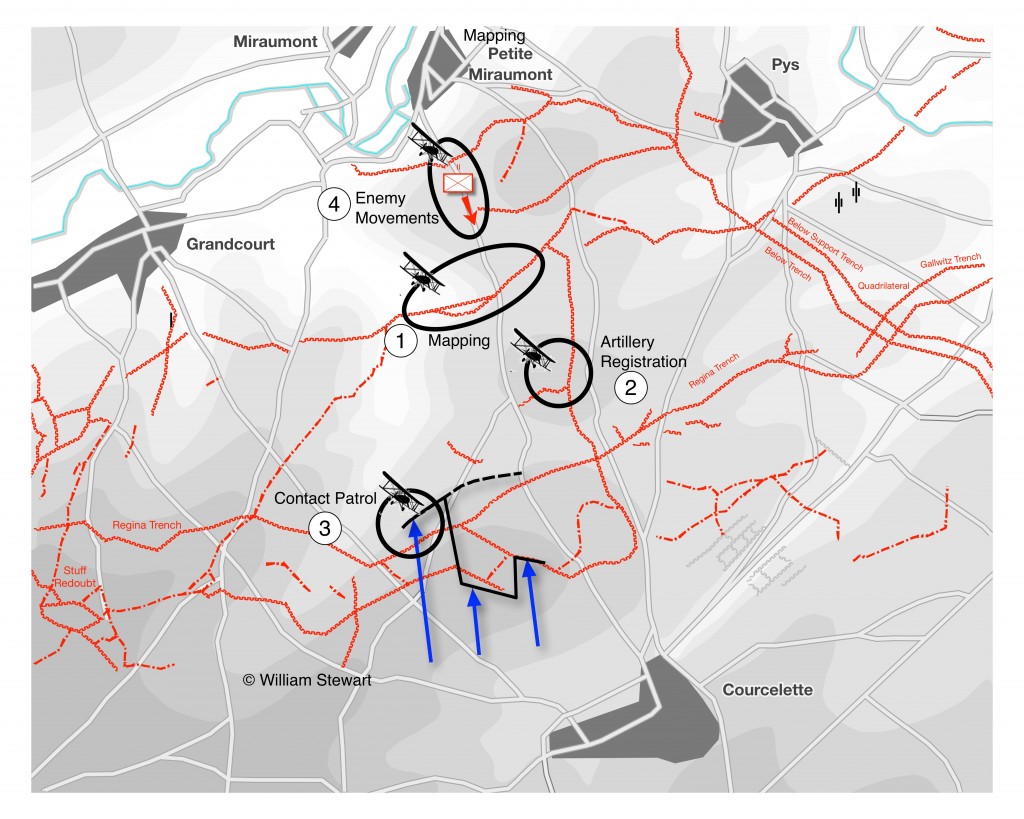 Air operations on the Somme

Contact Patrols – During the attack, aircraft tracked the progress of the assault, called contact patrols. These were relatively low-flying aircraft that used various means of identifying the location of friendly forces in an attack. The extreme limitations of signal communications meant it was virtually impossible for senior commanders to rapidly determine where their troops were in an attack, once launched. Observers, even in those situations where the attack was observable, were hard pressed to locate the forward forces. The usual situation meant waiting hours for runners to return from the new front line to report the situation, which often had changed in the interval. In ideal conditions, aircraft could shorten this lag of hours to minutes. For instance, at Courcelette on 15 September 1915, the 2nd Division received a dropped message from an aircraft at 7:30 a.m. of the front line from its patrol from 7:00 to 7:20 or a lag of only ten minutes. In another case, at Regina Trench on 8 October 1916, contact patrols were to run at one and two hours after zero hour, but this case the weather intervened and the first patrols did not fly. The Canadian Corps urgently requested multiple patrols during the day from the 7th Squadron to help locate what the troops were actually holding.

Aircraft would fly a prescribed route and sound a klaxon horn to announce their presence and operation orders instructed the infantry to light special flares carried for this purpose. Prior to reaching the Somme, all the Canadian divisions practiced working with contact patrols during their training out of the line. Later in the campaign after the troops had more experience there was an understandable reluctance by troops to use the flares, because the smoke gave away their position to the Germans. This failure was a matter of much frustration to the commanders in the post-battle responses to the corps questionnaire, as it appeared that troops used the flares in their first battle but were less likely in subsequent battles. This failure made it difficult for the observer to locate the troops and decide if they were German or Canadian.

The contact patrols also tracked enemy moves and could give notice of German reactions to an attack, such as reserves moving to a sector. It was easy to spot troops in the open ground but movement along trenches was much harder to determine. For instance, on 15 September the Canadian Corps received a report from the Reserve Army based long-range reconnaissance aircraft that the Germans were moving reserves towards the Canadian front.

Airpower on the Somme was a vital component of the Somme offensive, not for bombing and strafing but mundane observation missions. The loss of air superiority limited the ability to look over the hill, thus curtailing artillery effectiveness, which significantly diminished the offensive power of the Canadian attackers. The frustrating failures in front of Regina Trench in September and October 1916 were largely the result of the artillery’s inability to destroy or suppress German defences, without the expenditure of vast quantities of shells. The artillery’s inability was a function of the reduced sortie rate of observation missions caused by terrible weather and increased German airpower effectiveness.

[1] G. W. L. Nicholson, The Gunners of Canada; the History of the Royal Regiment of Canadian Artillery (Toronto: McClelland and Stewart, 1967), 269.