The Battle of Arras Centennial Commemorations 2017 by Jesse MacLeod 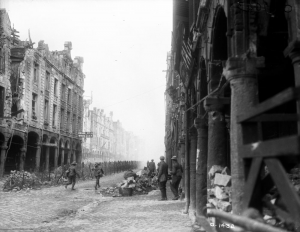 I have written before about the story of my great-grandfather and my experiences visiting the battlefields he fought and ultimately died on. In April, during my annual pilgrimage to Arras, I found out about a project organized by the Carriere Wellington and the City of Arras to mark the centennial commemorations for the Battle of Arras in 2017. The Carriere Wellington is part of the interconnected system of chalk quarries underneath Arras which were utilized by the British during the First World War, and is open to the public through guided tours which are well worth the price of admission.

The organizers are looking for descendants of soldiers who fought at Arras to send them photographs, documents, and stories to be used for making displays around town as well as exhibits at the small museum attached to the Carriere Wellington. As soon as I arrived back in Canada I got in touch with them to see if my great-grandfather’s story could be included. They were delighted to hear from me, and added him to their database. In addition to the collection of files and stories, descendants such as myself are invited to attend a dawn ceremony on April 9th, 2017 at the Arras Memorial. 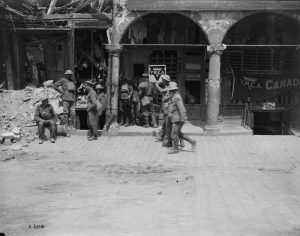 Aside from my own personal interest in the lovely town of Arras, and the battles which took place around it from 1914-1918, I feel that this is a very worthwhile project that deserves attention. Descendants of soldiers who served at Arras at any time are welcome, which opens the door for more Canadian participation. In addition to the Battle of Vimy Ridge, which was the northern extension of the 1917 Battle of Arras, the Canadian Corps broke through the German lines at Arras in 1918 during the 100 Days Campaign. The Arras sector was the main area of operations for the Canadians by that time of the war, in the same way that the ANZAC’s operated primarily around the city of Amiens in the Somme sector of the Western Front. For one reason or another, Arras often receives little attention in comparison to more iconic towns such as Ypres or Verdun, so the more people who get involved with this project the better.

So if you have any connections to the men who served at Vimy and Arras, I implore you to get in touch with the primary contact for this centennial project, [email protected] And if it is possible for you to do so, take a trip in April 2017 to Arras for the ceremony. It could turn out to be a profound experience which will add significant meaning to your life, as it has for me.