“The Canadian Army and the Procurement of the Bison: A Short History” by Frank Maas

The Militia, the traditional mobilization base for the Canadian army, withered during the Cold War. Its ranks were flushed with Second World War veterans in the 1950s and there was money for new tanks and vehicles, but morale declined as the Militia’s role became civil defence in the late 1950s, and it languished in the 1960s and 1970s as defence budgets shrank. The Militia reached a nadir of 15,000 by the late 1970s, but ironically, there was a false dawn at the end of the Cold War. In the 1987 Defence White Paper, Challenge and Commitment, the Mulroney government announced that the strength of the Reserves would skyrocket to 90,000, and would complement Regular units and allow Canada to better meet commitments to NATO and continental defence. This increase in strength would be complemented by a package of improvements to bases and new equipment purchases. One of these was for a purchase of 200 armoured personnel carriers, and here the story begins. 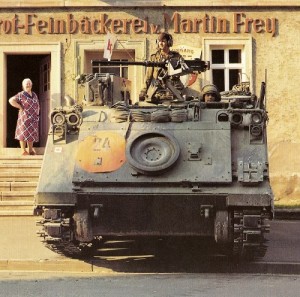 Example of one of the M113s in service in Germany during the Cold War. (www.canadiansoldiers.com)

Back then, Colonel Romeo Dallaire was head of the army’s department for assessing armoured vehicles. Dallaire was intent on purchasing the venerable and ubiquitous M113, which first entered service in the 1960s, and is one of the most numerous armoured vehicles in the world. (The Canadian army had purchased more than 900 in the 1960s, and fielded up-armoured M113s in Afghanistan). The original plan was to buy 200 M113s from the American manufacturer and have some components licence-built in Canada to fulfill requirements for Canadian content.

At the same time, however, Canada’s only manufacturer of armoured vehicles, Diesel Division General Motors (DDGM), in London Ontario, was nearly out of work. It was approaching completion of a United States Marine Corps order for 758 vehicles, and although some sales to Saudi Arabia were on the horizon for the early 1990s, the company was facing a year with empty production lines. Some salesmen and engineers at DDGM began to think they could scoop up the contract for two hundred APCs by substituting their vehicle, the Piranha Light Armoured Vehicle (LAV), and bridge the gap between the contracts. 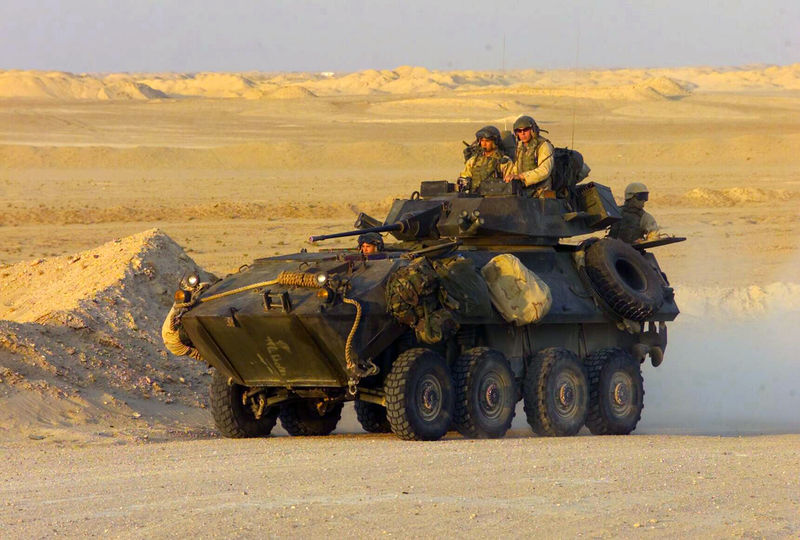 There were some significant differences between the Piranha LAV and the M113 that would complicate DDGM’s plan. First, the LAV was wheeled, and the M113 was tracked. Wheeled vehicles were easier to maintain, but tracked vehicles had better off-road mobility. Second, the sides of the LAV’s troop compartment sloped sharply inward, which improved ballistic protection, but reduced internal space. Finally, the LAV had doors at the back for soldiers to deploy from, while the M113 had a ramp which made it much easier for soldiers to run out of the back of the vehicle. DDGM’s engineers could not do much about putting tracks on the LAV-25, although a wheeled vehicle would be better-suited for service with the Reserves because it would be cheaper to operate and soldiers could drive it on roads. (There are prohibitions against driving tracked vehicles on roads). DDGM could reconfigure its vehicle to look more like a M113 from the back to convince the army to accept the LAV-25 as a substitute, but this would require a significant reconfiguration of the vehicle.

Two engineers at DDGM got to work. They took a small scale model of a LAV, but cut off the existing troop compartment and replaced it with a large box on the back with a ramp like the M113. This would increase internal capacity, make it easier for troops to get out, and hopefully convince the army to buy DDGM’s product instead of M113s. Most importantly, it would DDGM’s production lines from going down for a year. Dallaire, however, would not budge, so the company started to flex its lobbying muscles in 1988.

The company had backing in Cabinet: the finance minister from 1984 to 1991, Michael Wilson, supported DDGM, and one of his deputy ministers was from London. This support, or at least lack of opposition, was crucial. The company also had the support of the army high command at Forces Mobile Command headquarters in St. Hubert, Quebec. The engineers and executives at DDGM thought that a prototype might finally win Dallaire over, and they knew that the defence minister, Perrin Beatty, or one of his deputies was going to be at Canadian Forces Base Borden for Armed Forces Day in 1988. Borden was less than three hours from London, and if DDGM could put together a prototype, they could drive it up to the base for the parade on June 5, 1988. 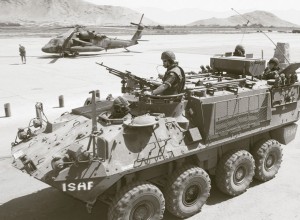 DDGM had precious little time to make a prototype. The engineers secured a vehicle that had been used in tests to see if the LAV-25 could be dropped from transport aircraft, and started by cutting off the troop compartment. They kept the suspension, drive-train, and front half of the vehicle intact, but cut armour plate piece by piece and welded it onto the vehicle to make a large box instead of the LAV-25’s sloped sides. They fashioned a ramp on the back of the vehicle so that soldiers could easily run out the back, and they replaced the turret ring with a large folding hatch on the roof so that they could load the vehicle easily. After eight days of work, the “Bison” as DDGM termed it was assembled, painted, and ready.

They drove it up to Borden and the demonstration was a success. Defence Minister Perrin Beatty came on board, but stated that he would not force the army’s hand and make it purchase a Bison instead of an M113. DDGM sent one of its lobbyists to Ottawa to work on Dallaire. He argued that the Regular Force would simply requisition new M113s, and second, that even if the vehicles got to the Reserves, they would have trouble operating them. There were restrictions against putting tracked vehicles on roads in Canada, and the Reserves would likely not have the personnel or money to keep up with the maintenance burden. Dallaire was stubborn, but the army finally decided to buy the Bison in July 1989. DDGM had to reverse-engineer their own prototype, and produced four major variants – 149 armoured personnel carriers, eighteen command posts, sixteen 81 mm mortar carriers, and sixteen maintenance and recovery vehicles. 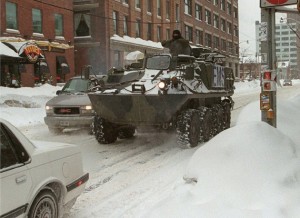 Ironically, the original rationale for the purchase – to increase the quality of Reservist training so that they could beef up Regular units and bolster Canada’s commitments to the Cold War – disappeared as the first Bisons started rolling off the production lines. The Cold War was ending, but the disorder of the 1990s and the proliferation of peacekeeping missions that morphed into combat operations meant that few vehicles ever got to the Reserves. Most were requisitioned by the Regular Force and pressed into service. For example, Bisons were rapidly overhauled to serve as ambulances in Somalia, and they were also used as command posts in Bosnia. One Bison was even in Toronto for the ice-storm cleanup in 1999! The Bison was not designed to be a combat vehicle, but it has carved out a niche as a lightly armoured, multi-purpose vehicle that is well-suited to serve in ancillary battlefield roles. 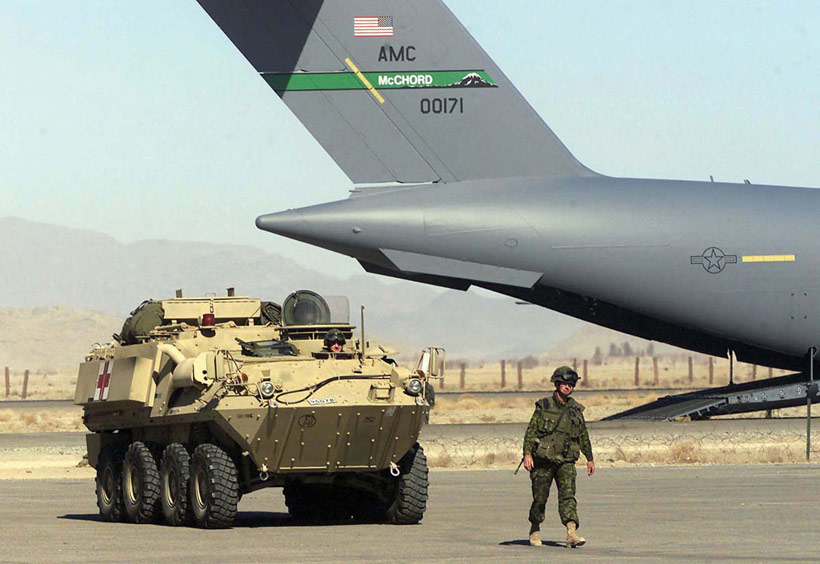 An example of a Bison ambulance in Afghanistan.